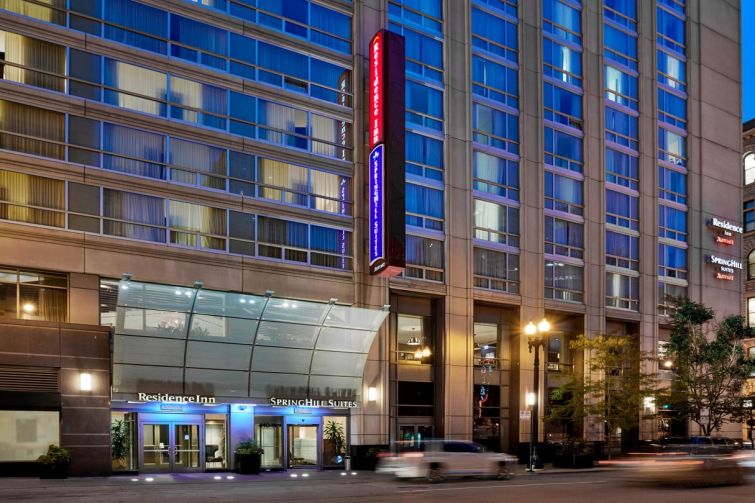 A loan for Marriott Chicago River North Hotel (pictured) has been in special servicing since July 2020. Photo: Marriott

“Pockets of distress have materialized across various markets in the office sector over the past month. Birmingham, Ala., New Orleans and Baltimore exhibited the highest increases in office distress, accounting for three of the top 10 increases in distress by market sector in February 2022. The Birmingham market was impacted by two office properties — Wells Fargo Tower and Inverness Center — transferring to special servicing. The two properties, along with an office building in Columbia, S.C., secure a $129.2 million mortgage that is at risk of imminent monetary default, according to the latest servicer commentary.

“In addition to office, the retail sector exhibited some volatility, accounting for three of the top 10 increases in distress and three of the top 10 decreases in distress. The Nashville retail market benefitted from a decline in distress following the cure of CoolSprings Galleria — a 640,176-square-foot regional mall that secured a $145.6 million mortgage. The loan had transferred to special servicing due to the bankruptcy of its sponsor, CBL Properties. CBL Properties was able to complete a restructuring, which then enabled the loan to return to the master servicer. CoolSprings Galleria is one of CBL Properties’ higher-quality regional malls.

“Another sector with notable improvements in February was the Chicago hotel market. The improvement was primarily driven by a delinquency cure of the $95.9 million Marriott Chicago River North Hotel and its subsequent return to the master servicer. The loan had been in special servicing since July 2020. Despite the improvement, the rate of distress for Chicago hotels is still one of the highest among the top 50 MSAs, equal to 43.9 percent this month.

“The distressed rate for the Louisville, Ky., market improved this month after the $73.6 million Oxmoor Center loan returned to the master servicer as a corrected mortgage. The loan was modified and its maturity date was extended from June 2021 to June 2024. Oxmoor Center is a 941,756-square-foot regional mall, owned by Brookfield Properties, and features an Apple store as one of its primary drivers of traffic. Anchor boxes include Macy’s, Von Maur, Dick’s Sporting Goods and a vacant former Sears. As a result of this loan’s return to the master servicer, the Louisville market had the greatest month-over-month decline among all rates of distress; however, Louisville still has the second-highest overall distressed rate among the top 50 MSAs.

“The Minneapolis MSA has the highest overall distressed rate at 22.9 percent, which was slightly lower than the prior month. Louisville (17.9 percent), New Orleans (13.9 percent), Cleveland (11.8 percent) and Milwaukee (10.1 percent) comprise the remaining markets with the highest rates of distress. The Raleigh, N.C., market (0.28 percent) had the lowest percentage of distress among the top 50 MSAs for the second month in a row. Additionally, Boston (0.91 percent) exhibited recoveries in delinquency and special servicing to rank as one of the five markets with the lowest amount of distress.”