The enclave’s fortunes have shifted with its commercial tenants — hello, Microsoft and Facebook — and its residential developments 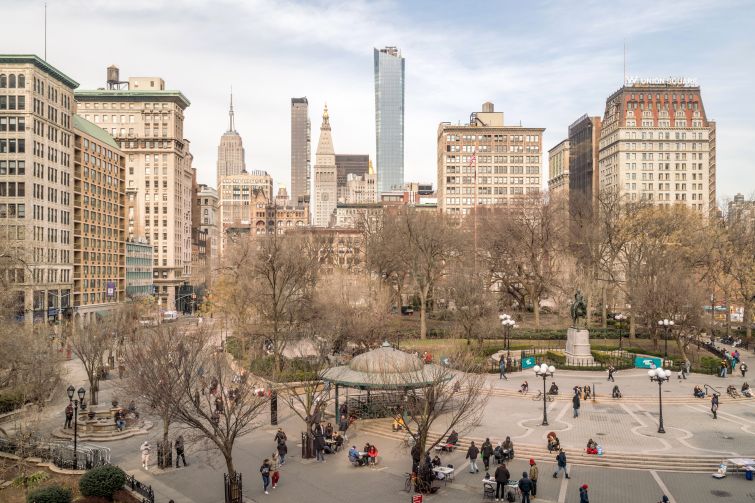 Union Square is a place where New Yorkers naturally congregate when they feel strongly about something,” said Jennifer Falk, the executive director of Union Square Partnership, a business improvement district (BID) for the Midtown South neighborhood.

Historically, Union Square, which spansBroadway to Fourth Avenue, and East 14th to East 17th streets, was home to the world’s top publishing companies as well as a hub for home furnishing and interior design studios. This paved the way for many creative agencies to land in Union Square, including Andy Warhol’s renowned art and film studio, The Factory.

The creative engine of Union Square kept expanding. Consolidated Edison is a long-time tenant, at 4 Irving Place, as are the New School and New York University, the latter which has residence halls in the neighborhood.

Another major player that emerged from the neighborhood is Zero Irving, a technology campus and small business incubator at 124 East 14th Street. RAL Development, with financial backing from Junius Real Estate Partners, finished its construction in 2021, designing Zero Irving to include 14 floors of market-rate Class A office space with flexible lease terms available for growth companies. Other components include an education and training center, a tech incubator, coworking spaces and a 10,000-square-foot food hall managed by Urbanspace.

“We’re really excited to bring the next chapter of that site to the neighborhood,” said Spencer Levine, president of RAL Companies & Affiliates. “There are so many time periods and cultures reflected in Union Square. It’s not like any other place in Manhattan. We want the space to serve as an ecosystem where people in the digital skills training facility can come and learn the relevant skills.”

The area has drawn high-profile commercial since its birth.

Commissioned by Charles Lewis Tiffany in 1869, Tiffany & Company built its headquarter at the south corner of West 15th Street and Union Square West. In more recent times, the building was purchased by Brack Capital Real Estate in 2006 and reopened in 2008 as high-end apartments.

Union Square also became one of the most vibrant areas for commerce due in part to itsresidential population.

“I would say the Zeckendorf building at the corner of 14 Union Square East was probably the change in the neighborhood that brought in higher-end apartments and better stores,” said Jeffrey Roseman, vice chairman of Newmark. The Zeckendorf Towers building, also called One Irving Place, is a 29-story, four-towered condominium complex completed in 1987.

Microsoft recently announced it would consolidate its New York City offices into one flagship space at 122 Fifth Avenue. Buzzfeed and Facebook have their offices close by at 111 East 18th Street and 225 Park Avenue.

“There’s a deep demand in Midtown South for boutique-sized space in brand-new buildings,” said Jane Luger, vice president of Taconic, the firm that acquired 817 Broadway in November 2016 and renovated the historic site formerly known as the Sprague Building into a boutique office building. “We’ve almost tripled our occupancy within the past nine months.”

The foot traffic brought by the office workers and residents makes Union Square particularly fertile ground for retail. Retail spending in the area increased 74 percent from March 2020 to March 2021, including e-commerce, and total trips to Union Square across all mobility was up 57 percent, according to a market report from the Union Square Partnership.

“Union Square is the perfect example of the major variables as to what makes retail strong,” said Brandon Singer, founder of Retail by MONA, a retail brokerage currently representing the retail space at 31 Union Square West. “This space, without question, is one of our top listings that has [a lot of] interest from great companies. It is one of those corridors that I think is constantly evolving with great tenancy and great brands and companies.”

Not surprisingly, as of this March, 63 businesses have opened in Union Square since 2020, pandemic or not, according to Falk.

“It has so many different day parts — you’ve got schools, residents, offices, tourists, restaurants, nightclubs, great shopping,” Roseman said. “If a prospective retailer was looking at different neighborhoods, Union Square was always viewed as no matter when you were there, there was always something going on, and there were always people there.”

The Union Square Partnership BID’s mission includes keeping the neighborhood clean and safe, in part through providing essential services. The nonprofit has been a marketer for local businesses and a huge booster of the hospitality and tourism industries in the area.

“Every year, we take on a series of projects in order to improve the neighborhood,” Falk, the BID’s executive director, said. “We’re pushing hard on the message that Union Square-14th Street is open for business. We are also pushing hard on this idea that when you are reuniting with friends and family, you should come to Union Square.”

It’s perhaps an easier lift than it was in days past.

“A lot of people think Union Square got the name from union protests or they think it means Union Army during the Civil War, but it actually goes back to when the grid system was first laid out,” said Kevin Draper, a historian and co-founder of New York Historical Tours. “They called it Union Square because of the union of two streets: Bowery and Broadway, then known as Bloomingdale Road.”

In the original grid plan for Manhattan, the angle that these two roads would meet was considered too unwieldy to be practical. Hence the development of open, public space at the spot — which is now a crossroads of so much activity. “It becomes the heartbeat of the city,” Brause said.