City plans to demolish the Manhattan Detention Center and replace it with a bigger jail have drawn protests from Chinatown residents who would rather see a gut renovation of the current property. 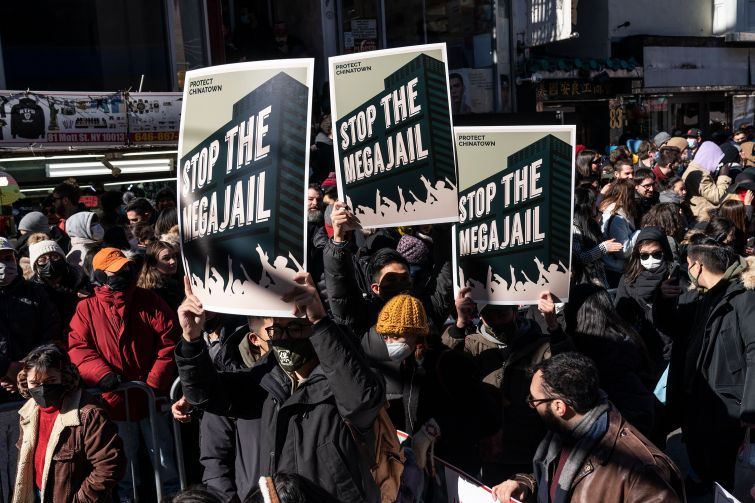 One of the newest towers planned for Lower Manhattan will not host fancy condominium units nor amenity-rich office space.

Instead, it is expected to house more than 800 prisoners by the end of the decade, but community advocates are mounting a last-ditch effort to convince the Adams administration to take another look.

On Feb. 6, more than a hundred Chinatown leaders and activists rallied on the steps of 125 White Street, the site of the city’s current Manhattan Detention Complex (MDC), long-ago nicknamed the Tombs, demanding the city delay its demolition and therefore halt construction of a new corrections high-rise that could end up being twice its size.

Two weeks later, activists crashed the neighborhood’s Lunar New Year Parade and gave Mayor Eric Adams and other politicians marching in the event an earful about the harmful effects of a new jail construction project.

“What we have to do is continue to be very loud, vocal and fervent in our position,” said Jan Lee, founder of Neighbors United Below Canal (NUBC), a neighborhood activist group opposing the jail. “Why are we ignoring that we went through a global pandemic, that we have a health care shortage, and that maybe this money should be spent in communities that feel the impacts of the criminal justice system?”

The borough-based jails should be a done deal. In 2017, then-Mayor Bill de Blasio unveiled an $8.7 billion proposal to build four smaller facilities across the city, after receiving pressure from criminal justice advocates and progressive leaders to develop a plan to close Rikers Island permanently.

Two years later, the City Council approved the plan that would shut the city’s main corrections detention center by 2027. Six design-build firms were competing to build the four jail complexes as of December 2021 and the city has requested detailed plans from them by this fall for the construction of each site.

But the borough-based jail plan has been wildly contentious since its inception. NUBC sued to block the Manhattan project in Chinatown, claiming the city failed to consider its far-ranging environmental and health impacts. In April of last year, a state appellate court overturned a lower court’s ruling that had temporarily stopped the project. Advocates said they are considering other legal measures.

Opponents of the project have also won political office. Christopher Marte, an NUBC co-founder and vocal jail opponent, won a Lower Manhattan Council seat and has vowed to fight for an alternative. Manhattan District Attorney Alvin Bragg, who took office in January, has emphasized decarceration and opposed the jail project while campaigning in the neighborhood. Adams said he would support shuttering Rikers on the same timeline but the city must reconsider the Chinatown-based jail complex while on the campaign trail last spring.

“I do not support building the jail [in Chinatown]. I believe we’ve dumped on the Chinatown community long enough,” Adams said at a mayoral forum hosted by the Asian American Federation in April 2021.

The mayor has avoided antagonizing either side. Adams aides promised he would release a comprehensive Rikers plan once in office but that hasn’t happened yet. A mayoral spokesman said the city is committed to closing Rikers by 2027 and will continue to “meet with communities, hear their concerns, and incorporate their feedback into the ongoing process.”

A spokesperson for Marte said he is “confident that [Adams] is listening to the community.”

Meanwhile fences and scaffolding could envelop White and Centre streets in the coming weeks. Residents want the mayor to delay the site’s demolition and consider alternatives from the de Blasio master plan.

“Why would Adams take on the vision of a very unpopular man who made horrible decisions?” Lee of NUBC said. “All the risk is going to be his. He needs to reevaluate this plan.”

New life for the Tombs

The $1.7 billion Manhattan correctional facility is expected to include enough beds for 886 inmates, roughly the same number as the existing jail complex. But its design and height have not been finalized.

The de Blasio administration’s initial proposal was to erect the 40-story detention center at 80 Centre Street. In November 2018, city officials swapped that for a 50-story, 520-foot structure on the MDC’s current White Street site that would take up 1.5 million square feet. A few months later, the city slashed its height to 495 feet, decreasing its dimensions to 45 stories and 1.3 million square feet with 1,440 beds. Even with the changes, city officials continued seeking input for how to reduce the complex’s footprint even further.

By the end of 2019, former Council member Margaret Chin reportedly got the city to drop the height of the jail structure to 295 feet although its square footage remained close to 700,000 square feet.

Administration officials wanted each jail site to include enough swing space in case the jail received a sudden surge of detainees. But much of the expanded space would go toward providing educational and job training programing, gym, medical care and mental health facilities on site.

Some advocates questioned whether those resources would be better deployed in the communities from where inmates come.

“It sends a message to people in the neighborhood that we’re not investing in resources for the community in a pandemic like affordable housing; we’re investing in other things that won’t benefit the city at all,” said Alina Shen, lead organizer for CAAAV Organizing Asian Communities, an immigrant community group.

In the final days of the de Blasio administration, the city chose two construction firms, the Gilbane Building Company and the Alberici Corporation, to submit a joint proposal by the fall for the Manhattan site. The request for proposal hasn’t been given out yet, but both companies have the inside track. A $125 million contract for the demolition of the site has already been awarded to the Gramercy Group.

But it is possible that none of those features such as a gym and on-site medical care end up in the final proposal. The new jail complex is a design-build project instead of the usual low-bid process, where the developer and the city can scale back the project as it goes if costs run too high or are needed elsewhere in the budget.

“The city can take the aesthetic portion of this and just end up with the pure functionality of what they need to do to build the jail,” Lee said. “We could be left with something that only fulfills the purpose of the building without having any consideration to what the building looks like or how it integrates into the neighborhood.”

Demolishing a 150,000-square-foot building is no simple matter.

The Manhattan Detention Complex contains thick walls of concrete and reinforced steel, and work razing both buildings isn’t expected to be completed until fall 2023. That could mean up to a dozen diesel-powered dumpster trucks a day hauling chunks of refuse for the next two years, five days a week, starting as early as 7 a.m., residents estimated.

Chinatown residents have questions about how many trucks there will be, where they will idle, which routes they will take, and how demolition crews will limit noise and dust from spreading throughout the neighborhood.

“We have lived with a jail in the neighborhood for decades but this new destruction and rebuilding will cover the neighborhood with construction debris for 10 years and will be devastating to Chinatown,” Caitlin Kelmar, an aide to Council member Marte, said.

The demolition will also affect several surrounding buildings. One of them is the Chung Pak senior center, a 13-story residential tower that shares an adjoining wall with the MDC on Baxter Street. The center was created as a community benefit during the jail’s last major renovation nearly 40 years ago. Many seniors in the building are between 80 and 100 years old, and are worried about the vibrations, diesel fumes from idling trucks and dust that could get kicked up during the teardown.

The building’s construction will also be challenging. The MDC currently sits on a swamp so workers will have to excavate deeper and sink pilings 100 feet into the ground to stabilize the site.

Then there are the views. Condo owners in the area may not realize that a 35- to 50-story jail will be joining the neighborhood’s skyline over the course of the decade. Commercial Observer contacted 10 developers whose projects are in Lower Manhattan. None would comment on the jail.

“There’s new people buying very expensive real estate who may not know that this is on the horizon,” NUBC’s Lee said. “What used to be the beacon for Chinatown used to be Confucius Plaza. Now the beacon is going to be the jail. That’s not how we want to be remembered.”

The mayor still has time to pause demolition and revisit the project if that’s what he ultimately decides to do.

Activists with NUBC and some public officials want the Adams administration to consider a gut renovation of the existing Manhattan jail complex, whose last serious rehab occurred in 1983. A renovation would be less costly than ground-up construction, especially since the number of beds would remain roughly the same.

It would also bring inmates back to the area more quickly. At the end of 2020, the city quietly emptied out the MDC and moved about 750 prisoners to Rikers Island. Closing the MDC has contributed to overcrowding at the Rikers complex, where at least 16 people died in custody in 2021.

Another alternative would be to add a new corrections facility in Staten Island, the only borough excluded from the city’s borough-based jail plan. De Blasio promised in 2017 the city wouldn’t build a jail there, which went against the recommendation of an independent advisory commission that examined how to decommission Rikers.

Chinatown advocates insist Adams pause the Manhattan jail demolition for other reasons too. A spate of assaults and hate crimes against Asian Americans that has terrorized the community throughout the pandemic has not relented in 2022.

“Chinatown has suffered way more psychologically; we are not ready for this jail,” Lee said. “We’re really pissed. We’re tired, angry and not prepared for this in any way to turn this community upside down.”