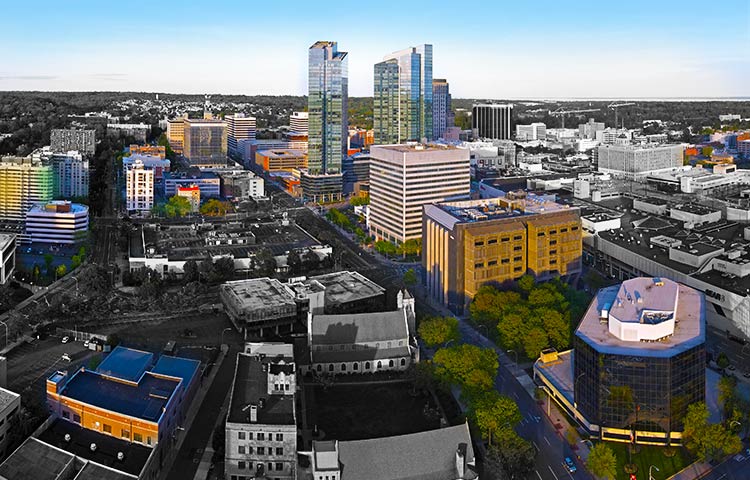 According to a report by Newmark, Westchester’s office leasing in the fourth quarter of 2021 was filled with positive signs.

“The Westchester County office market finished 2021 in a stable position,” said Newmark. “Leasing activity in 2021 reached 2 million square feet, on par with the county’s pre-pandemic five-year annual average from 2015 to 2019. Demand during the fourth quarter reached a post-pandemic high of 542,000 square feet, enhanced by large deals signed in the East I-287 market and midsize deals in Downtown White Plains. Improved leasing resulted in positive net absorption of 153,750 square feet this quarter and pushed the overall availability rate down to 25.1 percent, from 25.7 percent last quarter.”

So, while the availability rate shows that progress still has a way to go, the market is improving from the worst of the COVID doldrums.

“The current state of things is improving. It’s definitely on the right track,” said Mitchell Marcus, audit partner at Berdon LLP Accountants and Advisors. “The fourth quarter was the best we’ve seen since the beginning of the pandemic. Office demand was the strongest it’s been, and asking rents the highest they’ve been in two years. The key indicators for the office market are strong and getting stronger.”

Marcus pointed to several recent deals that illustrate how the office sector in Westchester is thriving. Those include a lease for 167,270 square feet in Hawthorne for TierPoint; a 105,000-square-foot office lease at 333 Westchester Avenue in White Plains for Amalgamated Life Insurance Company; and a lease for 187,181 square feet for the New York Blood Center at 601 Midland Avenue in Rye, the top lease transaction in Westchester for 2021.

Office has been one of Westchester’s strongest sectors of late. While retail has battled greater problems, the sector has shown some signs of life. According to Houlihan Lawrence, the fourth quarter of 2021 saw the fundamentals of Westchester retail improve for the second straight quarter, with newly leased space at higher numbers than vacated square footage. Occupancy and lease prices also rose.

Still, the sector is hardly out of the pandemic woods overall.

“Retail took a hard hit during the pandemic,” Marcus said. “Retail in Westchester is a vital sector, simply because with Westchester being a suburb, you really want that small town feel of being able to walk downtown, shop and go to restaurants, movies, theaters, gyms, etc.”

But Marcus noted that several high-profile retail openings set for the near future provide a cause for optimism. Target is set to open two Westchester outposts, one each in Port Chester and Yonkers, and the White Plains Mall is set for a massive redevelopment to include retail, office and multifamily across four buildings.

On the multifamily side, 2021 was a strong year. A June 2021 article in Westchester Magazine noted that “the Westchester County new construction real estate market is rebounding from the pandemic-induced slowdown of the last year,” and listed nine major residential developments either just opened or in the planning stages. These included Carraway, a 421-unit luxury apartment development in West Harrison, and The Marquee, a 10-story, 160 unit building in Yonkers.

“It’s exciting to me as somebody who loves urban areas to see that after years of effort in cities like White Plains, New Rochelle, and Yonkers, planning is finally coming to fruition with buildings opening,” Gertman said. “These are places where maybe you would see one new building open every couple of years, and now you have multiple buildings opening in a year. That can create short-term supply shocks, but in these areas over the medium- and long-term, more is more. You need 5,000, 10,000 people in these concentrated downtown areas to get the kind of economic activity and street life that makes restaurants and retail and all those fun things viable, and that’s starting to happen.”

As for industrial, a 2021 year-end report from RM Friedland shows that the pandemic’s sturdiest sector is just as in-demand in Westchester as elsewhere in the country.

“All over Westchester, new buildings are popping up,” reads the report, which notes that the availability of industrial space in Westchester ended the year at an annual low of 6.45 percent. “In Armonk, the old La Quinta Hotel & Suites was torn down, making room for a new, modern industrial building totaling 72,000 square feet. Simone Development renovated the former Montefiore Hospital in Mount Vernon at 250 East Sandford Boulevard into 107,000 square feet of industrial space as well as gutting and redeveloping part of 1 Zeiss Drive, which they purchased just over two years ago. The asking price for the nearly 100,000 square feet there is in the low twenties, on par with Westchester’s best industrial and flex space.”

“Industrial is on fire,” Marcus said. “Anything industrial near major highways is so in demand that prices are through the roof. Industrial property is, has been and will continue to be the most sought-after property in Westchester.”

Overall, Marcus sees a rise in Westchester CRE driven by a strong desire to emerge from the pandemic, as well as an exodus from New York City of people and families who sought more living space for their housing dollar. With omicron fading and New Yorkers bursting to get back to normal life, the prognosis for Westchester CRE in 2022 is as promising as it’s been in some time.