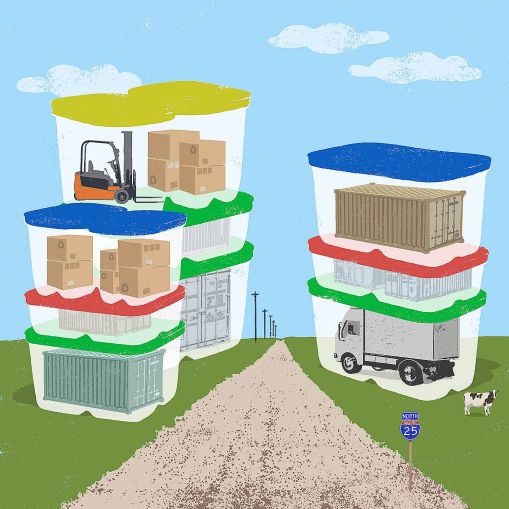 The subset of industrial first began to take hold in commercial real estate circles in 2019 and the COVID-19 pandemic has only accelerated demand for it as companies seek out more space to keep up with rising e-commerce orders. The typical infill nature of IOS properties means limited supply, which results in bigger residual values than traditional industrial assets.

“We like the sector and we think that it’s one of the few places where it hasn’t been saturated yet,” said David Perlman, the managing director of capital markets at Los Angeles-based lender Thorofare Capital. “We’re seeing a lot of momentum.”

IOS has drawn a small but growing number of CRE players looking to capitalize on multiple positives the sector can deliver, such as limited supply, low vacancy rates and predictable expenses with far more limited upkeep than warehouses.

Zenith IOS launched late last year as a platform that targets low-coverage industrial sites utilized by a vast array of owner-operators and tenants who are seeking outdoor space for vehicle parking, container storage, construction supplies, machinery and materials storage along with other uses. The Brooklyn-based firm joined forces in early February with JPMorgan Chase to launch a new $700 million IOS joint venture that will look to acquire urban infill industrial locations in major cities. It is planning to deploy the $700 million over the next 18 to 24 months, and anticipates closing $125 million in acquisitions by the end of February.

Benjamin Atkins, the founder and CEO of Zenith IOS, said the impetus for targeting IOS derived from previously working in the self-storage business and noticing that many potential industrial sites were being taken offline for other uses like last-mile distribution centers. At the same time, demand for IOS was only growing from the tenant side.

“When we became aware of the attractive metrics on IOS as an owner and rental strategy, it had another significant benefit in our mind, which is that it’s very industrial adjacent,” Atkins said. “These were not sites that were attracting a lot of institutional owners, both given the size and the fragmentation and the gross dollars involved in individual asset purchases, so it was also attractive from not just an operating perspective, but from an acquisition perspective.”

Atkins said there has been growing pressure on outdoor storage rents for the last three or four years, which the pandemic further exacerbated due to increasing e-commerce use and supply chain disruptions. The IOS sector has begun to take hold as a more serious CRE asset class in the brokerage community within the past six months, he said, and it will only increase as demand for outdoor industrial continues to soar with warehouse developers facing obstacles in designing structures that can still allow sufficient parking.

Thorofare Capital began lending on IOS developments around late 2020 and today has around seven sponsors approaching the firm about crafting borrowing strategies with capital dedicated toward these assets. Perlman said financing IOS projects can prove more challenging than more conventional CRE properties since they typically involve smaller deals with short-term leases and often face environmental issues. But IOS projects also present opportunities for cash flow along with an entry point into an industrial space in great demand.

“That’s the real challenge with this product — that people are trying to find loans, but a lot of people don’t want to spend time on the small deals,” Perlman said. “We’re trying to work with sponsors and do it on a repeat basis as they go out and try to buy these pieces of essentially land that is zoned industrial for trucking container storage.”

Lenders also say that IOS loans are attractive because they often mean higher yield opportunities that price around 5 to 7 percent with spreads that are 250 to 500 basis points wider than traditional industrial deals, depending on the location.

Zenith is in the process of closing a new credit facility for IOS deals in the next two months, and Atkins said there has been positive feedback from lenders on the proposal because of the cash flow of these assets. He said lenders also like IOS because they do not present some of the potential challenges found in deploying capital for the acquisition of existing buildings.

Another advantage is that IOS does not pose many of the restrictions that traditional warehouses sometimes do, including local limits on how much trucking can be stored on their sites. Perlman said IOS sponsors are looking to “institutionalize this product type by upgrading their properties with cross-dock truck terminals, better security, fencing and pavements.”

“There are a lot of people out there now looking for sites and speaking to owner-operators that have these truck terminals or truck sites that they’ve owned forever and they’re trying to buy as many as possible,” Perlman added. “I think in a couple of years you’ll probably see the market pretty saturated and then I think you’ll see some consolidation as people kind of build these portfolios up and then sell them to an institutional investor who maybe wants exposure to it, but doesn’t want to take the time to aggregate the portfolio.”

Industrial’s overall success, too, has made buying warehouses more expensive, with the assets often trading at cap rates between 3 and 4 percent. IOS benefits from all of the same supply and demand tailwinds, but with more “compelling yields” that can attract more investors, said Dan Haroun, a co-founder and partner at Catalyst Investment Partners, a Manhattan financial firm specializing in IOS.

Catalyst recently closed its first IOS fund with $54 million of commitments and is anticipating acquiring $160 million in properties across major East Coast markets over the next two years after leverage. It closed its first two acquisitions in early February — a 3.25-acre property at 405 North 37th Street in Pennsauken, N.J., for $2.5 million and a 3.1-acre site at 350 Pigeon Point Road in New Castle, Del., for $1.9 million. Both properties are industrial zoned with excess yard space for storage of trucks, equipment and materials.

“IOS properties are just as important to end users as the warehouses themselves, but have long been a forgotten piece of the industrial real estate sector since they’re not sexy,” Haroun said. “We see the space maturing and consolidating over the next three to five years in a way that mirrors what’s happened in the manufactured housing and self-storage sectors.”

Thor Securities has also made headway in the IOS space of late, including the acquisition of a 126,000-square-foot outdoor storage yard at 2750 West 35th Street in Chicago’s South Side for $7.2 million last October, according to property records. The Manhattan-based real estate investment firm acquired, too, a 33,870-square-foot truck terminal at 2940 West 36th Street, along Interstate 55 in the same neighborhood, for $4.1 million.

Daniel Laub, who co-founded Zenith IOS with Atkins, sees a unique opportunity to improve the user experience for industrial tenants at IOS sites by improving lighting, security and drainage. He said IOS is in the “early innings,” but the early players will be well-positioned to gain a major foothold in the sector.

“This is a multi-$100 million asset class and we think there’s a lot of runway in this space,” Laub said. “There aren’t many times as a real estate investor that you feel like you can participate in the growth of a new asset class.”