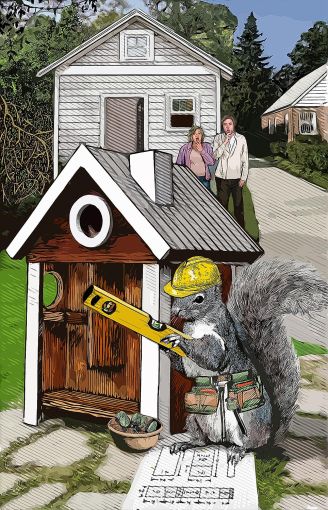 It seemed like a political no-brainer: Gov. Kathy Hochul had a plan to legalize more residential space and potential housing — something that presumably everyone wants.

But it got chased away like a fleet-footed Central Park squirrel.

Stiff suburban opposition forced Hochul to axe a proposal that would have dramatically altered local zoning controls by legalizing supplemental units on residential homes, but the concept could still take flight, albeit in a less dramatic form, to help combat New York’s affordable housing challenges.

Hochul’s failed plan, which she pulled from her executive budget on Feb. 17, had called for enabling accessory dwelling units (ADU) for converted garages, attics and basements of single-family homes in a move that would have required municipalities to change zoning laws that for generations have made these living spaces illegal. In addition to creating more rental apartment options, the Democratic governor had argued that the measure would also generate a new source of income for homeowners in high-cost areas that would enable them to stay in their homes rather than flee to other states.

The measure faced pushback, however, from both Republicans and Democrats in suburban areas, particularly in the New York State Senate, over fears that a widespread legalization of ADUs would create overcrowding in residential neighborhoods. Hochul said she will now instead create a task force with local government officials in an attempt to retool the proposal as one that can build support.

The governor also said she would continue to push for a piece of the original ADU proposal that aims to bring these existing units located in New York City into compliance with building and safety codes. Many ADUs in the Big Apple were enacted without zoning approvals, and they were brought under the microscope last September after some residents died when their basement apartments flooded during a massive rainstorm from the remnants of Hurricane Ida.

“We agree that we must begin to bring these homes into the sunlight and provide a pathway to compliance with building code requirements,” Hochul said in a statement.

“This is imperative, and the larger conversation about accessory dwelling units across the state must not prevent critical progress in New York City from moving forward.”

Efforts to expand ADUs throughout the Empire State by Hochul mirrors similar legislation in California signed by then-Gov. Jerry Brown in 2016 that forced municipalities to relax regulations on these units, also often referred to as “granny flats” or “mother-daughter apartments.”

Jay Martin, the executive director of landlord group Community Housing Improvement Program, supported Hochul’s proposal and was disappointed she rescinded it so quickly from budget discussions. He said she could have organized a better education campaign in suburban areas about the benefits of ADUs to homeowners in terms of adding new sources of income to pay high property tax bills.

While some housing advocates have pushed for a more middle-ground approach to ADUs that would incentivize municipalities to allow these units rather than require them, Martin said mandates are necessary to gain traction.

“If you let every municipality decide that they’re going to be closed off to more housing production [then] before you know it, you have no more housing production,” Martin said. “If we do not make housing more affordable then we simply will be a city and a state that continues to lose population by the tens of thousands, the tax base will continue to erode and the funding for the schools, which makes Long Island and the suburbs so desirable, will diminish. It’s a holistic problem that must be addressed.”

Robert Nelson, president of Nelson Management Group, which owns and operates more than 4,500 apartment units across New York City, said increasing ADUs would help address the lack of affordable housing, but would not make as much of a difference as would increasing density allowances in certain neighborhoods. He also stressed that bringing current ADUs in New York City up to safety standards is a worthy goal that will require major investment and planning effort.

“These code requirements aren’t there just to make life difficult for people who own these houses, they are there for safety,” said Nelson, noting the careful retrofitting that would be necessary in many units. “It is not just flipping a switch.”

State Sen. Pete Harckham from Peekskill and Assembly member Harvey Epstein from Manhattan together proposed a separate, but similar, ADU bill to Hochul’s now-scrapped plan that would legalize the dwellings under state Human Rights Law. That bill was first proposed last summer and then reintroduced in committees of both legislative chambers in January after revisions were made late last year.

“We have to have a lot of tools in our tool belt to deal with the affordable housing crisis,” Epstein said. “We have the opportunity to bring tens of thousands of affordable units online and I think it would be a huge benefit to so many New Yorkers.”

Epstein added that he looks forward to continued dialogue with Hochul and fellow lawmakers to find a solution to allowing ADUs that can earn widespread support.

The Real Estate Board of New York delivered testimony last October before the Assembly standing committees on cities, housing, judiciary and local governments regarding ADUs, stressing support for boosting them, but emphasizing that local governments must play a “strong role” in the process. In the end, however, REBNY came out against the Harckham-Epstein bill because of certain provisions, like one that prohibits owners from raising rents by 3 percent, or 150 percent of the consumer price index (whichever is less), which would result in increasing financial obligations on landlords.

REBNY is in favor of Hochul’s legislation plan for New York City ADUs.

“The executive budget language empowers the New York City Council to legalize ADUs if it so wishes,” said Maya Kurien, REBNY’s vice president of policy and planning. “It is a sensible step enabling local authorities to take concrete action to help address the city’s housing crisis.”

Don Clavin, supervisor for the Town of Hempstead on Long Island, which borders Queens, voiced strong opposition to Hochul’s plan and is against the idea of expanding ADUs in suburban areas due to quality-of-life concerns with traffic and overcrowded schools. He noted that within days of the proposal’s rollout, 12,000 people throughout the Town of Hempstead signed a petition against it. Hempstead is America’s largest township with a population of 759,793, encompassing 22 incorporated villages and 38 unincorporated hamlets.

“People live in the suburbs and pay a significant amount of money, particularly here on Long Island, because they like the control of local zoning to local townships and villages,” Clavin said. “The governor’s attempt by putting this legislation inside her budget was to really take away all the zoning from the localities and change the face of suburbia across New York state.”

Clavin added that while he was happy Hochul pulled the original ADU proposal from her budget, he will remain “vigilant” to make sure similar legislation isn’t approved. He said the governor should now seek feedback from around the state and craft plans that revolve more around workforce housing near train stations rather than mandating ADUs.

Larry Levy, executive dean of the National Center for Suburban Studies at Hofstra University, said ADUs can “take a quick bite” out of an area’s affordable rental housing shortage while also helping some homeowners with defraying costs of owning their property. He stressed though that the best path toward achieving this through an unfamiliar concept like ADUs is by using “carrots of encouragement” that can bring various stakeholders together.

“Hochul realizes she made a strategic political mistake but was smart enough to correct it before it caused her more serious damage,” said Levy, a former political columnist at Newsday. “Now hopefully everyone can get together and figure out a way to allow more rentals without overrunning neighborhoods.”