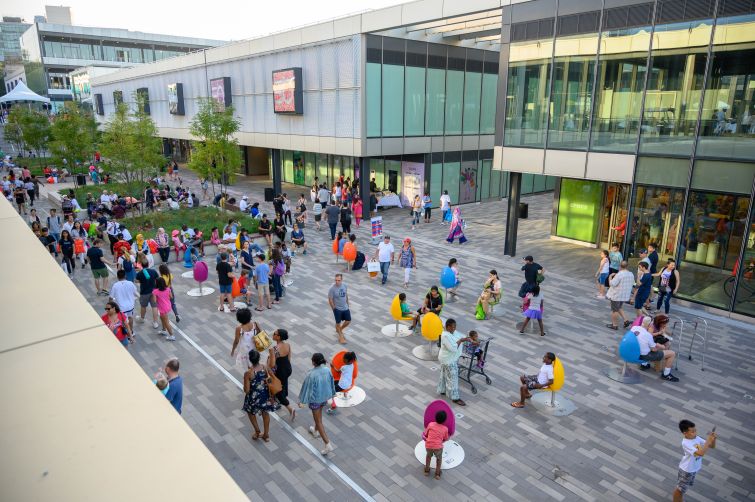 The lenders on New York City’s first outlet mall, Staten Island’s Empire Outlets, filed a foreclosure action on the project to restructure its finances after the project faced construction delays and vacancies.

Sterling National Bank and Goldman Sachs’ Urban Investment Group filed the consensual foreclosure action against mall owner BFC Partners in Richmond County court on Monday, the Staten Island Advance first reported. The decision to foreclose on the property means BFC will no longer own the mall, located at 55 Richmond Terrace adjacent to the St. George Ferry terminal, though the real estate firm will keep control of the property during the one-year-long foreclosure process.

The foreclosure notice alleges that BFC, through an affiliated company, St. George Development, defaulted on several loans totaling about $174 million owed to Goldman Sachs and $38 million owed to Sterling, according to court documents.

“We are committed to the success of Empire Outlets and the North Shore, and this action puts the complex in the best possible position for long-term growth,” Sherry Wang, co-head of Goldman Sachs’ Urban Investment Group, said in a statement. “Empire Outlets has played a vital role in the community during the pandemic, and we hope the project will serve as an economic engine as the city continues its recovery.”

The financial restructuring will not change the day-to-day operations of the mall, according to a spokesperson for Goldman Sachs. Empire Outlets hired a JLL team to manage and lease the property during the restructuring — taking over from Newmark — which will keep tenants operating and save employees’ jobs in the 350,000-square-foot retail complex, BFC Principal Joseph Ferrara said.

“Prior to the pandemic, Empire Outlets was on track for incredible success, but COVID’s mandatory shutdown and the near elimination of commuter and tourist traffic had a direct effect on the center’s bottom line,” Ferrara said in a statement. “Today’s restructuring will protect tenants and preserve the hundreds of existing jobs currently in place at Empire Outlets.”

Empire Outlets started construction in 2015 but the project struggled to get off the ground. The project faced a series of delays that pushed back its opening date three years, from 2016 to 2019 and was hit with a lawsuit in 2019 for failing to pay a Brooklyn-based builder for constructing a temporary office, the Advance reported. It also missed payments in 2020 on an $8.5 million low-interest loan from the New York City Economic Development Corporation — which gave millions in subsidies to the project, THE CITY reported.

The project also came under scrutiny in 2016 after it was awarded nearly $47 million in state subsidies after BFC’s partners donated more than $85,000 to former Gov. Andrew Cuomo, who has been criticized for doling out grants to his biggest donors, Politco reported. BFC later got another $20 million in taxpayer money for the project, which developers said was being used to improve infrastructure around the project.

The pandemic wasn’t a cakewalk either for the struggling retail destination. Due to the pandemic, the outlet mall lost 12 tenants covering about 50,000 square feet, or 14 percent of the leasable area, according to a spokesperson for Goldman Sachs. Before the pandemic began, the mall had leased out or had pending leases for more than 73 percent of its space.

BFC is involved in developments in Staten Island and Brooklyn, including the $151 million, 12-story building at 475 Bay Street, for which BFC is expected to get $98 million from the state, as Commercial Observer reported. The firm broke ground on a 361,361-square-foot mixed-use building at 16-7 Surf Avenue in Coney Island, which will hold 376 affordable housing units, according to BFC.