Increasingly, they don't really have a choice as investors, consumers and regulators emphasize going green 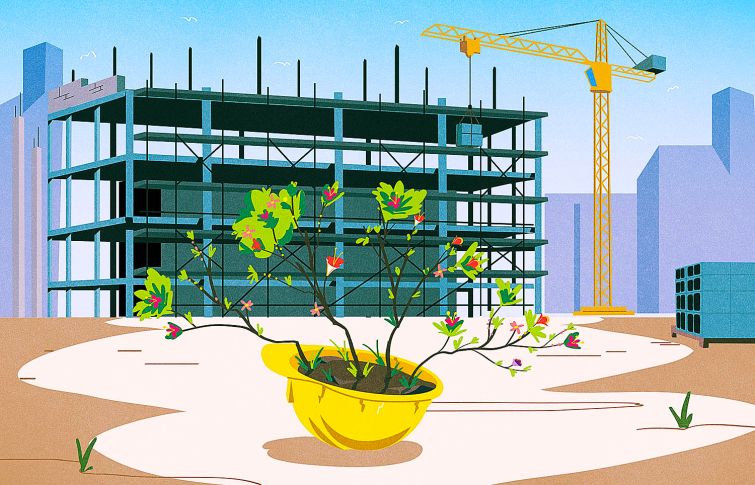 When Heather Arias looks at the altered landscapes of Southern California’s Inland Empire, a flat stretch of semi-arid scrub and grassland that in recent decades has traded citrus trees and horse farms for expansive constellations of big-box warehouses, she sees an industry that won’t slow down. As the chief of the transportation and toxics division of the California Air Resources Board (CARB), the state’s powerful air quality regulator, she is concerned about the direct impact that bumper-to-bumper truck traffic and massive facilities abutting homes and schools has on the Inland Empire’s communities.

“Why would a consumer care that someone in California is getting huge diesel exposure from trucks and warehouses?” said Arias, whose rules impact a region that handles 40 percent of seaborne imports into the U.S. “They don’t think about it.”

Arias certainly does. She would argue that the success of the warehouse industry and its related parts — what’s normally shorthanded as “the supply chain” — suggests that it’s time to devote resources to make a significant change. In recent years, CARB and sibling agencies in the state have unrolled a series of regulations, including an Indirect Source Rule forcing large warehouse owners to track their emissions and ultimately pay for the impacts of pollution, as well as the Advanced Clean Truck and forthcoming Clean Fleets rules that would push the shipping industry towards electrified freight transportation, part of what Arias calls a system-wide effort to green everything from warehouses and trucks to ports and shipping.

Arias simply says the goal is a sustainable and safe industry, cutting the dangerous nitrogen oxide and particulate emissions that overwhelmingly come from the tailpipes of trucks. She has a straightforward message for transportation, logistics and warehouse operations.

“The writing is on the wall; we’re going to zero emissions,” Arias said. “Plan ahead.”

The growing regulatory and social pressures to rein in emissions, exemplified by CARB’s actions in the nation’s busiest port and warehouse market, are just two aspects  of the renewed attention being paid to the fast-evolving supply chain. It’s frankly been hard to ignore. Despite the impacts of the pandemic, warehouse and industrial real estate has multiplied at a nearly improbable clip.

In 2021 alone, more than 532 million square feet of warehouse space was absorbed nationwide, and 568 million square feet is currently under development. Yet vacancy still declined, according to Cushman & Wakefield, hitting 3.7 percent, a new record low. Billions of dollars are flowing to new startups claiming to unsnarl the shipping industry, and even mundane assets such as trucking terminals are receiving new investor interest. Available capacity has declined in 20 of the last 22 months, per Zac Rogers, a Colorado State University assistant professor of supply chain management who tracks the industry.

Logistics operators simply have no place to put the cascading river of stuff flowing to and from warehouses.

Nationwide, “e-commerce represented 14 percent of retail sales last year, and will hit 25 percent in the mid-2020s,” Rogers said. “There’s just no possibility of overbuilding to keep up with the demand. We’ll continue to see huge net absorption, and the hole we’re in will require years of big deliveries to close.”

Rogers and others see clear economic incentives around sustainability steering the industry through its current period of record growth. Ever-faster delivery guarantees and the emergence of the multibillion-dollar quick-grocery business means warehouse expansion has ramped up in dense urban areas — literally, in the case of a new class of multistory facilities.

LogisticsIQ predicts rapid expansion of so-called micro-fulfillment centers, with their numbers growing roughly 50 percent a year. Not only has this “reversed 50 years of logistics sprawl,” said Dave Mullaney, principal at RMI, an energy and sustainability think tank, but the placing of more, smaller facilities near and within cities is highlighting the environmental impact of shipping, and prevents logistics facilities from moving across municipal and state borders to avoid regulations.

He also pointed to a rush to promote electrification: Amid Biden administration investments in EV charging stations, brands and clients seeking to green their operations to meet environmental, social and governance goals and consumer expectations, and the recent exporting of California’s Advanced Clean Truck rule to five more states, including New York and Washington, the industry is recalibrating how it moves goods, and how warehouses can function as charging centers. Leading brands such as Rivian, Tesla and Daimler AG are developing electrified trucks, and the expansion of the Clean Truck rule may accelerate a pledge to hit 100 percent clean truck sales by 2050.

All of these current and projected shifts in regulation mean that developing without sustainability in mind risks creating stranded assets, or massive facilities that require expensive retrofits in the future.

“If you’re deciding the next truck you’re going to buy, you think about what your client wants,” Mullaney said. “The big question for warehouse operators is, if I want to be a preferred supplier for certain customers, what types of charging equipment and investments should I be making now.”

The shift required for warehouse operators and developers, while coming into focus, isn’t completely clear. A JLL survey of more than 700 global logistics leaders taken last summer found that automation and smart technology are seen as more important and immediately relevant to changes in warehouse design, but the desire to cut costs has made energy efficiency a key goal.

In California, for example, the development of the new World Logistics Center in Moreno Valley, set to be the size of six Pentagons, will include a $47 million investment in electric vehicle tech, solar panels, on-site chargers, and even grants for local residents to purchase air filtration systems, due to a settlement and agreement with local environmental groups. This megaproject may showcase what development looks like in the era of the Indirect Source Rule. Iddo Benzeevi, president and CEO of Highland Fairview Properties, which is developing the site, told the local Desert Sun newspaper it would be the most sustainable warehouse in the nation.

Prologis, which boasts nearly 1 billion square feet of space in 19 countries, has been tracking its environmental performance for more than a decade, and already designs around what could be called a futureproofing strategy, making sure new facilities have the right wiring and roof orientation to support vehicle charging and solar panels. The firm’s new Eindhoven DC4 facility in the Netherlands showcases this vision. There, Prologis turned a former waste dump into a fully electrified 430,000-square-foot facility that boasts electric heat pumps, vehicle chargers and battery energy storage.

Ethan Gilbert, a director of the firm’s ESG efforts, said Prologis already has initiatives around water conservation, more high-efficiency building facades and material selection all geared towards sustainability. Gilbert views the firm’s moves as being “prepared for the transition,” capturing clients whose own ESG goals push them towards a more sustainable supply chain. He sees the ability to sell Prologis’ network as a big advantage going forward, as long as it’s focused on modernization, including an expected push towards automation. McKinsey expects the warehouse automation industry to be worth $51 billion annually by 2030.

Gregory Healy, the California-based head of Savills industrial service group in North America, sees the same big push for increasing sustainability in industrial real estate coming mostly from consumers. He points to REI’s distribution center in Goodyear, Ariz., a net-zero facility, showcasing the pressure felt by the warehouse industry. Brands seeking to court eco-conscious consumers will increasingly place a premium on green shipping. Savills is currently collaborating with Sun Company, an Arizona firm, to develop an off-grid, renewable-powered warehouse outside of Tucson.

“This shift is based a lot on social impact and social media,” Healy said. “Consumers want to be aligned with companies engaged in sustainability.”

There’s a significant upfront expense to creating green warehouses, but Healy sees operating costs, especially for electrification, bringing great savings over the long run. As trucking standards and overall shipping and logistics industry regulations push for greener transportation, warehouses will be pushed to become key nodes in an emerging sustainable shipping network that will be increasingly attractive to clients and tenants.

“What does a 2022 warehouse network look like, that isn’t tied to infrastructure put up in the ‘80s or ’90s, which couldn’t handle what we’re doing today anyways?” Rogers said. “This is a chance to rethink, as we expand.”