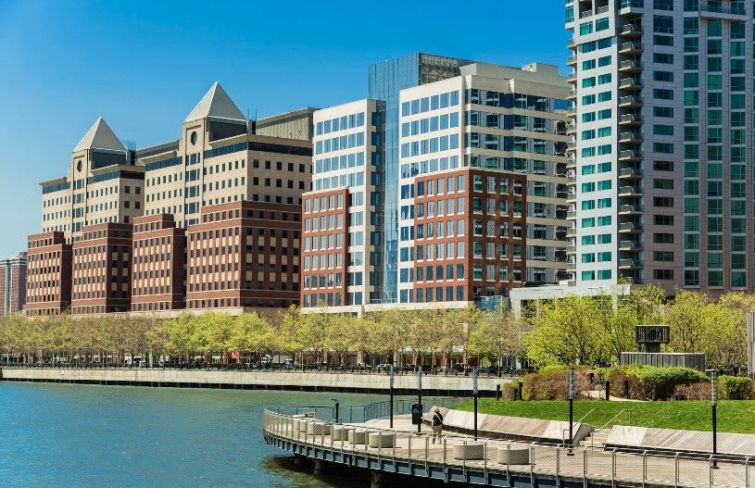 Real estate investment trust (REIT) Veris Residential — formerly Mack-Cali Realty Corporation — was the seller of the 14-story office and retail asset, which sits on the Hudson River and is part of a three-building, 1.5 million-square-foot mega-complex that was originally developed by SJP Properties, starting in 2002. With the closing of its recent purchase, SJP now has full control of the waterfront complex it built, once again.

No purchase price was disclosed, but sources close to the deal said the trophy asset traded for roughly $210 million. The deal closed on Jan. 21.

The transit-friendly Waterfront Corporate Center I sits at 111 River Street in the center of Hoboken’s master-planned waterfront. While the asset’s retail space is fully leased, 100,000 square feet of office space, across two floors, is available for lease and being marketed by Alexander Erdos, a senior vice president at SJP.

“What’s really exciting is that this is the first time since the completion and initial lease-up of Waterfront Corporate Center that a 100,000-square-foot block of space has been available on a direct basis in any of the 1.5 million-square-foot complex’s three buildings,” Steven Pozycki, founder and CEO of SJP Properties, said in an announcement regarding the acquisition. “This represents a tremendous opportunity for a company to establish a meaningful presence in Hoboken, which remains one of the top-performing markets in the region by virtue of its exceptional transit access and vibrant 24/7 lifestyle.”

“When you consider the market’s renewed focus on outdoor space, having direct access to the entire Hoboken waterfront just steps from the lobby is a huge selling point,” Pozycki continued. “Companies are demanding our brand of best-in-class property management — an important offering to their current and prospective workforce as they return to the office — and we know this space is going to lease quickly.”

Indeed, office space in Waterfront Corporate Centers II and III is fully leased to a variety of tenants including EY, Marsh & McLennan and Walmart. An on-site Crunch Fitness is available to tenants, as is a variety of dining options.

Veris Residential acquired Waterfront Corporate Center I in 2016 for $235 million from Equity Commonwealth. In May 2020, Real Estate NJ reported that the REIT was in talks with a potential buyer for the asset, having made the decision to shed its only Hoboken property in addition to its suburban New Jersey assets. The buyer of 111 River Street would assume its $150 million mortgage, Mack-Cali officials said at the time. The status of the debt, and other financing details around SJP and David Werner’s acquisition couldn’t immediately be gleaned.

In September of last year, CO reported that the REIT was under contract to sell 101 Hudson Street in Jersey City, N.J. — one of the tallest buildings in Jersey City — to The Birch Group for $380 million.