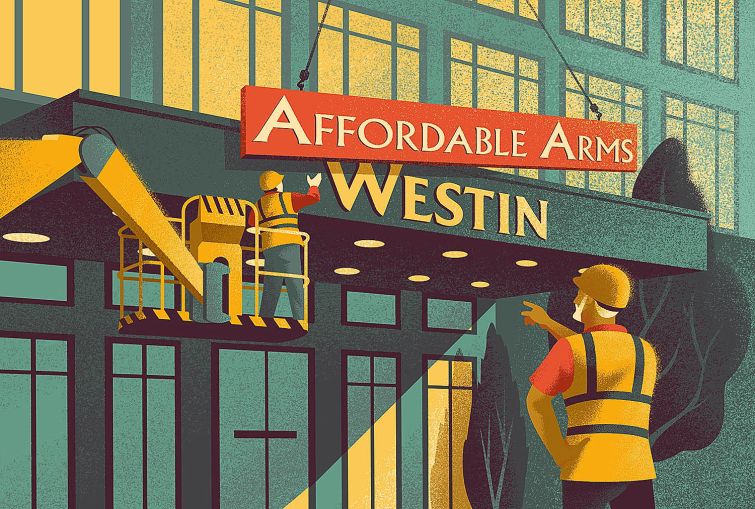 While he was campaigning last year, Mayor Eric Adams promised that he would produce 25,000 units of supportive and affordable housing by converting shuttered hotels. But the question of how, exactly, the city and state can allow and encourage the conversion of offices and hotels to apartments has not been effectively answered yet.

Despite his ambitious promise, even Adams hasn’t furnished concrete details on how to produce 25,000 new apartments from hotels.  And there are multiple layers of complex policy that officials need to unpack, across various city and state agencies. Does the city need a new tax incentive program to encourage these projects? What kind of zoning changes need to be made? How should the state legislature change the multiple dwelling law to encourage commercial conversions? How much money should the city set aside to encourage affordable housing in hotels and office buildings?

The mayor’s office didn’t furnish specifics on Adams’ plan, but did say that “safe, affordable housing is a top priority for this administration, and we will use every tool in our toolbox to create and preserve the housing New Yorkers need.”

Amid these questions, many hoteliers have begun to consider whether converting their buildings to apartments is possible or financially feasible. On the Upper West Side, Emmut Properties in December 2021 purchased the shuttered Excelsior Hotel at 45 West 81st Street for $80 million. Emmut didn’t return a request for comment on the sale, but the company “specializes in converting buildings to pricey residential rentals,” according to the New York Post, which first reported on the transaction.

“We’ve seen in the last three or four months a pickup of that activity,” said Kenneth Colao, who runs contracting firm CNY Group. “There are a host of reasons that some hoteliers are looking at their portfolios and looking to get rid of less desirable properties.”

He added that any owner considering a conversion should look at how much work would be necessary to make the building conform to the city’s residential building codes.

“One of the main things that is important is the amount of reconstruction or teardown,” said Colao, his firm’s founding principal and president, referring to “any reorientation or changes to the core, stairwells and so forth.” He added, “That’s when it gets to be much more expensive and affects the feasibility.”

And, if the hotel is built larger than the current zoning allows, owners have to do some tricky zoning work and re-massing of the building in order to make it work as a conversion.

“A lot of older properties may be located in zones where the property is overbuilt, where any conversion may trigger that deeper analysis of the zoning,” Colao said. Developers can “take that [building] and turn it into an L. Demolish a quadrant of that building and either take that unused [floor area ratio] and put it on top, or use it to fill out the lower floors. You may have your core at the intersection of the L and your rooms on both sides.”

Another typical playbook for hotel-to-residential conversions involves combining every two hotel rooms into one apartment. “One set of bathroom risers can be used for a kitchen and the other set can be used as the bathroom,” Colao explained. “If a property is 30 or 40 years old, you’d really want to replace all the MEP risers in the building and start fresh.”

However, he noted that hotel conversions to affordable housing are “not feasible” without either government subsidies or a property tax break. The city could also incentivize conversions by offering hotel owners zoning bonuses in exchange for adding apartments, he said. And on a more basic level, the city could streamline the lengthy approval process with the Department of Buildings for these kinds of projects.

“Things are just so bogged down in terms of the uncertainty involved in the time it takes to construct and develop a project,” Colao said. “It dissuades capital from going into certain areas.”

New York Gov. Kathy Hochul seems to be thinking along the same lines. A new draft of the 2023 state executive budget allows any hotel in the five boroughs to be converted to apartments, if they are willing to be subject to rent stabilization. The owner doesn’t have to get a new certificate of occupancy to convert the hotel, but it must enter into a regulatory agreement with the state housing agency by December 2027. The hotel must also be located in a zoning district that allows residential uses, or be within 800 feet of a residential district. Residential conversions in industrial business zones would remain forbidden.

The new budget would also allow office-to-residential conversions in Manhattan south of 60th Street in commercial buildings constructed in 1980 or later. Those apartments would also be subject to rent stabilization and a regulatory agreement with the state Department of Housing and Community Renewal. Finally, the document includes language lifting the state floor area ratio cap — which had previously capped new residential buildings (and most residential conversions) at 12 times the size of the lot on which they sit.

Gary Tarnoff, a land use attorney at Kramer Levin, pointed out that the state multiple dwelling law already allows commercial buildings to be converted to residential uses under certain conditions. However, those rules only apply to buildings built before December 1961 in Manhattan south of 60th Street, and to properties built before January 1977 south of Murray Street/Brooklyn Bridge. The current rules also allow conversions in some parts of Brooklyn and Queens.

Still, Tarnoff felt that Hochul’s proposal was “much broader than what was enacted last time” in terms of changing the state housing law. The new rules would allow conversions of offices and hotels that were built in the last few decades but don’t meet the light and air requirements for residential buildings.

Of course, developers have been converting hotels and office buildings to apartments in New York City for decades. But that process has generally been slow, and piecemeal.

Basha Gerhards, the senior vice president for planning at the Real Estate Board of New York, explained that the city’s most notable wave of office-to-residential conversions had happened in the Financial District, in the wake of 9/11.

Although the state tax break that enabled those conversions, known as 421-g, was created in 1994, the conversions didn’t really materialize until the early 2000s, Gerhards said. A confluence of factors helped encourage more new apartments in the area, including a rezoning in the late 1990s, city investment in public space, and federal tax dollars flowing in for 9/11 relief.

“You have the city focusing on the creation of Class A office space, and you have a city program and the state [421-g] program, and the changes to the state multiple dwelling law,” Gerhards said.

She said that the governor’s proposals help speed up the process by “putting the city in full control of its zoning. The governor is really framing this as changes to the multiple dwelling law so the city can control its own zoning destiny.”

First, the city needs to start by studying how many commercial buildings should be converted, and to what kinds of uses.

“We need to first define how much space can and should be converted,” Gerhards said. “It may not make sense for some buildings to be affordable housing. Maybe they should be health care facilities. Let’s do the work and figure out what those details need to be. There are legitimate concerns about over-correction in the office market. There is value to class B and C office space. There are concerns about the affordability mix and the capital dollars that are available.”

Then the state and the city will have to figure out what kind of financing mechanism or tax break will help incentivize these conversions. While the state could expand the use of 421-g, Gerhards said that 421-g had too many issues for it to work today.

“There were legitimate complaints about reporting rent stabilization status with 421-g, and it didn’t have an affordable component,” she noted. “The right type of tool can be designed, but I think it’s important not to create something so narrow that it can’t be used.”

She concluded that while “there’s a whole list of changes you could make to the city zoning resolution” to enable more conversions, “the two most important pieces are the state and city coordinating on this policy and having the state put in the changes at the multiple dwelling law level to allow the city to make these more fine-grained decisions.”