CREFC 2022: Derek Jeter Hits Keynote Out of the Park 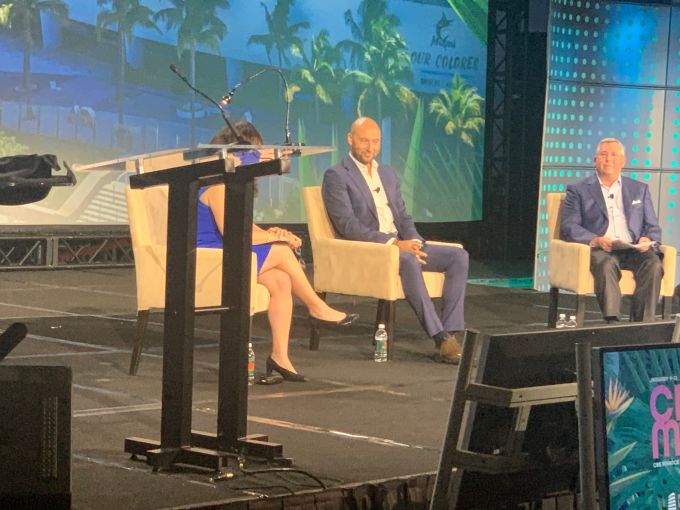 The newly installed National Baseball Hall of Fame inductee spoke to a packed and enthusiastic room inside a Loews Hotel Miami Beach ballroom, which was filled with many Yankees fans who followed his storied career in the Bronx. Jeter became a part-owner and CEO of the Miami Marlins in 2017 three years after his retirement from the Yankees following a 20-year career in which he captured five World Series rings, and joined Major League Baseball’s exclusive 3,000-hit club.

“Sports and business are the exact same as a team,” said Jeter, who also founded a multimedia company called The Players’ Tribune after his playing career. “You have to have the right people in place, you have to trust your teammates and you have to give credit to people that deserve credit.”

The conversation with Jeter was moderated by Trepp CEO Annmarie DiCola and Bob Foley, CFO at TPG RE Finance Trust.

Jeter said the foundation for his success as an athlete and entrepreneur was laid when he was a child. His parents presented a contract for him to sign at the beginning of each school year, setting up expectations for him to perform well in the classroom, keep curfews and give back to the community if he wanted to participate in athletics.

“My parents are big on accountability and responsibility and not making excuses,” said Jeter, who grew up as a Yankees fan in Michigan with fellow Hall of Famer Dave Winfield as his favorite player in the 1980s. “They were preparing me for life.”

Looking ahead, Jeter said his major goal for the Marlins is to boost attendance, which has been a struggle for the organization since it formed as an expansion franchise in 1993. The Marlins debuted a new 37,442-seat ballpark with a retractable roof 10 years ago at the former Orange Bowl stadium site in Miami’s Little Havana section. The ballpark was renamed LoanDepot Park last year following a naming rights deal.

“If you look at the demographics in Miami, whether it is Cubans, Columbians, Dominicans, Venezuelans, baseball is the number one sport in those countries,” Jeter said. “It’s our job to put a team on the field that is competitive.”