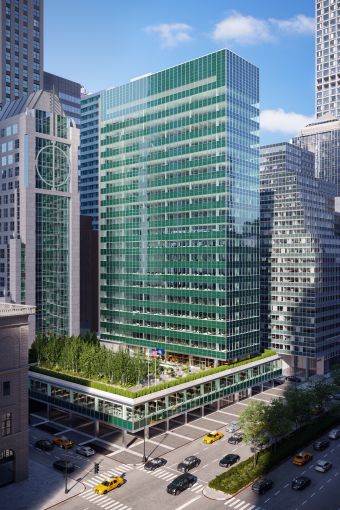 SOM, the original architects of Lever House, are returning to renovate the 1952 building and restore some of its historic features. Rendering: SOM 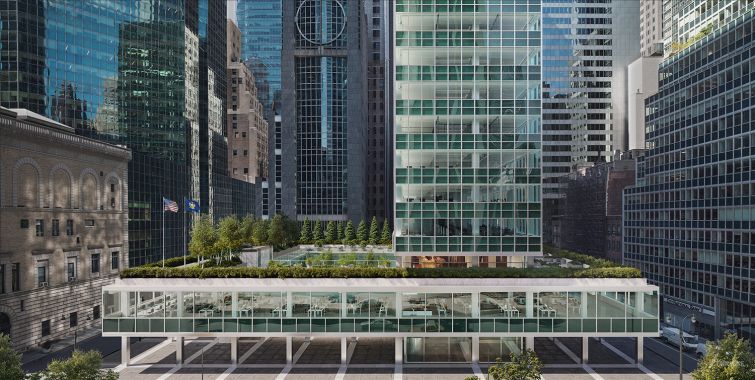 The outdoor terrace at Lever House is also getting new landscaping and seating, along with an indoor amenity space for tenants. Rendering: SOM
Previous Next

Lever House, an icon of midcentury architecture, is getting $100 million worth of renovations—courtesy of owners Brookfield Properties and WatermanClark.

Constructed in 1952, the landmarked, 21-story office building at 390 Park Avenue was built for Lever Brothers soap company, which was relocating its headquarters from Boston. Gordon Bunshaft and Natalie de Blois of Skidmore, Owings & Merrill were the original designers, and Brookfield is bringing SOM back to renovate the 307-foot-tall property. It was the second glass-curtain-walled building developed in New York City, after the United Nations headquarters building.

The 260,000-square-foot structure has a unique footprint, with a three-story podium topped by a large outdoor terrace, and the tower portion set back from the street and positioned at a right angle to Park Avenue.

“It was such a radical intervention on Park Avenue — the massing, floating the building perpendicular to Park Avenue, the glass facade next to all the masonry facades,” said Chris Cooper, the managing partner of SOM’s New York office. “Even today it’s still radical. Especially in this moment, where there’s a renaissance on Park Avenue with the rezoning and people building bigger. So it makes this building all the more unique and such a jewel on the avenue.”

He characterized the renovation as a continuation of the restoration SOM started 20 years ago, when it replaced the translucent, green-glass facade. The revamp involves new mechanical systems, including destination dispatch elevators and a dedicated outside air system, an overhaul of the landmarked outdoor plaza, an updated lobby, and new, higher ceilings on the tenant floors.

“Every surface has been evaluated whether it can be restored or replaced,” explained Cooper. “And so the ceiling is being replaced with a new, more modern system, and the paving is being replaced, but for the columns and all of the storefront detailing, we are keeping the original stainless  and refinishing it.”

A new service door is even being punched through an existing, black marble wall in the courtyard to allow waiters from the building’s restaurant, Casa Lever, to walk directly into the plaza to serve outdoor diners, rather than around the building and through the lobby.

“There are tables for the restaurant on the plaza but it’s not so easy to bring food out,” said Cooper. “They had built a contraption in the lobby to hide the passage of the waiters, and we’re able to clean all that up.”

The original terrazzo flooring in the lobby is also being restored, along with a yellow Murano glass wall that has been altered over the years. Architecture firm Marmol Radziner, which also worked on Brookfield’s One Manhattan West, is handling the interior design of the lobby and a new tenant-only club on the third floor. The interior designers decided to bring more seating and furniture into the lobby, in an effort to give it a more residential feel.

On the third floor, the new amenity space will include conference rooms, a lounge area, and a cafe that serves food, drinks and coffee with a grab-and-go option. It will connect to the 15,000-square-foot outdoor terrace, which is getting new landscaping—handled by Reed Hilderbrand—along with chairs, couches and tables.

Down in the basement, Brookfield and WatermanClark are adding workout rooms and bike storage facilities with showers.

As for the tenant floors, former drop ceilings are being raised because the building’s aging heating and cooling system is being replaced with the dedicated outside air system, which brings in 100 percent fresh air on each floor.

“We are taking out these massive convectors so you can walk right up to the window,” explained Ric Clark, a principal at WatermanClark and Brookfield’s former real estate chief. He touted that the DOAS system brings in “50 percent more fresh air than most modern buildings in New York City today.”

As part of the lobby renovation, Clark said he wants to install technology that will automatically identify whether a person works in the building, and that system would call the elevator and take that person to their specific floor.

“We intend to introduce technology so the minute you walk in the door, the building will know whether you’re a tenant or not,” said Clark. “And if you’re not, the building will be able to identify you and a receptionist will walk up to you and check you in so you can go upstairs.”

Construction began at the end of last year and is expected to wrap in the first quarter of 2023.

And for the first time in decades, Lever House is vacant, meaning that one tenant could take over the whole thing. Clark, however, expects its 11,000-square-foot floor plates to appeal to smaller private equity firms and family offices.

He wouldn’t disclose asking rents, but said, “given the investment we’re making in this building, we expect top market rents.”