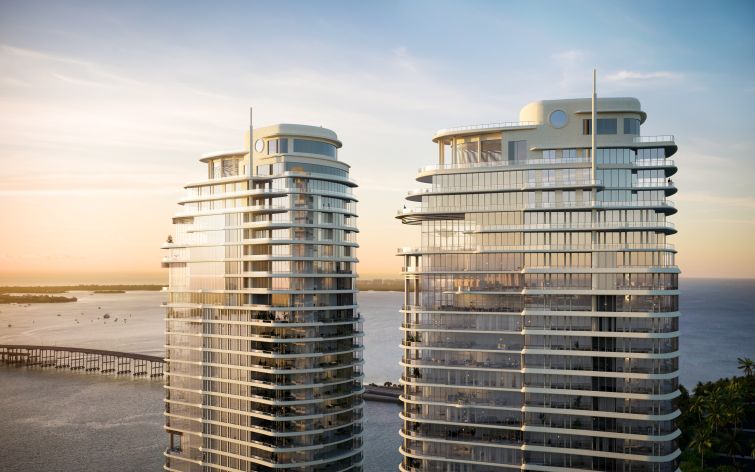 A rendering of the St. Regis Residences Miami. Rendering: The Related Group and Integra Investments

From the 99 percent to the 1 percent, a St. Regis condominium is replacing an affordable housing building in Miami.

“Much like the first St. Regis hotel solidified New York City as the global hub for culture, commerce and society 100 years ago, our plans for this property cement Brickell as an international metropolis for a new era of connoisseurs,” Jon Paul Pérez, president of Related, said in a statement.

The two-tower waterfront project will include 354 apartments and 55,000 square feet of amenities, including a butler service. Robert A.M Stern Architects, known for their work on New York skyscrapers, designed the towers and Rockwell Group will handle interiors.

Located at 1809 Brickell Avenue, the development sits less than a mile from the Rickenbacker Causeway. The 137,702-square-foot lot currently holds a 272-unit affordable housing apartment building meant for seniors called George Humphreys Towers. Integra bought the property, built in 1966, for $14 million in 2014, according to property records.

The developers are expecting a windfall, anticipating a $2 billion sellout with prices starting at $2 million per unit. If achieved, the development would be Related’s most successful. To date, the Residences by Armani/Casa condo tower in Sunny Isles Beach holds the crown, selling out at $1 billion.

“We are sparing no expense to make this the definitive Miami address,” Nelson Stabile, an Integra principal, said in a statement.

The developers have not secured financing for the construction, which will commence next year, per a spokesperson for the developer. Sales, which brokerage ONE Sotheby’s International will handle, are slated to begin in early 2022.

Such projects come as the cost of residential real estate in Miami skyrockets.

Northerners and high-profile businesses have flocked to the area since the start of the pandemic, driving the average price of condos in Miami-Dade County to $605,005 in November, up from $447,299 a year prior, according to data compiled by ONE Sotheby’s International. Miami now ranks as one of the least affordable cities in the country for homebuying, joining New York and San Francisco.

Following a fight with residents of George Humphreys Towers, Integra is in the final stages of developing a 271-unit residential community in Allapattah, where all current renters have the opportunity to relocate, the developer’s spokesperson said.