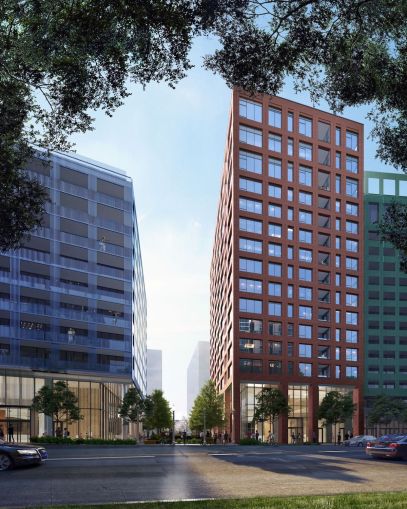 Partners Group and ZOM Living have secured $150 million in construction finance and a $26 million bridge loan from CB&S Bank for Hazel & Azure at National Landing, a two-tower residential project in Arlington, Va., Commercial Observer has learned.

The 14-story towers will include 492 units between them, as well as 6,800 square feet of ground-floor retail space, according to the developers.

The location is also walkable to most locations in National Landing, and is close to Crystal City and the future Potomac Yard metro stations.

The community will offer studios as well as one-, two- and three-bedroom units, and townhomes, all ranging from 519 to 1,784 square feet. Amenities include an e-lounge with computers and concierge service in the lobby, a rooftop pool and outdoor deck, a fitness center and wellness spa, plus co-working spaces for those residents seeking to work from home.

“The project is designed with two towers with a shared outdoor plaza and below-grade garage. Each tower will offer its own amenities giving residents more choice in the market,” Cretal said.

The boutique building will also have a café and lounge open to the residents and the public.

Construction is scheduled to start in the first quarter of2022 with competition expected in late 2024.

Requests for comment from CB&S Bank were not immediately returned.