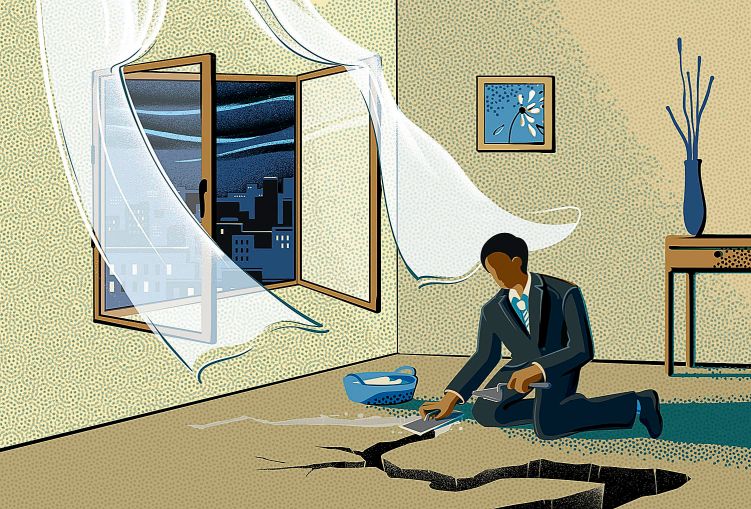 While office occupancy has improved in late 2021, at 38.6 percent as of November and in the 10 top U.S. metro areas, according to managed security company Kastle Systems, desire for remote or hybrid work among many employees is causing a number of companies to rethink their space needs. The office sector comprises 30 percent of the underlying collateral within CMBS, putting upcoming lease rolls and loans under heavy investor scrutiny, according to Jen Ripper, an investment specialist at Penn Mutual Asset Management.

“There’s a lot of question marks surrounding office space and, for me personally, I’m a little bit cautious on it given all of the unknowns,” Ripper said. “It will be a case of the haves and have-nots.”

Ripper said that while fall 2021 saw a  “steady” stream of employees returning to the workplace despite a flare-up of the delta variant, uncertainties with the new omicron strain might delay a hoped-for, large-scale office ramp-up in early 2022. She noted that investors should be especially wary of older properties and suburban office assets that may struggle to compete with newer Class A trophy buildings in major cities.

It’s those buildings that are drawing the most tenant demand now, in part because the pandemic caused a jump in available sublease space and a decline in rents.

“Those lower-tiered office properties in less-demand locations will struggle to refinance,” Ripper said. “Within conduit transactions, if you have a diversified portfolio and you’re up the capital stack, it should be somewhat less of a concern, but it is something we will be taking a look at as those loans come due.”

The COVID-19 pandemic has thus far not caused any material distress to CMBS office debt. Only 2.89 percent is in either delinquency or special servicing compared to 1.9 percent in 2019, according to data from commercial real estate data firm CRED iQ. Markets with the highest delinquency/special servicing rates including  Hartford, Conn. (22.3 percent), St. Louis (19.2 percent), Houston (13.9 percent) and Indianapolis (13.62 percent).

Marc McDevitt, senior managing director at CRED iQ, noted that delinquency and special servicing rates historically don’t provide guidance for future levels of distress. Lease rollover risk and market vacancy trends are instead better indicators of credit risks. McDevitt said many of the increased vacancies are tied to flight to quality with firms seeking office space with “higher wellness attributes” along with downsizing as companies reevaluate spacing needs amid the evolution of remote working habits.

“The office environment is a concern for CMBS investors in the long term as they monitor the rise in market vacancy rates, especially in [central business district] submarkets,” McDevitt said. “However, corresponding increases in delinquency will likely be delayed due to longer lease terms relative to retail. In the near-to-medium term, investors are likely concerned about pockets of lease rollover for certain assets in specific markets.”

Office loans have performed better than expected during the pandemic. That’s partly because of lenders showing more tolerance in working with borrowers to enter modifications or forbearance, according to Michael J. Hurley Jr., managing partner at Cassin & Cassin and co-chair of the law firm’s CMBS, loan sales, acquisitions and balance sheet lending practices.

Hurley said Class A buildings are well-positioned for future CMBS originations because they have amenities that attract strong tenants, but stressed that older assets may be forced to go the bridge lending route in 2022 and also reposition their properties as either life sciences or housing. He noted that about a third of the approximately $20 billion in CMBS debt maturing in 2022 is tied to office loans.

“There is higher risk there for the kind of less desirable office buildings, but they also serve the need for smaller businesses and companies that can’t afford the $100 a square foot, which is why I think you’ll see a repositioning and/or a conversion of some of those assets,” Hurley said. “There’s so much dry powder and money on the sidelines from private equity groups and other funds that have been established, I can see a repositioning of office buildings where a strong sponsor with capital borrows 60 percent and on flexible terms with a bridge lender that will ultimately probably throw the loan into a [collateralized loan obligation], but reposition it with short-term financing; and then three, five years down the road it’s taken out by a CMBS lender.”

Hurley said he expects CMBS office volume in 2022 to be more concentrated in single-asset, single-borrower securitizations with trophy assets that have strong sponsorships. He estimates between 10 and 20 percent of CMBS office debt will come from conduit deals; and that this share will gradually increase throughout the year.

All of this hinges on that demand for space. Right now, with omicron and other variables, that demand looks a bit delayed at best.

Demand for office space from prospective tenants declined 30 percent in the nation’s seven major office markets in October from a pandemic peak in August, according to data from commercial leasing platform VTS. That demand had spiked 444 percent between June 2020, at the height of the pandemic, and August 2021, before an 18 percent decline in September and an 11 percent drop in October.

Brad Tisdahl, CEO of Tenant Risk Assessment, said office CMBS investors should be keeping close tabs on office vacancy rates, which in some markets and asset classes can be measured in the 25- to 30-percent range. He added that falling rents add to the pressures of some of these office assets.

“From the CMBS perspective I’d be looking at debt yield coverage and the asset’s ability to service its debt and how compressed that is,” said Tisdahl, who advises institutional real estate owners and operators on the credit risk of tenants. “If I were looking at CMBS I’d be thinking about whether a termination is coming or what are the rents in that market looking like today; and then I also have to think about the inflationary environment that we appear to be walking into and that could color my thought process.”

Another potential headwind facing the office CMBS market? The Federal Reserve signaling it may raise interest rates in 2022 to combat inflation fears. Tisdahl noted that higher interest rates could further hinder CMBS office issuance since investors will have less incentive to hunt for high-yield opportunities.

Then there are the number of CMBS conduit refinancing transactions in the pipeline for 2022 — due to deals issued 10 years ago, at far higher interest rates, following the last financial crisis. Tisdahl said lenders will likely scrutinize more any deals that mean taking on office debt next year.

“Lenders are going to look at this with a different perspective than they would have two years ago, or three years ago,” he said. “They are probably going to model cash flows that are lower than they were before the pandemic, and that’s going to hurt an owner who’s trying to refinance.”