NYCHA Residents to See $3.1B in Housing Upgrades Through Private Partnerships 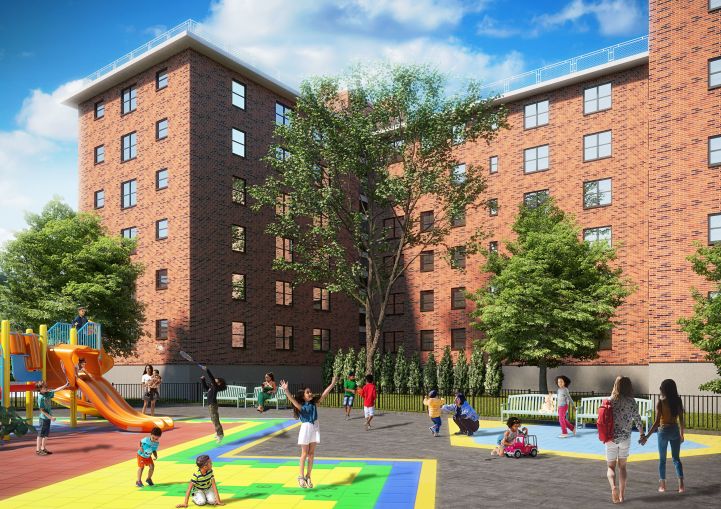 Renderings of what Boulevard Houses will look like in the future. Credit: Phiro

Up to $3.1 billion in capital financing for improvements will be coming to New York City Housing Authority complexes across the city from private sector joint ventures, the agency announced.

The largest of the recent deals, financed through NYCHA’s Permanent Affordability Commitment Together (PACT) program, will bring $600 million to renovate the more than 1,600-unit Boulevard Houses, Fiorentino Plaza and Belmont-Sutter complexes in East New York, Brooklyn through Boulevard Together Developer, the joint venture between The Hudson Companies, Property Resources Corporation and Duvernay + Brooks.

“This is about the residents first and foremost,” Aaron Koffman, managing principal at Hudson, said in a statement. “This transformational project will also provide local workforce and educational opportunities while maintaining resident protections and permanent affordability for generations to come.”

The joint venture will also manage the properties as Boulevard Together Management, which will run the day-to-day operations of these complexes. Virtual town halls and newsletters to tenants have been sources of general feedback, questions and concerns for the developers in the ongoing process.

“The PACT program continues to be one of the authority’s best tools for comprehensively improving NYCHA campuses with significant infrastructure repair needs,” NYCHA chair and CEO Greg Russ said in a statement. “The collection of experienced partners that have been assembled to provide large-scale rehabilitation work, robust property management and much-needed social services for these sites will enable NYCHA to maintain our commitment to creating stronger developments for thousands of additional public housing families.”

Under PACT, NYCHA’s developments partnership with private and non-profit development partners will be included in the federal Rental Assistance Demonstration (RAD) to convert units to the Project-Based Section 8 program while the authority continues to own the land and buildings, while also ensuring homes remain permanently affordable and residents have the same basic rights as they possess in the public housing program.

Construction loan financing for the three complexes in East New York was provided by HDC and JPMorgan Chase, according to a spokesperson for Boulevard Together. Chase Community Development Banking will invest up to $140 million in federal and state historic tax credit equity.

NYCHA and the HDC also announced on Wednesday a total of 5,226 apartments across six NYCHA campuses in Brooklyn would receive similar treatment through similar partnerships.

The deals between the city administration and these private entities come as Mayor Bill de Blasio has less than two days left in office, ending a period fraught with controversy surrounding conditions in NYCHA complexes across the city.

With lead paint and aging infrastructure, as well as deplorable living conditions in units themselves, causing a stir throughout de Blasio’s second term in office, a decision to bring in a federal monitor was made in May 2018 from HUD.

The federal monitor, Bart Schwartz, eventually discovered that lead paint and poor water quality were worse than initially reported by the de Blasio administration. As of two weeks ago, NYCHA remained at the top of​​ the public advocate’s Worst Landlord Watch List for the fourth year in a row.