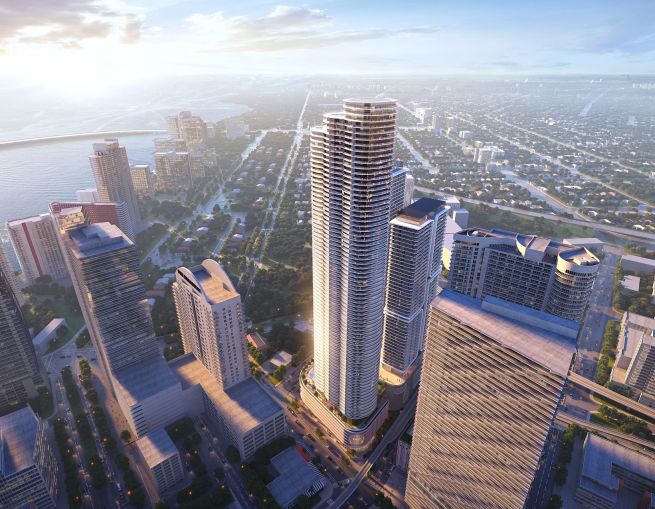 Mast Capital has closed on the purchase of a prime development site in Brickell, where it plans to build three new residential towers, for $103 million, the company announced on Monday.

Located just behind the SLS Brickell in Miami’s financial center, the 2.8-acre site spans an entire block between S Miami Avenue and SW 1st Street, with an address at 1420 S Miami Avenue.

Mast Capital plans to build two rental towers and one condominium at the long-vacant site, spanning a total of 2.6 million square feet, according to plans filed with the City of Miami’s Planning Department in July. That includes an 80-story condo with 400 units, two rental towers reaching 50 and 60 stories with a total of 850 apartments, plus parking and street-front retail. The as-of-right plans are currently under review.

Private equity firm Rockpoint is an equity partner on the rental portion of the development, per Mast Capital.

An affiliate of the China Communications Construction Company previously purchased the land for $74.7 million in 2014, according to property records.

Despite changing hands a few times over the past two decades, the site has been vacant since the mid-2000s. Plans for a two-tower mixed-use project were underway in 2007, but were paused because of the recession. Later, the China-based group also planned a two-tower project which fell through.

“We worked hard to identify attractive investment opportunities and as a result have had a very active 18 months,” said Mast Capital Founder and CEO Camilo Miguel Jr. “The closing of the Brickell site is the culmination of a very exciting 2021 for Mast Capital.”

The deal was completed in an off-market transaction.

Chinese investment in United States commercial real estate has waned in the last several years, after a burst of activity in the post-Great Recession years and then a sharp dropoff after the Chinese government began cracking down on foreign investment in 2017. Additionally, many Chinese companies began backing out of marquee projects, and selling their holdings as the regulation intensified.