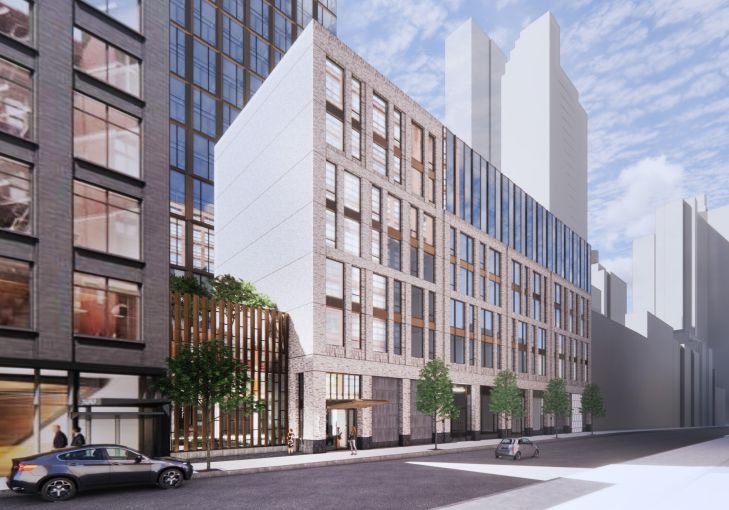 Construction is now underway, with an anticipated completion date of mid-2024.

“The closing of this loan is an important step towards realizing the vision for 312 West 43rd, where we will create a top-quality residential and retail destination in a dynamic live, work, play corridor of the city,” Colleen Wenke, president and chief operating officer of Taconic, said in prepared remarks.

“I’d like to say we own a crystal ball,” Wenke said. “But the truth is that we’re in the business of trying to forecast out what will be important in the future. The wellness aspect of the building, which includes an abundance of green space, was all planned prior to the pandemic hitting. What we included more recently was the filtered air aspect.”

Taconic and National entered into a 99-year ground lease with 1199SIEU Healthcare Workers Union to develop the block-through site into a mixed-use building back in 2018, filing permits for the planned development in 2020. The site sits in Hell’s Kitchen’s Special Clinton District, established to both preserve and strengthen the residential character of the surrounding community.

At the time the ground lease was signed, Taconic and National officials worked with 1199SEIU to solidify a structure that “vested the long-term ownership of the property with future generations of 1199SEIU members,” Globe St. reported.

Speaking of the construction financing, Jeffrey Kanne, president of National Real Estate Advisors, said: “This financial commitment allows National to continue delivering on our mission to create value, provide jobs, and strengthen economic vitality in the places where we invest. We look forward to this exciting next phase of this high-quality mixed-use development project.”

“We’re proud to participate in another New York City project that supports unions,” Edward Smith, president and CEO of ULLICO, said. “Projects like this one help fuel the local economy by putting union members and union contractors to work.”

The appetite for the lending opportunity was strong, said Chris Losco, vice president of acquisitions: “It became increasingly interesting as the process went on. We launched back in March —before the resurgence of residential properties in New York City —and caught a few big fish, but then multiple lenders stepped up as the residential market started catching fire in April and May. This deal speaks to the city’s resilience, seeing as there was a fear at one point that people wouldn’t move back to the city.”

While ULLICO beat out other lenders on proceeds and rate, its ability to be a true partner in the deal who understands the many nuances of the construction process also gave it a leg-up on the competition, Losco said.

“Taconic Partners is one of the most active real estate developers in the city and we’re proud to have closed our first transaction on their behalf,” Scott Singer said. “The closing of this ground-up construction financing is an exciting milestone in New York City’s ongoing and accelerating recovery as well as in Taconic Partners’ plans for building out their vision for 312 West 43rd Street.”

In addition to sitting a stone’s throw from Times Square, the building’s prime location allows easy access to Hell’s Kitchen, Hudson Yards and the Theater District, and only expands Taconic’s growing footprint in the neighborhood.

Nine blocks north of 312 West 43rd sits Taconic’s 525 West 52nd Street, a 445,000 square-foot luxury rental building also designed by Handel Architects. After acquiring the site in 2012, Taconic successfully brought the project through the City’s Uniform Land Use Review Procedure rezoning process, getting the go-ahead to develop a residential building. Today, the building is one of the most sought-after residential addresses in Hell’s Kitchen.

“There will likely be some competition between the two [properties],” Wenke said of their comparison. “They’re both beautiful buildings in a location that appeals to a broad spectrum of occupants.”

As we round out the year, Taconic still has more deals to close in the pipeline, and is only doubling down on its commitment to New York City.

“We never bet against New York, and we see the demand to work, live and invest here,” Wenke said. “ We’re New Yorkers, we believe in the city and the product we create and we’re excited to be part of the future here.”