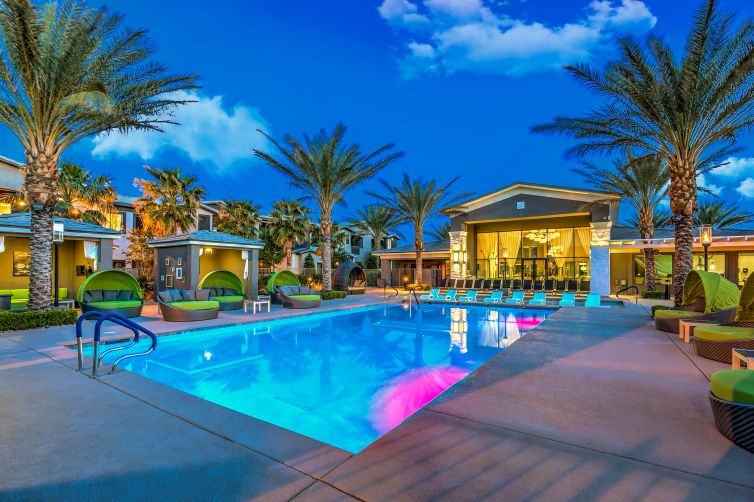 Sumitomo Mitsui Banking Corporation (SMBC) has provided $91.4 million in debt to Starlight U.S. Residential Fund to acquire a luxury apartment complex in Las Vegas, according to information from Newmark, which arranged the debt.

“We were thrilled at the opportunity to provide the acquisition financing on this Core Plus Class A multifamily complex in Las Vegas,” said Alex Cabria, Director of Originations within the Real Estate Finance Group at SMBC. “The Vegas multifamily sector has demonstrated excellent market fundamentals in recent years. Coupled with Starlight’s institutional experience in the market, we were able to offer best in market terms and pricing for this financing.”

Newmark’s Curt Allsop, Angela Bates, Doug Schuster and Vittal Ram advised The Bascom Group in the sale, while Matthew Williams and James Maynard — from Newmark’s debt and structured finance group — brokered the acquisition financing on behalf of Starlight. This marks the second multifamily acquisition from Starlight in the Las Vegas area.

Starlight U.S. Residential Fund is a Canadian publicly listed fund vehicle that was formed in September to capitalize on residential acquisition opportunities in multifamily and the single-family rental (SFR) space in Sun Belt states, as well as California, Colorado, Idaho, Nevada, Oregon, Utah and Washington. The fund currently has interests in more than 1,100 Class A, stabilized multifamily units in Tampa, Las Vegas and Raleigh, as well as 28 SFR homes in Atlanta.

“The purchase of Lyric Apartments offered a rare opportunity to acquire and add value to a well-built, luxury multifamily property in one of the most affluent residential areas in the Las Vegas [metro area],” Allsop said. Recent research from Newmark shows that Las Vegas is one of the hottest markets in the U.S. for rent growth, annually; it sits at almost 31 percent, compared to the 13.4 percent average across the broader U.S.

“The multifamily sector in Las Vegas has experienced price appreciation of approximately 100 percent over the past few years, and properties like these will almost always be in demand by value-add investors looking to plant their flag in this market,” Allsop added.

Lyric Apartments was originally built by Nevada West Real Estate in 2014, and Newmark actually represented the company when it sold the property to The Bascom Group a couple years later.

The asset includes one-, two- and three-bedroom units that average 1,084 square feet. It features two swimming pools with cabanas, a fitness center, a karaoke lounge and two recreational areas, including a splash pad and a playground.

Monthly rents at the property range from more than $1,400 for the smallest one-bedroom floorplan — 644 square feet — to almost $2,000 for roughly 1,400-square-foot three-bedroom units, according to listings from the property’s website.

An official at Starlight did not respond to an inquiry prior to publication. The Bascom Group could not be reached.

This story was updated after publication to include commentary from a lending official at SMBC.