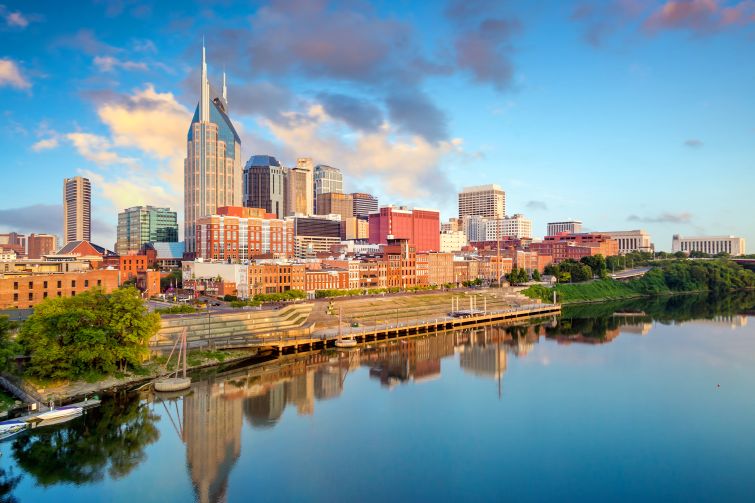 A view of downtown Nashville, Tenn. and the Cumberland River. Nashville's ever-expanding investment prospects have many lenders homed in on its real estate opportunities. Photo: Getty Images

Secondary markets have become the center of attention for many commercial property lenders and investors in the aftermath of the pandemic.

Economic dynamics, migration patterns and investment return profiles have led many to focus more time and energy on burgeoning markets like Austin, Denver, Nashville and Raleigh-Durham, where COVID-19 has —to use a tired verb — accelerated growth.

“One of the effects of COVID is the realization that came to light of where people really want to live,” Kwasi Benneh, the head of North America commercial real estate lending at Morgan Stanley, said. “It has always been a foregone conclusion that 24-hour cities only had some nascent competition. That notion has been challenged. Secondary markets such as Denver, Austin, Nashville, etc., are now real alternatives for corporate decision makers looking to attract talent and that engender an attractive commercial real estate investment or financing theme.”

KKR Managing Director Julia Butler went so far as to say Austin, driven by strong “demographics, diversity of jobs, politics, cost of living, culture and city planning” would “before [we] know it … no longer be secondary.” With Tesla and Samsung recently making big commitments in Austin, Butler may be on to something.

While many lenders who participated in this year’s iteration of Commercial Observer’s Lenders Feature praised Austin, Vincent Toye, the head of agency and off-balance sheet lending at JPMorgan Chase, said “not far behind [Austin] is Nashville.”

A good portion of debt financiers, from money center banks to private lenders, in fact, said they’ve been struck by Nashville — a.k.a. Music City.

Nashville’s growth has been well-documented, even before COVID-19. In the last 18 months or so, it’s become a centerpiece of lender and investor discourse about rushing into high-growth secondary markets.

The city is littered with construction cranes — this reporter, a Tennessee native, can attest — as new multifamily properties, office assets and hotels continue to sprout up all over its downtown and surrounding areas.

The city has just about everything investors want to see when dabbling in secondaries — population growth, top universities, renowned medical centers, ample sports and entertainment attractions and the presence of major companies that call the city home. These, of course, bode well for the housing sector.

“Nashville is a favorite from both a personal and professional standpoint,” said Kate Byford, senior vice president and head of agency finance at Capital One. “There’s a lot going on in that market and we see potential for growth and development across the market. In fact, we just converted one of our first-ever bridge loans as part of our new bridge-to-agency lending program to a Fannie Mae takeout just outside the city in Murfreesboro, Tenn. We plan to continue targeting that area as we expand our presence in the Southeast.”

Nissan has long been a staple in the region, having opened a vehicle assembly plant in a Nashville suburb in 1983 that employs thousands of people, and a number of Fortune 500 companies have headquarters in the area, like HCA Healthcare, Dollar General — a retail winner of the pandemic — Community Health Systems, Tractor Supply and energy company Delek US Holdings.

“Jurisdictions known for low taxes and business friendliness continue to see growth and corporate demand,” said Devin Chen, an executive vice president and the head of commercial real estate strategy at PIMCO. “States like Texas, Tennessee, Florida and the Carolinas come to mind. Many of these states have seen increased demand from tech tenants, and a cultural resurgence in art, music and culinary scenes. In many cases, housing affordability is an added bonus for workers, particularly as it relates to the recent uptick in house prices and demand for more space with the recent trend of flexible-work arrangements.”

Some lenders said they struggle with the term “secondary” when discussing these markets, given that many are “seeing historic post-pandemic growth relative to many gateway cities,” as Jonathan Roth, 3650 REIT co-founder and managing partner, noted.

“[We are] particularly bullish on Miami, Austin and Nashville in the post-pandemic landscape,” Roth said. “We are additionally bullish on cities like Denver that are disproportionately benefitting from an increase in science, technology, engineering and mathematics job growth.”

Airport access and capacity is certainly a sticking point, one that the city of Nashville has homed in on as it looks forward to what the next several years will mean for the city.

Right now, Nashville International Airport (BNA) is in the middle of a $1.2 billion expansion and renovation plan called BNA Vision, with the goal of handling the 23 million travelers it expects to have by 2023. Next year, the airport will also be able to expand its offerings of international flights with the addition of Flair Airlines, and it will also start offering new flights to two Canadian cities: Edmonton and Toronto.

Bank of China’s head of U.S. commercial real estate lending, Anthony Wong, pointed to Nashville as an example of a market his group is partial toward, highlighting the airport’s ongoing expansion as something that will ony further enhance the city’s “overall access and appeal.”