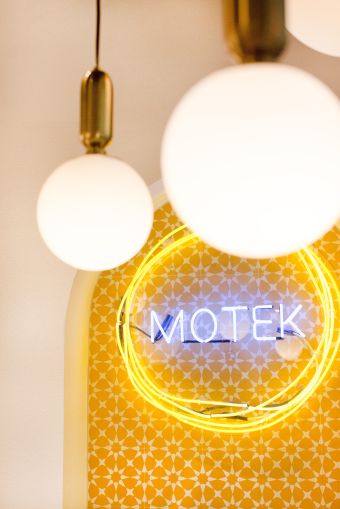 Israeli restaurant Motek Café is expanding across Miami with plans to open three new locations, including a new concept.

The fast-casual establishment first opened its doors last year inside the historic Seybold Building, located at 36 NE 1st Street, in Downtown Miami. “We opened in the middle of the pandemic, when everything was going against us. It was nuts,” said Tessa Levy, Motek Café’s founder. (Motek is an endearment in Hebrew, meaning “sweetheart.”)

As owners of a local jewelry business, Levy and her husband, who have Israeli and Jewish roots, opened the cafe to have access to food they loved, Levy said. The Mediterranean restaurant offers classic dishes such as falafel pita wraps and hummus plates for under $20.

“The food speaks for itself. [The cafe] became popular,” Levy said. Now it’s coming to the Aventura Mall and Miami Beach.

The restaurateurs inked a 2,810-square-foot deal at the newest wing of the Aventura Mall, owned by Jackie Soffer’s Turnberry Associates and Simon Properties, according to InhouseCommercial’s Jared Robins, who represented the tenant. The outpost, formerly occupied by Pain Quotidien, is expected to open in December.

In Miami Beach, the restaurant is taking over 6,000 square feet at 2701 Collins Avenue between 27th and 28th Streets. The outpost is scheduled to open March 2022, Levy said.

Inside its original location, the Seybold Building, will come a Middle Eastern bakery, Sesame. The 4,000-square-foot outpost is projected to open July 2022, according to Levy.

Representatives for the landlords at 2701 Collins Avenue, Amy Klein of J Silver Holdings, and at the Seybold Building, Delaware-based Fusco Management, did not immediately respond to a request for comment.

While famed New York-based chef Einat Admony is often attached to Motek Café, the chef is not part of the expansion Levy said, though she declined to provide more details.