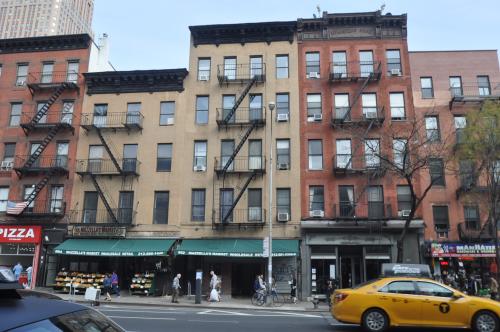 Mazzella's Food Market and four adjacent properties at Ninth Avenue and 48th Street are likely up for development as the owners sell to Chestnut Holdings for $20.6 million. Photo: PropertyShark

The former Hell’s Kitchen site of Mazzella’s Market has sold for $20.6 million, Commercial Observer has learned.

The five adjacent buildings spanning 45,548 square feet at 692, 694, 696, 698 Ninth Avenue and 356 West 48th Street will now be under the ownership of Chestnut Holdings, which paid about $453 per foot, according to Meridian’s Amit Doshi and Shallini Mehra, who brokered the deal for the sellers, the Mazzella family.

The Mazzella family owned the properties for the last 45 years. They include the market, which was operational for 70 years, four stores and 60 apartments, 77 percent of them unregulated.

“The sale marks the end of an era for the famous Mazzella’s Food Market. It was the go-to place for restaurateurs and locals to buy the farm-fresh produce for decades, akin to Gracie’s or Zabar’s of today,” Mehra said. “The deal offers the new owners an excellent opportunity to reposition the retail, upgrade existing units as well as gut renovate the 356 West 48th Street building, which has been vacant for 25 years. Future development is extremely likely, with its 29,520 square feet of air rights.”

Carl Mazzella, proprietor of the market, died in September 2019, and the shop closed permanently during the pandemic.

With 225 feet of wrap-around frontage mostly on Ninth Avenue, any future development will come to serve the transformation of Hell’s Kitchen and its proximity to the Theater District, Times Square, Radio City Music Hall and Rockefeller Center.

“We were able to identify a buyer who saw the potential and closed without any conditions and or contingencies,” Doshi said. “After the new owner completes their value-add business plan, we expect a yield north of a 6 percent cap rate.”

Chestnut Properties did not immediately respond to a request for comment regarding its plans for the future of the properties.