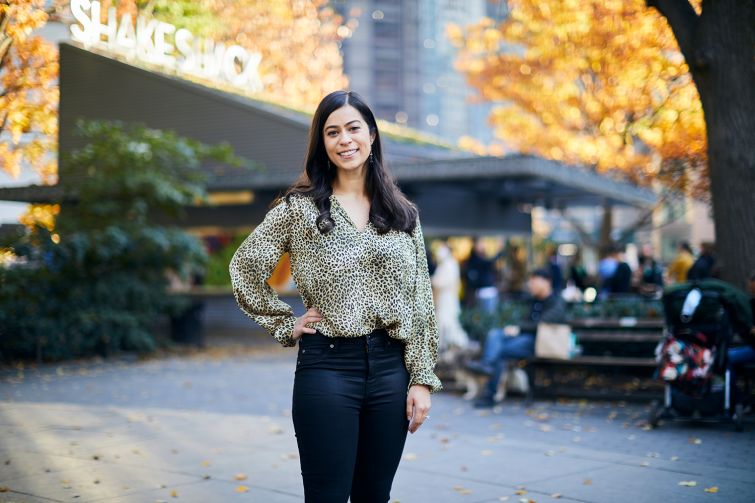 Is there any restaurant chain that has caught the zeitgeist better than Shake Shack? It fits right in with places such as Five Guys, Smashburger, Panera and Sweetgreen in the fast-casual category that really didn’t exist before this century.

To hear Mallika Winsor, the company’s director of real estate strategy and insights, tell it, the idea for the chain bubbled up quite by accident. Around 2002, founder Danny Meyer, who ran two restaurants off Madison Square Park, was asked by that park’s nonprofit conservancy to contribute some food to an effort to clean up the area and make it safer. He contributed a hot dog cart that served food shuttled out from his restaurants. The food cart proved so popular that both Meyer and the conservancy remembered.

“It just took off in a way nobody could have imagined,” Winsor said.

A couple of years later, the conservancy issued a request for proposals for a permanent food kiosk inside Madison Square Park, which became the first Shake Shack. The idea proved so popular and lines so long that Meyer and his associates realized they had hit upon an idea that could travel.

A couple of years later, they opened a second Shake Shack by the Museum of Natural History on the Upper West Side. Everybody seemed to want one, including the New York Mets, who made Shake Shack a must-have in their new ballpark, Citi Field, which opened up in 2009.

Now there are 358 Shake Shacks around the world, 210 owned and operated by Shake Shack Inc. and another 148 operated under license with local partners as of last week. And Meyer and company are nowhere near finished expanding the brand.

The pandemic proved a big hiccup, as it did for other restaurants and restaurant groups. Shake Shack’s annual report for 2020 showed revenue fell to $523 million from $595 million the year before, after enjoying years of robust, top-line growth. Cash flow fell by almost two-thirds. Analysts blamed a slower-than-expected return to offices by consumers.

Winsor stopped by the original Shake Shack last week to answer some questions, coming in from the company’s headquarters on Varick Street in the West Village. By the way, there was a line at the Madison Square Park Shake Shack that day, but it wasn’t unreasonable. The weather was nice, and all the tables were occupied.

Winsor’s answers have been edited for brevity and clarity.

Commercial Observer: What do you do from a practical standpoint for the company?

Mallika Winsor: Shake Shack is at this really amazing point — I guess you would call it an inflection point. My role is to identify where we should be in the United States. I created a long-term strategy for the U.S. portfolio.

And I have a really incredible team; all of our teams are quite complementary to each other. It’s a constant conversation between information and data that we have. The operational model we found success with involves increasing our addressable market in a way that really resonates for the local customer. And, then, of course, getting the best real estate and the best deals.

We like to say it’s a lovely match between the art and the science, which will allow us to bring Shake Shack to as many people as possible.

I know you are responsible for the U.S., but what is going on globally with the brand?

We have some really amazing partners in various markets around the globe. And they are really experts on their local markets. Because, at the end of the day, Shake Shack is all about delivering enlightened hospitality. In order to do that well, you have to really understand the local customer, what they want, what their expectations are, all while remaining true to Shake Shack design. And it has to be a very consistent, a very hospitable experience for every single guest, regardless of what market they live in or where they are buying their food from.

So we’re very, very selective about which partners we choose internationally. But we’ve been experiencing tremendous success with them. And we are very optimistic about that continuing.

Can you name-drop a few foreign locations that you’re in?

Dubai, London, Seoul, Singapore. They’re amazing. We hear it all the time. They are really, really well done. Shake Shack is a very designed corporate brand, but they spend a lot of time and energy and money creating very thoughtful designs that people will enjoy for a long time, and it’s wonderful to see that rolled out properly across the country and the world.

Do they adjust the model to accommodate local tastes?

This part is really fun. We actually have several different format styles, which we can place  in many different locations. We’ve got to fit the one that will resonate the most with the local customer. So, in a super-dense urban setting, we would have a different experience, something probably more digital-forward, something that clicks with the local guests that we’re trying to get to consider our gathering space. And that would be different from a suburban neighborhood.

We are planning drive-thrus that we will be rolling out later this year. The drive-thru concept is really exciting. We think that drive-thru is going to help us unlock a lot of locations that our other formats would not have. So we’re really excited.

We do try to be very thoughtful about which format we place at which site.

In addition to the ones that are open today, can you tell me how many more are in the pipeline?

We obviously have a substantial pipeline ahead of us. Next year we’re targeting upwards of 45 locations. That is exclusively talking about our U.S. portfolio, company-owned and -operated.

Where are you in the overall rollout picture? Is Shake Shack still trying to aggressively expand the brand, or are you getting near the end of that, and you’re just thinking about consolidating what you have, or will have?

We have a ton of white space [ahead], which is really exciting. There are entire markets that we’re not in yet. But we are getting very strong indicators from our data sources and our marketing partners. There is quite a lot of demand in a lot of new markets for Shake Shack.

We recognize where we are strongly performing. And we are also focusing on in-filling those markets as well. So, in that sense, we are trying to get Shake Shack wherever it’s demanded. And we see many, many opportunities ahead of us.

So you’re not anywhere near done?

I would really hope not. Shake Shack was one of my favorite clients in my former job. I thought this was a very exciting moment in this company’s history. I came to help it achieve its full potential.

What was your prior job?

I worked at Cushman & Wakefield. We did a lot of underwriting. That’s how I got my introduction to Shake Shack. I thought they were lovely — a very exciting company with the whole world ahead of them. And I really enjoyed working with them.

I  was a senior associate on the strategic advisory group. Actually, we were hired to help Shake Shack find their first official headquarters. So our office at 225 Varick Street, at that location, we have our home office, our innovation kitchen, and our West Village Shake Shack.

How did Shake Shack respond to the pandemic?

I would say that the pandemic was something none of us had ever gone through before, and presented challenges to us every day. We are doing our best to acknowledge and tackle it as best as possible, but I didn’t see it coming. I don’t know if you did. It was not part of the plan.

You guys were somewhat prescient in having all these outdoor locations.

Wherever possible. Shake Shack at the end of the day is all about creating a community gathering place. And I would say in lovely weather a lot of people enjoy eating outdoors. I know that I do. We try to put ourselves in the guests’ place, and design the best possible space for them.

What do you guys look for in a location?

We look for, ideally, a very busy intersection, great visibility, lots of foot traffic, especially when we are talking about an urban setting. We’re very design-forward, so we love buildings with tall ceilings and significant architectural design already in place.

Obviously, you can’t just stick one anywhere. It has to be special. Is there anything else that you look for?

As a tenant, we work with a lot of different spaces. We thoroughly enjoy that. We definitely enjoy building relationships with landlords and other companies.

We know that things happen. We want to know that who we have created a long-term relationship with is going to partner with us in all situations.

There are things that a landlord can do to create a space that is ideal for success. This might be getting into details, but not every single space has a certificate of occupancy for food and beverage use. We want to get ahead of that before putting our restaurant in there.

There are also certain requirements with exhaust. Is the building already outfitted with that? Also, as a restaurant, we use a lot of utilities, so having a landlord who can understand what our plans are, and to create opportunities to make those possible, helps our ability to function in the space. We like working with people who are responsive to that.

I assume by utilities you mean the garbage has to be picked up, and the HVAC has to work to a certain level. That sort of thing.

Yeah, we need quite a bit of gas and electricity and water. Basic utilities.

How are you guys dealing with oddball diets and food trends?

We definitely have to be aware that there are a lot of dietary foods and restrictions out there. I think our culinary people do a wonderful job, and try to do that with Shake Shack-quality offerings.

Remember, we were a hot dog cart. We expanded to burgers. Now we have a lot of chicken on our menu. At our West Village location and a couple of others, we have a veggie burger. We try to accommodate different palates.

We’re very aware. To the extent that we can, we include a gluten-free bun. And I’m sure our culinary people continue to innovate in a way that still speaks to the Shake Shack brand.

We’re very fortunate to have the brand that we do. It’s amazing that so many landlords and developers want to work with us, whether they are creating brand-new concepts, or working with a very established center. It’s our responsibility to be very thoughtful about which buildings we enter, and with whom.

The mix of our neighbors is very central to that process. It’s important to be around neighbors that will be complementary to our services, and we’re very lucky that fine casual burgers are complementary to a lot of different formats, whether you’re talking about traditional retail or other opportunities.

It sounds like Shake Shack isn’t going to go to a place just because they have space to fill. You have to have a concept. You have to demonstrate that you know what you’re doing.

This interview originally appeared in Commercial Observer’s Tenant Talk newsletter. Consider subscribing to it and others here.