Companies such as Jones, Obie and Billy aim to streamline the insurance process and compliance for investors and landlords 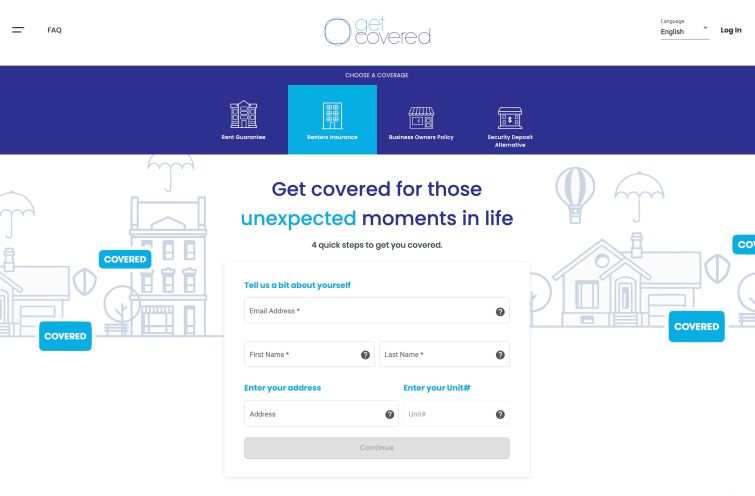 Get Covered is among the proptech firms making inroads into real estate insurance. Image: Get Covered

Like many industries, real estate is more than ever dependent on technological innovation. However, only in the past few years has proptech begun to address the problems stemming from insurance compliance in the real estate industry.

Now, though, insurtech — or the use of technology to make the insurance industry more efficient — has come to proptech, making a notable difference for startup founders, venture capitalists and the industry as a whole.

One person who has helped drive the use of insurtech in real estate is Omri Stern, co-founder and CEO of Jones, one of the first proptech startups to address insurance compliance. As an enterprise software salesman earlier in his career, Stern found that real estate companies were reluctant to adopt a technology product without proof that it could drive return on investment (ROI).

“What stood in the way of that adoption was insurance compliance,” Stern said. “Anytime we would land a new portfolio, a new customer, we would have to get our insurance certificate approved on every property. We’d have to issue a unique certificate of insurance with unique policy data for each one of the hundreds of properties in our client’s portfolio. That became a barrier to transacting. It was very painful.”

That barrier became Stern’s inspiration for creating Jones in 2017, he said.

“We learned that there was a massive opportunity to develop the industry’s first digital system of record for insurance and compliance data, so that you could come to one place to look up the insurance information of anybody that you’re hiring or any tenant that you’re leasing space to and have that live in one database in one real-time system of record.”

Today, the software Jones provides to owners, property managers, tenants and construction managers, is designed to simplify the workflow for getting an approved insurance certificate, he said. “Over the past couple of years the company’s been growing 15 percent month on month. We’re in over 7,000 commercial real estate properties across office, industrial, retail and multifamily, with almost a billion square feet of real estate.”

Jones’ growth attracted further VC interest in July. The company announced it had raised $12.5 million in a Series A investment led by JLL Spark and Khosla Ventures, along with Camber Creek, Rudin Management, DivcoWest and Sage Realty, as well as seed investors who doubled down on their investments.

Among the next generation of proptech startups addressing insurance issues is Chicago-based Obie, a landlord insurance platform designed primarily for residential real estate investors, said Aaron Letzeiser, who, with his brother Ryan, co-founded the firm.

“Obie is for small DIY landlords who have single-family rental products, which is obviously very popular right now, all the way up to your institutional owners, whether those are large SFR portfolios, or small- to medium-sized apartment buildings,” Letzeiser said.

Obie uses its technology to eliminate paper applications, long wait times and multiple back-and-forth communications with brokers, according to the company website.

“We wanted to be able to allow somebody to sit on their couch on a Saturday morning and grab insurance for property that they’re investing in, as opposed to sending an email and going through a seven-, 10-, 14-day process to actually get a quote and buy a policy,” Letzeiser said. “We can do it instantly. We had one yesterday that was quoted in about two minutes without talking to anybody on our end.”

Get Covered was started in 2017 in Manhattan when CEO Brandon Tobman, along with two co-founders, realized that the biggest pain point for property managers wasn’t collecting rents, but tracking who was properly insured. “We started this, really, to go after the smaller landlords, but we quickly realized that the large landlords had a bigger need and a bigger problem.”

“The next biggest challenge was meeting the building’s minimum requirements,” Tobman said. “For example, a renter moves into an apartment and [the landlord] requires $100,000 in liability for bed-bug protection. That’s a pain for most people to go through the process of trying to find [such insurance]. With us it’s a single click and they can buy all of their coverage needs.”

The startup’s payment model takes a percentage of every policy that gets sold on its platform, Tobman said, while its software is free to property managers and owners.

In a boost to Get Covered’s efforts to make the property manager and tenant side of the insurance equation more efficient, the startup earlier this month closed a $7 million Series A round led by RET Ventures, and joined by Crocker Mountain and Pelican Ventures.

From a venture capital investor perspective, “insurance touches a number of our different investments, but our first sort of pure-play insurance investment out of RET is Get Covered,” said Sam Kroll, the firm’s associate who focuses on insurance proptech. “I think that shows we’ve been patient and want to find the right solution. We view it as a very critical part of our strategy and as an extension of the tech stack and operating stack of our investors, who represent many of the largest owners and operators on the multifamily side of the industry.”

Billy, a Brooklyn-based construction liability insurance startup, is working in yet another vertical within real estate.

Although construction site insurance of various types addresses most worker and other liability issues, Billy seeks to consolidate all those carriers and documents on one accessible management software platform.

The company’s proprietary software reads and validates insurance documents to determine if the user is meeting requirements, said Nyasha-Harmony Gutsa, co-founder and CEO  of Billy. “One of the things that we are pioneers of is that we do the insurance verification with carriers themselves.” Gutsa said the company can notify the carrier whether someone has skipped a policy and no longer has valid insurance or is in compliance.

As more proptech startups tackle efficiency, transparency and cost issues relating to insurance in real estate, founders and VCs are finding common ground with the insurance industry — which, like the property industry, has often been slow to adopt technology.

“The competition that had existed prior to the evolution of proptech and the adoption of technology [by the real estate industry] was in the form of insurance brokerages that sometimes offer this service for free, and pure-play professional service firms, who’ve been around for 10 to 20 years,” Jones’ Stern said. “Other than that activity, which is nominal, the real competition is just the status quo of dealing with spreadsheets and emails. That’s the green space.”

“I think that a rising tide raises all ships,” said Letzeiser, when asked about competition among proptech startups and incumbent insurance companies. “At the end of the day, what [insurance startups] Lemonade or Hippo have done has forced the incumbent carriers to continue to innovate and get better. That means more choice for the landlord. It means more opportunity and transparency, which is ultimately what most of these real estate investors are looking for.”