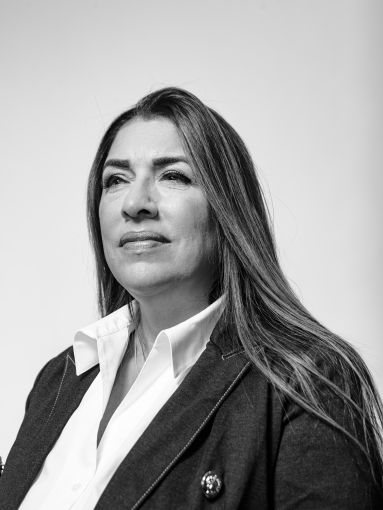 It was 1988 when Velez Organization first had the opportunity to develop affordable housing for New York City. It was a big deal for Andrew Velez and the construction firm he founded in 1972 out of his Flatbush, Brooklyn, apartment.

Velez Organization was one of five companies selected by the Neighborhood Builders Program, the city’s first program to give minority- and women-owned real estate and contracting firms the chance to become developers of new affordable housing.

Velez deemed his 21-year-old daughter, Elizabeth Velez, fit to lead the effort on his firm’s behalf. One of seven daughters, Elizabeth had grown up on construction sites, and was the only kid to follow his path. (Andrew Velez, who died in 2019, “would introduce me as the son he never had,” Elizabeth Velez recalled.)

Having recently graduated from Hofstra University, Velez gave up plans to work for Aetna in its construction underwriting department to build and sell 34 two-family homes in the South Bronx in the late 1980s, and she has never looked back.

“I walked into an environment where it was a pilot program that they had set up,” said Velez, the 54-year-old president of Velez Organization since 2006. “And we ended up building about 600 units of affordable housing throughout the city.”

(And that’s a number that should increase “exponentially,” Velez said, as her firm is part of the team on the $400 million plan to redevelop 7.2 acres of the Kingsboro Psychiatric Center campus in East Flatbush, Brooklyn, near where she grew up. Plans include 900 affordable homes, per New York Yimby.)

The city’s Department of Housing Preservation and Development and the business advocate nonprofit Partnership for New York City co-sponsored the Neighborhood Builders Program.

Plus, the program allowed Velez to form a seminal relationship with Kathryn Wylde, who at the time was responsible for developing and managing affordable housing and economic development programs for the Partnership.

“She was somebody that I looked up to, somebody who’s not afraid to create change, to take on challenges in New York,” Velez said about Wylde, the Partnership’s current president and CEO. “She also was and is I think a tremendous cheerleader for New York. And I felt aligned with that in so many ways.”

Wylde has been Velez’s informal mentor ever since, a role that Velez herself has held with many women and minorities. Over the years, Wylde and Velez have become friends too. Most recently Wylde invited Velez to a shopping event with Gov. Kathy Hochul and businesswomen hosted by women’s fashion brand Lafayette 148. And, in August, Velez and her husband (she and her second husband tied the knot in November 2019) visited Wylde and her husband at the latter’s home in Puerto Rico. (“We both have husbands and homes in Puerto Rico,” Wylde said with a chuckle.)

When they first met in 1988, Wylde noticed Velez immediately due to one thing in particular.

Like Wylde, Velez has been engaged and involved in influencing public policy decisions in New York. “She has a good mind for public policy, which many people in the private sector do not,” Wylde noted.

For Velez, that path includes being a proponent of diversity and business issues in the building industry. To that end, she is winding down her two-year term as chair of the New York Building Congress, an association committed to promoting the growth and success of the construction industry in New York City. Her election to the post in January 2020 made her the first Latina and the second woman to hold the position in the organization’s 100-year history (architect Marilyn Jordan Taylor served in the role from 2002 to 2004).

Velez, a mother of a 24-year-old son who works at Velez Organization along with her 80-year-old mother, started in the NYBC role at a trying time, at the onset of the coronavirus pandemic. Still, she guided the organization to its highest-ever membership count of more than 500 members, a 48 percent increase over the last 10 years.

During the pandemic, NYBC’s role was “to be a giver and a receiver of information” to the organization’s members as well as the media, Velez said.

Carlo A. Scissura, the president and CEO of the NYBC, tipped his hat at Velez for being a “virtual chair for much of her tenure.” He added: “She played a critical role in helping particularly MWBE [Minority- and Women-Owned Business Enterprise] contractors and engineers, design firms and architects navigate a pandemic, navigate a post-pandemic, giving mentorship to smaller companies, and really being seen as — her and I together — [an organization] the industry can rely on.”

It was only a few months ago — about the time when Velez and her husband moved to City Island in the Bronx from Manhattan — that NYBC’s meetings went back to in-person.

“She held the organization together; she kept it viable,” said Milo Riverso, who served as the NYBC chair before Velez. “She didn’t allow the economics of the industry to diminish the organization in any way. She maintained the virtual meetings and virtual events. She was a true leader in every aspect of the word.”

One of her big accomplishments was creating a NYBC diversity and inclusion task force, which resulted in a permanent council co-chaired by Velez and Cheryl McKissack Daniel, president and CEO of McKissack & McKissack and the chair of the New York Building Foundation, the charitable arm of the NYBC.

The council, per Daniel, “deals with MWBE procurement, minorities and women in the workforce of design, construction and real estate.” Its initiatives? “We are looking to put together a plan where companies can voluntarily join and share the number of minorities and women they have in their companies, what they’re doing in their companies to those ends, and trying to come up with best practices,” Daniel said.

Velez’s role in this has impressed Daniel.

“Liz is an icon in the construction community and has been an advocate for MWBE businesses both on the state and the city levels,” she said.

Velez serves on the advisory boards of numerous city and state agencies, as well as industry nonprofits and other groups. Velez was appointed to Mayor Bill de Blasio’s Construction and Real Estate Sector Advisory Council in May 2020, set up to aid the administration’s efforts to restart the economy and city life. The same month, Velez was tapped for then-Gov. Andrew Cuomo’s New York Forward Reopening Advisory Board.

Her other commitments include being a member of Hofstra business school’s advisory board “as they look to make change and be more inclusive,” per Velez, who earned her MBA from the school. Velez is a trustee of Boricua College, an accredited private institution serving primarily Latinas through three campuses in New York, and served as a member of Cuomo’s New York Stands with Puerto Rico Recovery and Rebuilding Initiative launched after Hurricane Maria struck in 2018, among many others.

Then there’s the mentoring.

Velez Organization is the program manager for the New York City School Construction Authority’s Mentor Technical Assistance Program, performing assessments, providing training and bringing in consultants for the 140 participating firms, according to Gregory Glasgow, the director of operations and business development at the SCA. (Velez also provides on-call construction management services under SCA’s emergency response program when notified of a structural failure or potential failure at a facility.)

Velez has created a number of new initiatives for the SCA mentees, like the “Power Breakfast Series.” In addition to bringing in industry leaders to provide advice and guidance on how to grow a firm, Velez herself often imparts her knowledge to attendees.

When talking about all of her roles in the construction world, Velez exudes passion and commitment.

Even when COVID caused the SCA to hit pause on the mentor program for a couple of months, Velez continued gratis to connect “with 175 minority- and women-owned businesses on a weekly basis via Zoom, telling them where to find their personal protective equipment, how to get their [Paycheck Protection Program] loans, just how to survive through the pandemic,” Velez said.

And all of this work is on top of Velez Organization’s construction jobs. To that end, her firm has completed more than $20 billion of significant educational, health care and large-scale projects throughout New York. Her two favorite projects have been the restoration of the Audubon Ballroom in 2000 and the deconstruction of the old Yankee Stadium, combined with the construction of the new Heritage Field in its place, completed in 2011.

The 75-person Velez Organization worked for the New York City Economic Development Corp. on the Audubon Ballroom project, New York City’s monument to Malcolm X at 3940 Broadway in Washington Heights. Velez was the general contractor, responsible for the $3 million restoration and renovation (her workers were even painted into the mural there). On the Yankee Stadium job, Velez Organization worked with Turner Construction and for the EDC and the city Parks Department in demolishing the original stadium and replacing it with a 10-acre public recreational facility.

But it’s her role as chair of the NYBC that may be the most significant to her professionally.

“It has been the most terrific experience, I think, of my professional career because it was so unexpected.”

A member of the NYBC for over 20 years, Velez had never considered the chair role until Riverso, the last chair, broached it with her. Riverso had worked with Velez on job sites in his various professional roles and found Velez to be “very honorable, aggressive and very, very professional.”

Considering the social and economic climate, Riverso thought Velez was “the best person for the organization,” he said. “And I thought it was time to make the second woman chairman of the New York Building Congress, and a Puerto Rican — a Latina. You know, with everything the industry is experiencing, I thought it was the right thing to do.” The full board concurred.

As her NYBC term comes to a close, the pandemic and its consequences are far from over. Velez hopes she has made a difference.

“This pandemic, this time, maybe even my role as chair during this time has charted the course for the next 100 years — that it’s only going to be stronger, fairer, more inclusive as an industry. I’m looking forward to watching it all develop.”

At the time of publication, Velez was focused on the NYBC’s centennial ball being held on Nov. 18 at the Jacob K. Javits Convention Center. Things are coming full circle as Velez Organization was part of the team that worked on the early-2010s renovation of Javits.

“I think having her stand up at the centennial as chair of the Building Congress … to me that says this industry has come a long way in 100 years,” Scissura said. “I’m very proud of that.”

And Velez thinks her dad would be proud too.

“When I started at 20 years old, my father actually told me construction was no place for a woman,” Velez said. “I remember when he told me that I think I laughed and was like, ‘Okay, I’ll show you!’ He wanted to, I think, manage my expectations; he wanted to protect me; it was not in a malicious way. And so, you know, to kind of come full circle to what he said to me back when I was 20, to be the chair of the New York Building Congress … [if he were here today,] I would say to him, ‘yeah, construction is a place for a woman. Sorry, Dad.’”