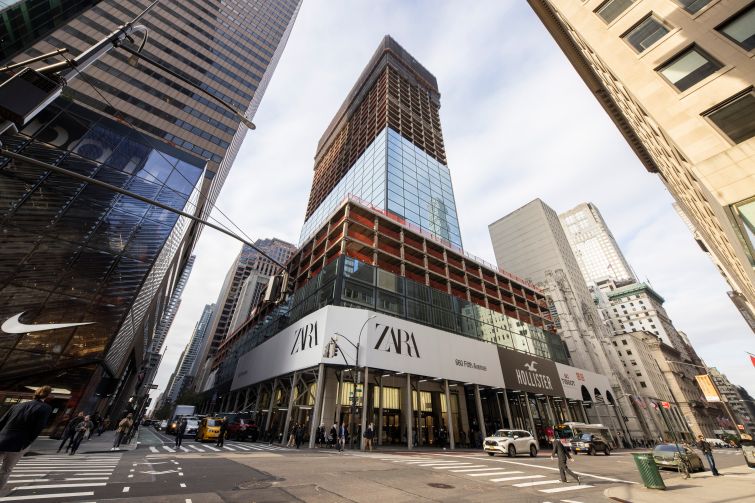 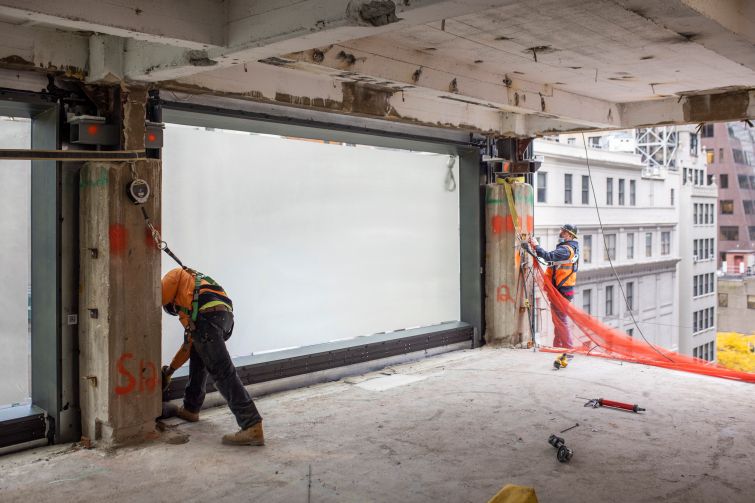 Workers attach a 20-foot by 10-foot piece of glass facade to the building's exterior. Brookfield claims the windows are some of the biggest ever used on a skyscraper. Photo: Jakob Dahlin 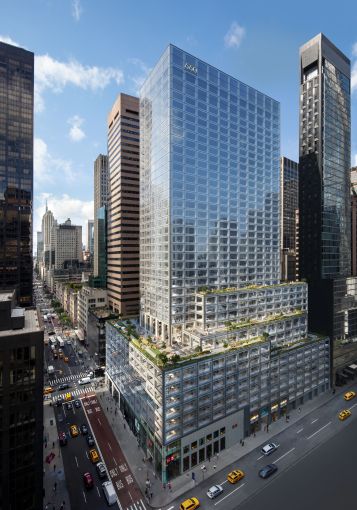 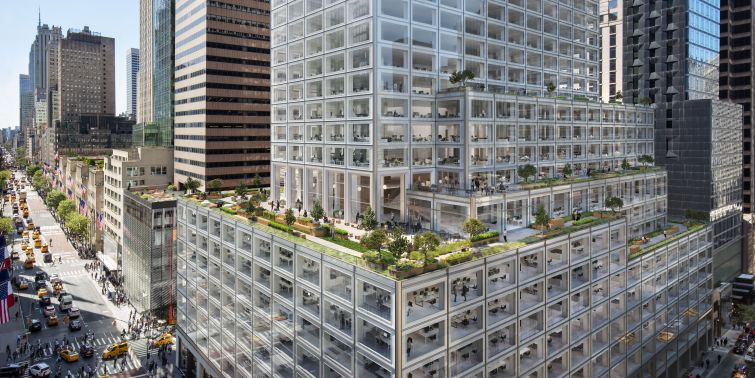 The 41-story building also has a number of mechanical setbacks that are being turned into 40,000 square feet of usable terraces for tenants. Rebecca Baird-Remba

Brookfield is preserving the building's 1957 structure. However adding the new facade panels slightly increases the building's square footage, requiring the company to remove portions of some office floors in order to maintain the same overall floor area. Rebecca Baird-Remba 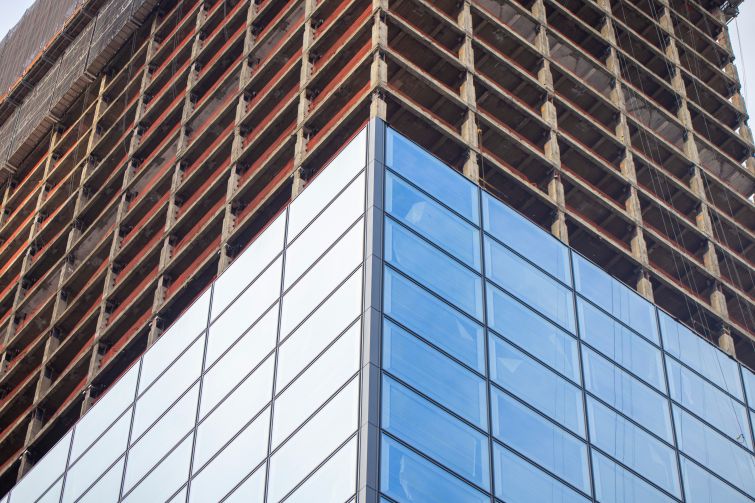 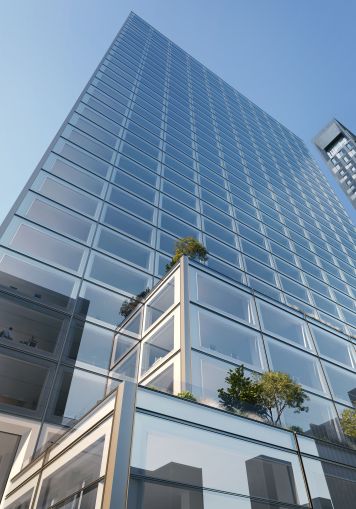 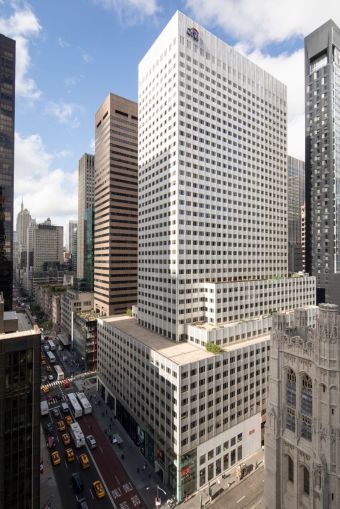 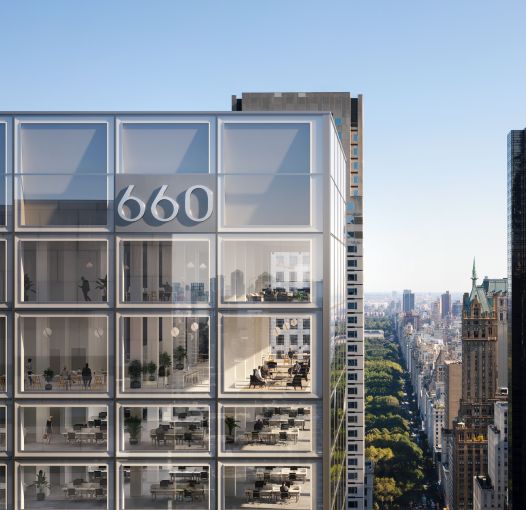 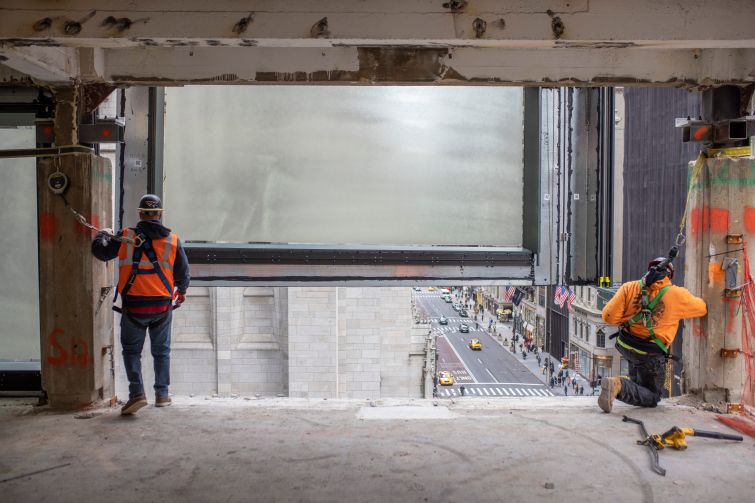 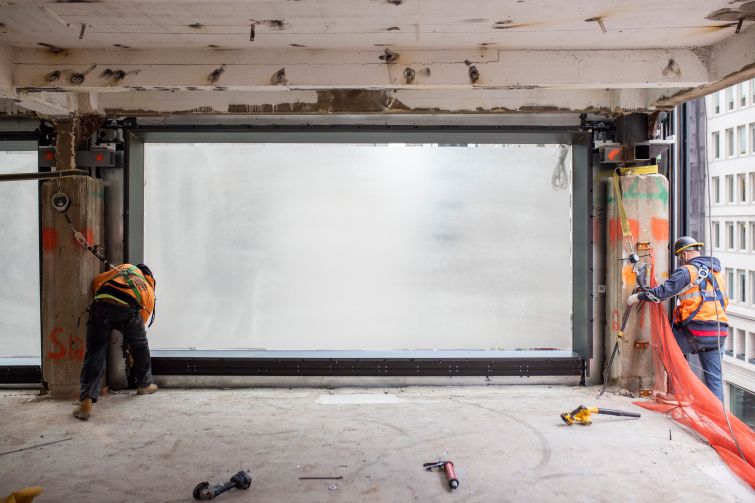 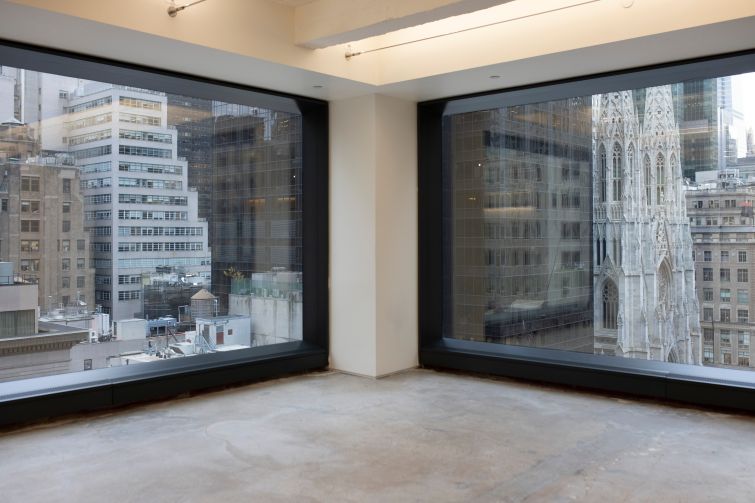 It’s been three years since Brookfield Properties inked a 99-year lease for Kushner Companies’ 666 Fifth Avenue, allowing Kushner to pay down the $1.1 billion in debt on the building and buy out its co-owner, Vornado Realty Trust.

Now, Brookfield is in the middle of its $400 million, KPF-designed transformation of the 41-story office tower, which includes an address change to 660 Fifth Avenue. Although the structure will remain, Brookfield is undertaking a soup-to-nuts renovation of the 1.6 million-square-foot office tower, including new mechanical systems, a new lobby, a new facade made of floor-to-ceiling glass panels, and converting the building’s mechanical setbacks into usable terraces for tenants.

The building’s old aluminum facade was so porous that “you could feel the wind blowing through it,” said David Noyes, the director of construction for Brookfield. The new facade panels consist of 19-by-11-foot pieces of glass, which Brookfield claims are the biggest windows ever used on a skyscraper. The developer estimates the new facade will reduce the building’s carbon emissions by 50 to 60 percent, coupled with a new energy-efficient heating and cooling system known as a dedicated outdoor air system (DOAS). Work is well underway — interior demolition began in May 2020, and construction is expected to be substantially complete in October 2022.

The building, which fronts an entire block between West 52nd and West 53rd streets, was originally built in 1957 by Tishman Realty and Construction. When it opened, it featured what was then the world’s largest aluminum curtain wall, prefabricated in Louisville, Ky., and stamped with little rhombuses to give the panels texture. The lobby included a large T-shaped public atrium and a waterfall sculpture by Isamu Noguchi.

On the top floor was a classic Manhattan power lunch spot called Top of the Sixes, which was supposed to be the setting for Matthew McConaughey and Leonardo DiCaprio’s famous lunch in “The Wolf of Wall Street.” It shuttered in 1996 and was replaced by a cigar club. After Brookfield’s renovation, it will likely become prime office space.

The building’s setbacks, on the eighth, 10th, 11th and 15th floors, originally hosted 72 bright spotlights that lit up the building in what was known as the “Tower of Light.” Now those spaces will be turned into roughly 40,000 square feet of landscaped outdoor space for tenants. The elevators are being upgraded and replaced with new cabs and a destination dispatch system. Brookfield is also expanding and renovating the lobby, which will be outfitted in white terrazzo floors and walls, and burned Japanese wood paneling.

The typical reception desk will be replaced by building concierge staff, who will use iPads to check in guests. Vornado Realty Trust owns the building’s main retail storefronts on Fifth Avenue — currently occupied by Zara and Uniqlo — but Brookfield is considering some other possibilities for the 53rd Street side of the building.

“We’re exploring doing a food hall. We have shops at Manhattan West and we have Hudson Eats downtown, so we could do a small version of that,” said Sabrina Kanner, Brookfield’s executive vice president of design and construction. “But the [lobby] is just kind of sprawling and had been dissected over the years and cut off because of the entrances. So we wanted to make it smaller, a little more special and more intuitive.”