Beyond the Flight to Quality: Why Demand for Mixed-Use Office is Rising Post-Covid 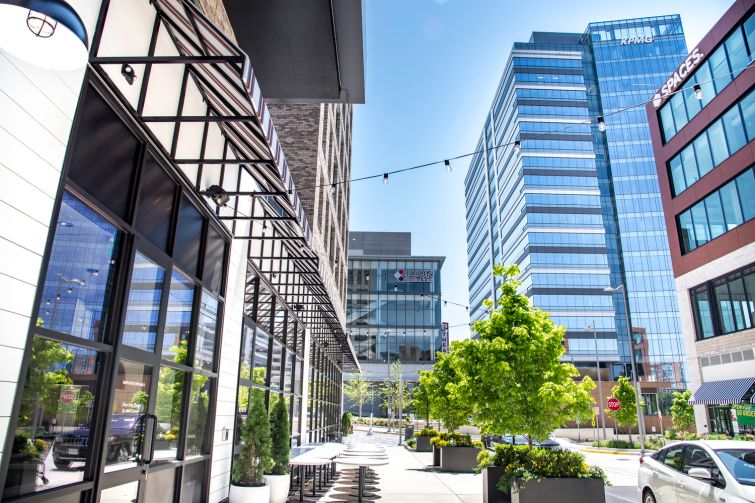 Tysons, Va., is an urban center in the northern part of the state that is technically small – a population under 25,000 – but boasts a corporate presence that far exceeds its size. Home to companies from Capital One and Booz Allen Hamilton to Freddie Mac, it boasts a slew of impressive office buildings and complexes.

In the late innings of the COVID-19 pandemic, demand for office space in Tysons appears to be bucking some trends, according to local developers and brokers.

In a market environment characterized by lease renewals, Tysons saw the only new lease in Northern Virginia over 50,000 square feet during the second quarter of 2021, according to CBRE’s second quarter research. Gross leasing activity for the Northern Virginia market totaled 2.1 million square feet in the three months through June, up 62 percent over the prior quarter, CBRE said.

The Gensler-designed Boro Tower, co-developed by The Meridian Group and Rockefeller Group, and completed in 2019 as part of Meridian’s 4.5-million-square-foot Boro District, has seen activity rise dramatically since mid-year as companies evaluate return to office plans and future workplace requirements.

Located in Tysons across from the Greensboro Metro Station, the building’s distinctions in the market are many, from strong rents and the first DOAS system in the area’s Hill submarket to a diverse tenant roll peppered with law, tech, media, FIRE, and more. The tower’s tenants include KPMG, Tegna, Hogan Lovells, Womble Bond Dickinson, and Alion Science and Technology, among others.

The heavy demand for the new building – currently 80 percent leased with active negotiations for more than 10 percent of the building’s remaining available space – stems from more than just a flight to quality post-COVID.  According to the owners, tenants in the market are gravitating to a combination of high-quality space, accessibility, and an abundance of amenities – the kind of experiential space that is inherently offered by mixed-use development.

The 20-story Boro Tower is so named due to its location in The Boro, a 15-acre mixed-use complex that offers a slew of on-site options for work, leisure, entertainment, shopping, and dining.

Boro Tower features a shimmering glass curtain wall, up to 10-foot ceiling heights, and efficient floor plates that minimize columns while accenting daylight and majestic views from the Blue Ridge Mountains to downtown Washington. The building’s many amenities include a rooftop terrace, fitness center, and over 10,000-square-feet of retail space in the lobby.

“Tysons has always benefited from convenience and quality,”  Goldfarb said. “But what we’re seeing with Boro Tower is a strong affirmation that companies are gravitating to mixed-use projects because they help employees make the most of their day – by offering more opportunities for personal and professional enjoyment with less friction between the office and home.”

“One thing we’ve always believed at The Meridian Group is that if we can create an innovative, special place in a Central Business District or an urban district in the suburbs, we will be successful in leasing. That’s been our mantra from day one,” said Block, who emphasizes the need for projects of this quality now. “These innovative urban districts are even more important post-COVID than they were pre-COVID because not only do people want clean air and outdoor spaces, which we have at Boro Tower, but companies today need a reason to make their employees excited to come back to the workplace. Our building does that.”

Boro Tower’s many desirable features are completely tenant-driven, designed to make Boro Tower a place people would want to spend a day in.

“We made decisions based on health, wellness, and thermal comfort,” said Goldfarb. “Our HVAC system is a DOAS – Dedicated Outdoor Air System – which means we’re circulating 100 percent outside air throughout the building, making us the first building in the submarket to offer that.”

Goldfarb also emphasizes the building’s architecture and design, noting that there is simply nothing else like it in the submarket.

“One of the things I’m most proud of is that the building’s design is crisp, contemporary, and compatible with the area, which you don’t often get,” Goldfarb said. “The reason why the Meridian/Rockefeller partnership is so strong is because we are both believers in the added value of good design. We all know that nothing sells itself. You need really top-tier, best-in-class talent, especially on the architecture.”

Further evidence of the building’s appeal is that Boro Tower commands the top rent in the submarket.

“To date we’re the only building in this market with $60 rents,” Goldfarb said. “With each new lease we sign, our rent has steadily increased, even through COVID. That speaks to quality, as does The Boro District overall. The Hill submarket beats occupancy in the rest of Tysons by a full five percentage points.”

Goldfarb also notes that the way in which the building integrates with The Boro District’s other offerings creates a unique and welcoming community, referring to this integration as retrofitting suburbia.

“That combination of being of-the-moment but also compatible with the broader urban fabric in Tysons is something that we are very proud of,” Goldfarb said. “Boro Tower is not a high-quality office building in a suburban parking lot. It’s part of a highly-desirable mixed-use environment that works so well because it’s in Tysons.”

She emphasizes that The Boro includes a brand-new residential community, ground floor restaurants, and programming in the town square, all things that make it not an office community, but a genuine neighborhood within an accessible, vibrant submarket.

“You go there on a weeknight and people are on the street. You feel like you’re part of a place,” she said. “Gary and Meridian have created an urban street grid and an urban environment.”

“It’s got a Whole Foods, a Showplace Icon Theater, a plethora of sit-down and fast casual restaurants, and a one-acre park,” Block said. “Companies that want to get back to the office want an offering that their employees feel excited about, and that’s what Boro Tower offers, not only in and of itself, but also as part of The Boro district.”

Given all that Boro Tower has to offer tenants, the building’s popularity shows that as we continue learning to navigate our world through the COVID morass, the flight-to-quality and draw of mixed-use will be as pronounced as ever.

“With everything we’ve seen from COVID, even with all the challenges in the market, this tower shows that quality is still in demand,” Goldfarb said. “In fact, it may be more important than ever for that sort of quality to be present for real success.”