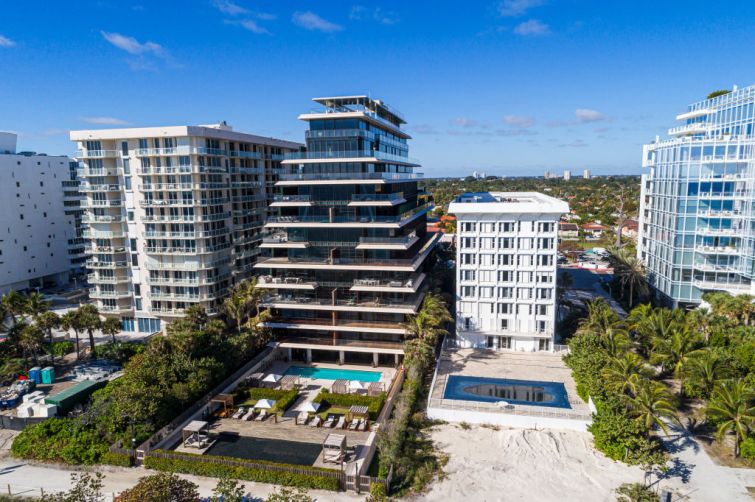 As the Magic City vies to become a cryptocurrency capital — hosting the Bitcoin 2021 conference earlier this year and its mayor, Francis Suarez, championing the new technology — Arte’s developers, Alex Sapir and Giovanni Fasciano, pounced. In May, they sold an apartment for $22.5 million paid for entirely in cryptocurrency. At the time, the deal was said to be the largest transaction using the digital tokens.

The oceanfront condo, located at 8955 Collins Avenue, sits just two blocks north from Champlain Towers South, now the site of the tragic building collapse that killed nearly 100 people. Even as first responders scoured the rubble, looking for signs of life, one of Arte’s apartments sold for $12 million in late June.

The 12-story building, which was completed in 2020, only holds 16 apartments, two of which were sold to Sapir’s mother and sister for a combined $22.1 million, property records show.

It’s not just the Sapir family. The property also counts a famous Trump family member and former White House advisor as a tenant.

Commercial Observer sat down with co-developer Fasciano, who’s originally from Italy, to discuss his embrace of digital money. (The interview was edited for length and clarity.)

Commercial Observer: Why did you decide to accept cryptocurrency?

Giovanni Fasciano: We were at the end of the project and were just missing a few units to sell. We understood that cryptocurrency had created a huge network of new wealth. And we believed that opening up the real estate world to all these new network individuals [would] be a great way for them to move assets into real investments. The market cap of this cryptocurrency is enormous. We’re talking about over $2 trillion.

Can you tell me anything about the buyer?

He’s young. We are covered by an NDA, so we can’t disclose.

But just to give you an idea, our clients until that point were mainly from the Northeast, private equity individuals, high-net worth individuals from New York. These are completely different networks than the one we’re talking about now with cryptocurrency.

Can you walk me through the transaction? How exactly does selling real estate with crypto work?

Since we couldn’t take any risk on the transaction, we used a third-party company. The transaction was officially in cryptocurrency, but what we got credited was the equal price in US dollars. So at the end, we were paid in US dollars and the third party did the exchange for us.

[After getting] the offer, we closed in exactly two weeks. The buyer went through the traditional KYC (Know Your Customer) process and requested two days for inspections. The funds were quicker to close — you cut out a lot of procedures that [involve] the bank system.

You incurred very little risk. So are you surprised that not more developers have embraced this?

I’m actually not very surprised. This is an old-school business. Our procedures are still very old. But I believe that it will only become more accepted as time goes on. Developers need to evolve and modernize.

Besides crypto, Arte is noteworthy because of its proximity to Champlain South, the condo that collapsed this summer. How has the tragedy affected your building?

We have a west building on top of our parking space and a beautiful clubhouse with a tennis court [across the street from the main residential building]. For more than a month, we essentially gave first responders food, drinks [at] our west building and clubhouse. They were coming over to dress, to shower. We did the best we could to assist in this tragedy.

Can you tell me more about how the horrific incident affected business? Did it change buyer appetite?

Not at all. We still don’t know why [the building collapsed].

After leaving the White House, Ivanka Trump and Jared Kusher have been renting a unit at Arte. How are they as tenants? Was there any blowback from other unit owners, especially after the January 6 riot?

We are happy to have them as any other new buyers we have in the building — nothing different than with the rest of the residents.