Analyzing US Cities in the 2020s

Post-pandemic life is on the horizon, but which U.S. markets are best positioned to benefit over the next decade? 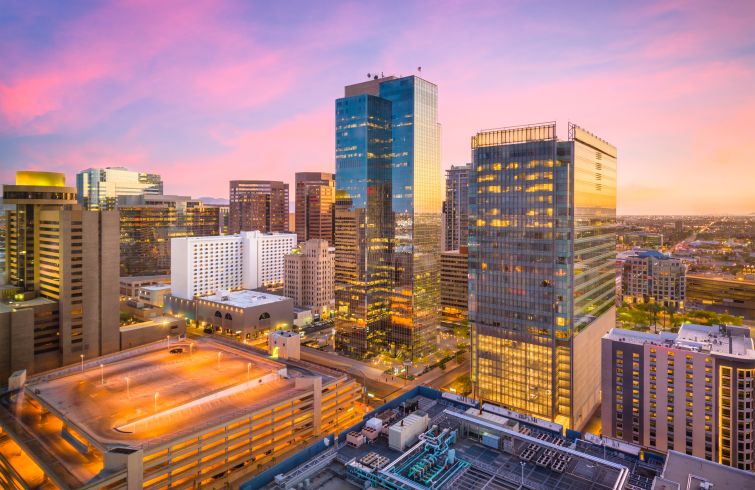 The coronavirus has changed how we work, shop, communicate and even where we choose to live. While some of these changes will be temporary, we believe that the pandemic has accelerated trends that will have a lasting impact on our lives and cities in the United States. Certain cities and submarkets within cities are better positioned to capitalize on these trends, creating opportunities for investors.

The U.S. economic recovery from the pandemic has been greater than that of most other developed economic recoveries thus far. Because the U.S. has relatively widespread broadband access and an economy not reliant on the physical production of goods, U.S. consumers have adopted more quickly to digital life. Certain American markets are well-positioned to benefit from the continued digital shift, while others are not. Three key factors will determine which markets these are:

High-paying service-based industries, such as technology, financial and professional services, and legal services, have been resilient during the pandemic, as workers in those industries have quickly adapted to digital business methods. Recent technological developments in data connectivity, data storage and video communication have allowed workers in these industries to conduct business remotely. Certain areas of the health care industry, such as life sciences and medical research, have not only been resilient but have also grown due to renewed interest and funding during the pandemic.

While some cities with high exposure to these have outperformed during the pandemic, others have not. Long-term demographic trends, such as millennials reaching homeownership age, are having a considerable impact on where workers in these industries desire to be. Specifically, markets such as Tampa, Raleigh and Phoenix, with a high proportion of employment in service-based industries and a low cost of living should continue to benefit from this shift. Exceptions are Detroit and Philadelphia, which also have a similar employment profile but are based around manufacturing company operations. 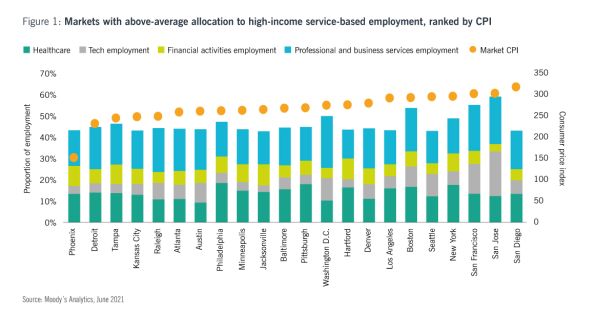 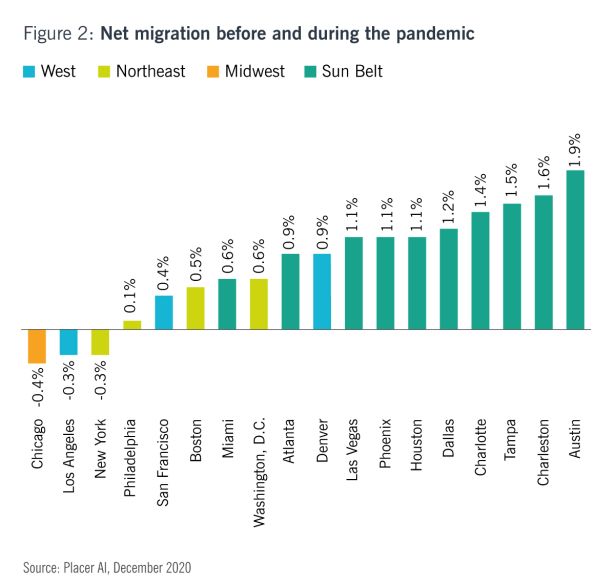 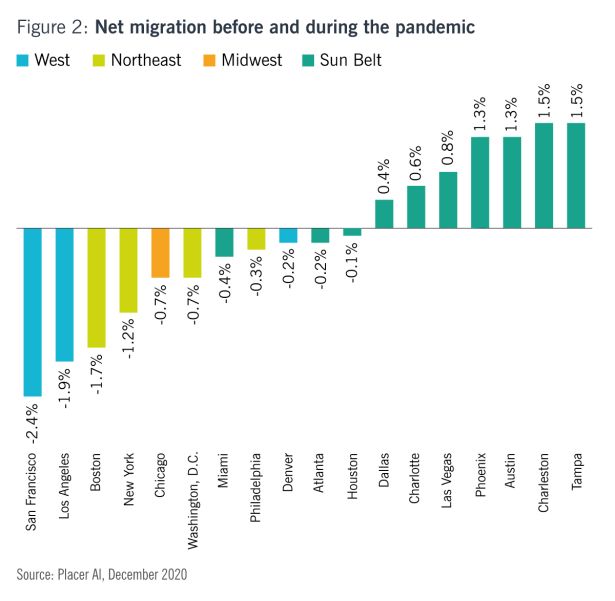 Living in a core coastal market has never been more expensive, particularly on a relative basis. Coastal markets had an even greater discrepancy between Class A apartment rents to median incomes in 2019 than during the housing boom of the mid-2000s. Meanwhile, for secondary markets, this ratio was lower in 2019 than in 2007. With greater flexibility afforded to workers, the economic and lifestyle calculation of living in many of the country’s most expensive markets makes increasingly less sense.

During the 2010s, many millennials postponed homeownership to stay in high-cost markets. Many popular leisure and entertainment venues were forced to close during the pandemic, significantly decreasing the appeal of living in high-cost markets and paying high-cost rents. Therefore, many millennials, having reached the age traditionally associated with first-time homeownership (30 to 39), bought homes in lower-cost markets by taking advantage of low interest rates and higher savings rates. 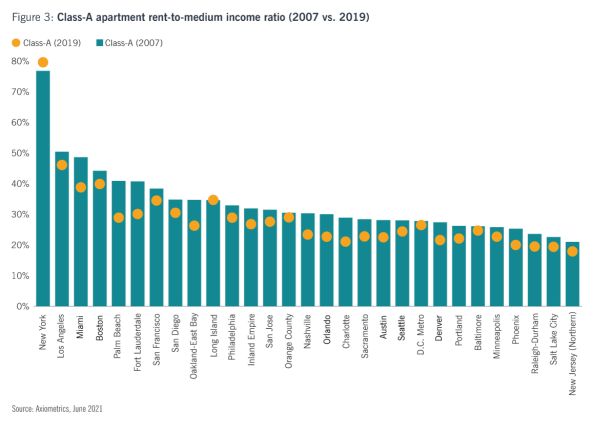 Markets such as Austin, Phoenix, Charlotte, Raleigh and Tampa should continue to benefit from inward migration of high-income residents from higher-cost markets such as New York, Los Angeles and San Francisco until there is more housing-cost parity among high-cost and low-cost markets. While these migration trends were already apparent pre-coronavirus, we believe these shifts have accelerated due to the pandemic.

At the outset of the pandemic, many low-wage service-based industries, such as leisure and hospitality, retail trade, transportation, public utilities, and tourism and entertainment, contracted considerably. However, some of these industries, such as hospitality and entertainment, have recovered as coronavirus-related restrictions have been removed. In contrast, others, such as retail and transportation, have lagged in their recoveries. Lodging real estate values have recovered and are now above pre-pandemic values; however, retail, mall, office and strip center values are still well below pre-pandemic values. This implies that investors believe that many headwinds facing the retail and office sectors, such as e-commerce and working from home, will permanently lower demand for these property types. 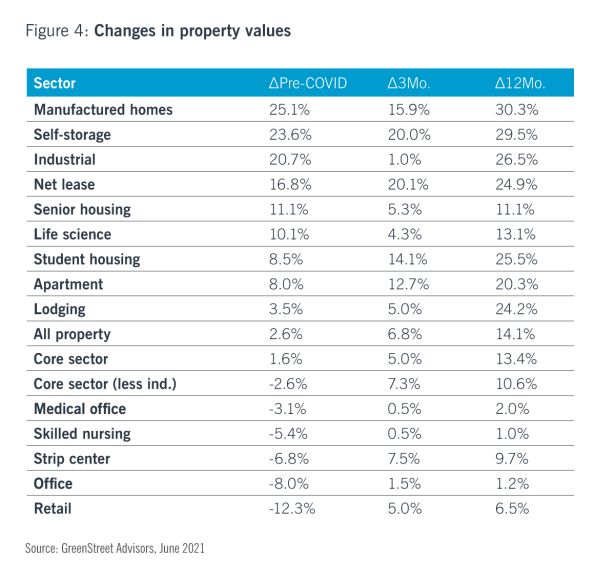 Exposure to retail trade and low-wage office-based employment will disproportionately impact markets that cannot support transitioning these workers to growing industries that rely on low-wage employment, such as logistics, storage and residential construction. In particular, markets such as Raleigh, Riverside and Memphis are likely to maintain their proportions of low-wage employees due to the significant concentration of logistics employment or the significant inward migration into those markets. However, markets such as Washington D.C., New York and San Francisco are likely to lose low-wage workers, as those markets have seen residential outmigration and are too expensive to serve as logistical hubs (relative to markets such as Baltimore, Northern New Jersey and Oakland).Source: GreenStreet Advisors

The benefit of being a low-cost alternative

Markets with a relatively low cost of living, such as Charlotte, San Antonio, Sacramento and Detroit, have gained the highest share of high-income employment since the pandemic began. These markets have arguably gained this employment, while nearby higher-cost markets, such as Atlanta, Dallas, San Francisco and Chicago, have substantially lost high-income workers. 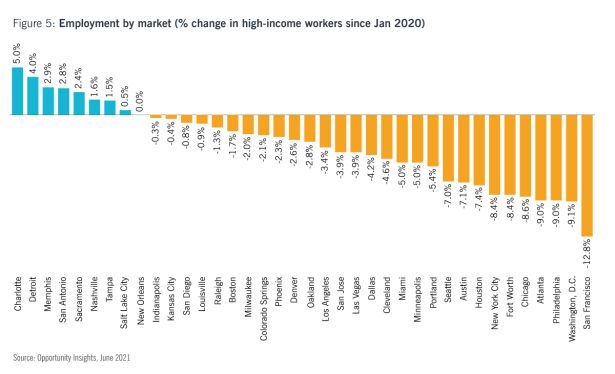 In addition, the suburbs have been quietly growing in population over the last few years, primarily driven by older millennials, who have aged into their household formation years and are seeking additional space for their families. According to the National Association of Realtors (NAR), 53 percent of homes purchased by residents ages 30 to 39 last year were located in suburban locations. The leading factor that led to moving was a life change (addition to family, marriage, etc.). The coronavirus has accelerated suburban migration in all regions, as workers have felt less tied to city centers with a work-from-home lifestyle that is likely to continue in some capacity post-pandemic. For example, the suburban net migration rate in the Nashville metropolitan area was two times that of the urban area in 2015, but four times as fast as the urban area in 2020. In the Boston metro area, the relative growth of the suburbs increased from one time that of the urban area in 2015 to two times last year. In fact, across most metropolitan areas last year, net migration rates were stronger in suburban areas than in urban areas. We expect this trend to continue as millennials form households and employers embrace a more flexible approach to work. 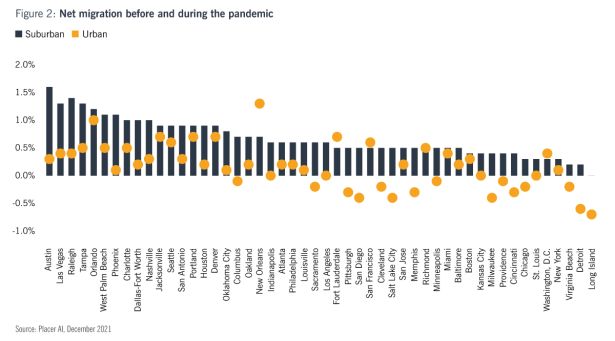 One type of market that could be a key beneficiary of the urban-to-suburban migration are markets composed of suburban areas, such as Long Island, Northern New Jersey, Orange County, Inland Empire, Oakland and San Jose. For example, in 2020, the largest beneficiaries of out-migration from New York City were Long Island and Fairfield (CT) and the beneficiaries for San Francisco were and Oakland and San Jose.

The coronavirus pandemic has led to permanent behavioral changes, which have caused workers, firms and local governments to reassess the locations that could provide a better quality of life and higher productivity in the post-coronavirus world. Real estate investors should take note of these behavioral changes. Cities are far from uniform, and we show that opportunities for real estate markets vary widely across the country.

In the short term, virus control-related factors will remain relevant. Of particular note are the following: 1) the ability of vaccines to remain efficacious against new variants, 2) differences in government policy towards controlling the pandemic and 3) the ability of digital infrastructure to stay stable despite potential threats (i.e., cybersecurity, enterprise risk). However, over the longer term, we argue that the U.S. will chart distinctive paths into the more digital post-coronavirus world due to different realities in terms of geography, economic structure and demographics.