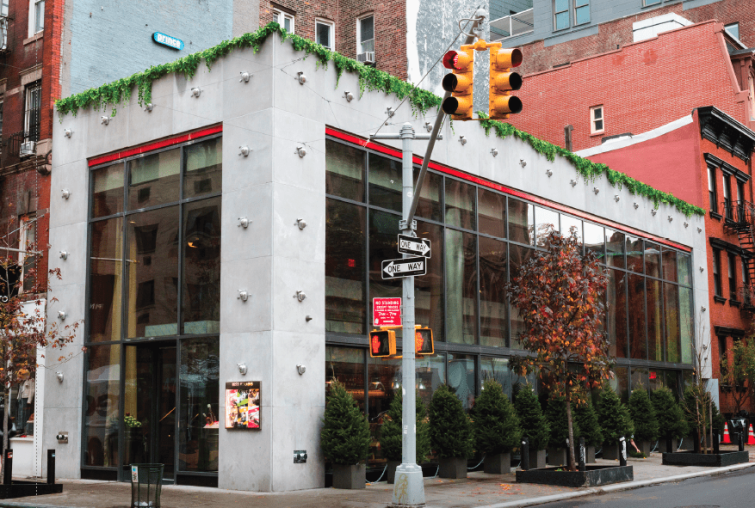 Sushi eatery Momoya, which has outposts in Chelsea and on the Upper West Side, is subleasing an entire Philippe Starck-designed building in Nolita for a new concept, Commercial Observer has learned.

Momoya signed a 13-year deal to occupy the two-story, 4,400-square-foot freestanding restaurant structure at 47 Prince Street at the corner of Mulberry Street, according to Steve Rappaport, senior managing director at Sinvin Real Estate, who represented the tenant along with Sinvin principal Christopher Owles.

The new Japanese place will be called Momoya SoHo, said KwangHo Lee, the restaurant owner. It will have a “modern” and “elegant” interior design, he said. While his other outposts are “contemporary,” he noted, “this is another level.”

The food and beverage options will also be more upscale with Momoya SoHo offering extensive collections of sake and wines. In addition, there will be cocktails made only with sake created by world-renowned master alchemist Alex Ott.

The inside of the building, owned by William Gottlieb Real Estate, was originally designed in 2014 for Miss Paradis, the sub-landlord. Miss Paradis was only open for a year and a half, according to David Baker, president of Baker New York, who along with colleague Charlotte Sardet represented Miss Paradis in the deal with Momoya. The asking rent was $262 per square foot based on the 1,907 square feet at grade, Baker said.

“Momoya was thrilled to find such a prominent modern building in the heart of Nolita,” Rappaport said. “It fits in perfectly with the new concept they will be rolling out.”

Momoya SoHo is slated to open in December. This will be its third outpost, joining locations at 185 Seventh Avenue in Chelsea and at 427 Amsterdam Avenue on the Upper West Side.

Momoya was on Eater New York’s June list of New York City’s 31 top sushi restaurants and Ben Affleck frequented it in 2017, as the New York Post reported at the time.

“The premises were licensed for wine and beer sales only, so a Japanese concept was the perfect fit for the design of the building and the location,” Baker said.