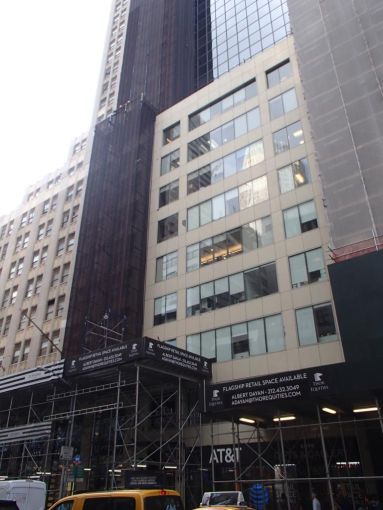 SL Green Realty Corp. has sold 590 Fifth Avenue a year after it acquired the property from Thor Equities.

The family behind diamond ring designer Effy Jewelry bought the 19-story Midtown office and retail building from SL Green for $103 million, according to SL Green and a source with knowledge of the deal.

“Closing on the sale of 590 Fifth Avenue at a price of $1,000 per square foot demonstrates the continued demand for well-located New York City office and retail properties,” Harrison Sitomer, a senior vice president at SL Green, said in a statement. “This profitable transaction is the latest step in the successful execution of our 2021 business plan as we remain on track to meet or exceed our stated goals for the year.”

Albert Sultan and Morris Sabbagh of KSR represented the buyer in the sale.

The 100,000-square-foot building between West 47th and West 48th streets has retail on the ground, which KSR leased to a short-term gift shop prior to the sale, Sultan said.

SL Green took over control of the property in October 2020 after a Uniform Commercial Code foreclosure sale. Previous owner Thor had defaulted on SL Green’s $24 million mezzanine loan on the building.

Effy Jewelry, owned by the Hematian family, owns several properties in the area, most recently picking up 145 West 45th Street from Isaac Chetrit for $92 million in 2019, The Real Deal reported.

“The sale of 590 Fifth Avenue, which was completed in under two weeks, represents the return of the investment sales market to pre-pandemic levels,” Sultan said in a statement. “KSR identified the asset and the buyer was attracted to the prime Fifth Avenue location, and both sides worked expeditiously to solidify the transaction.”

Representatives for Effy Jewelry did not immediately respond to a request for comment.