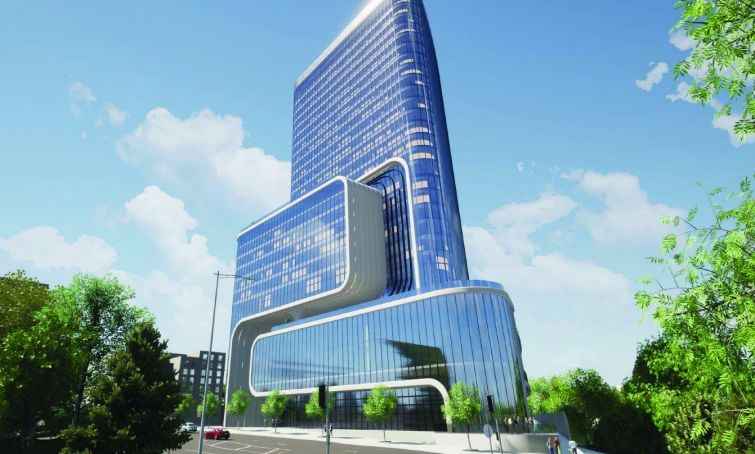 A rendering of Eastern Emerald, a planned 25-story hotel-condo project near LaGuardia Airport that will be highly energy efficient and include upscale finishes and amenities. Image: SASI Studio 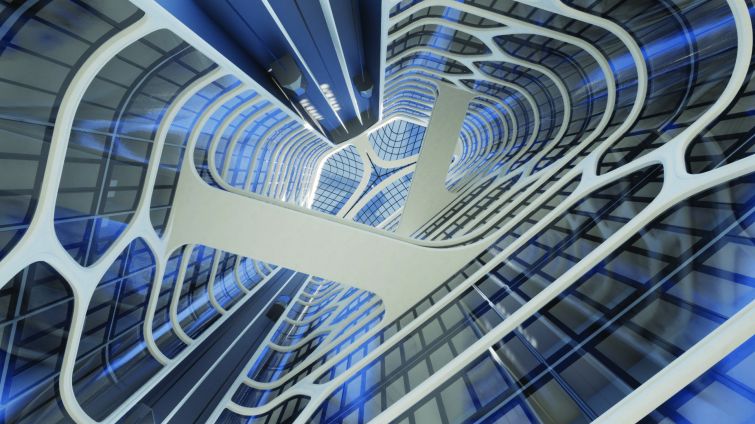 A massive internal atrium will stretch from the ground floor to the 25th. Image: SASI Studio 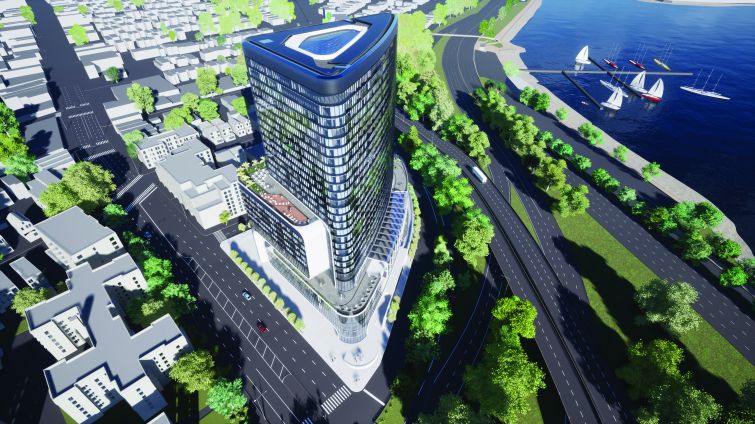 When developer Richard Xia purchased a development site near Flushing Meadows Corona Park in Corona, Queens, he decided that he wanted to build a high-end hotel that would stand out from the slew of lodging options near LaGuardia Airport.

So he and his firm, Fleet Financial Group, hired London-based SASI Studio — an architecture firm run by two alumni of Zaha Hadid Architects — to design a 25-story, triangular building with two levels of setbacks and a massive internal atrium that runs from the ground floor to the roof. Dubbed “Eastern Emerald,” the 350,000-square-foot structure will hold 256 hotel rooms and 196 condominium units on a massive, block-long property at 112-51 Northern Boulevard, overlooking Flushing Bay and Citi Field. Construction started this month and will be complete in three to four years.

Xia wants the development to be net zero from a carbon emissions perspective, and is employing a host of environmentally friendly measures to reduce energy usage in the building, which will be encased in a transparent glass curtain wall. The facade will be made of photovoltaic glass, which converts the sun’s light into electricity, much like traditional solar panels. The curtain wall will be composed of five layers of glazing, in an effort to make the exterior more airtight and energy efficient. The heating and cooling system will rely on geothermal energy and variable refrigerant flow (VRF), which can help reduce energy costs by 66 percent.

Windows will be soundproofed enough to filter out traffic, which is important because the hotel sits next to a knotted interchange of two major elevated highways, Northern Boulevard and Grand Central Parkway. LaGuardia Airport is also only two miles down the road.

The project will include a conference center, ballroom, theater and performing arts center with music and photography studios. Two setbacks with large outdoor spaces help divide the building into three sections: community facilities, that conference center and retail on the first few floors, followed by the hotel, and, finally, the condo portion. The upper of the two large, landscaped outdoor terraces will have a pool. The rooms will be equipped with voice control technology, rather than a remote, so guests will be able to turn off the lights, turn on the TV, order room service, and ask for more towels simply by speaking.

Xia explained that he wants to attract business travelers and other people who might be looking for a more high-end hotel experience, rather than just a place to stay near LaGuardia.

“We’re taking extra effort to make sure that the hotel doesn’t just capture the demand from the airport,” he said. “When everybody gets the vaccine, there are going to be more tourists coming back to New York. Every year for the U.S. Open, they are looking for a nice hotel with full amenity space, so the guests can stay there.”

He hopes the more luxurious feel of the property — along with its advanced security system — will help it survive in a very tough market for hotels. Although the city’s hotel market has recovered somewhat from the worst of the pandemic, many hotels, particularly in the outer boroughs, continue to struggle with empty rooms. Last month, the city’s hotel occupancy rate was at 67 percent, compared to 89 percent two years ago, according to research firm STR.

“The overall design of the building will have a high-end feeling,” he said. “Every room will have an iPad. They can scan if they want to buy items in the hotel room” like furniture or home goods, “so we can capture showroom revenue. We are targeting a different group, which can hopefully help us to survive.”