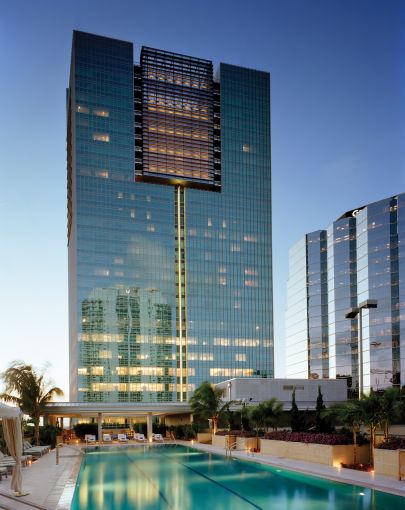 The 201-key hotel, located at the base of the 36-story Brickell Arch Tower at 1395 Brickell Avenue, will be rebranded the Hotel AKA Brickell.

The sellers were Mast Capital and private equity firm Angelo, Gordon & Co., which acquired the hotel for $72.5 million in 2017.

EAHG was formed in early 2021 to acquire underperforming hotels in gateway cities and reposition them, and this is the third deal it’s closed on so far.

“We’re all about choosing markets that are major markets that will recover over the course of time, in the two major segments that we look for, corporate travel and tourism,” Russ Urban, CEO of EAHG, told Commercial Observer.

The Conrad, managed by Hilton, fit into EAHG’s strategy. “It’s an amazing hotel that’s been poorly managed and poorly branded for years,” said Urban. “Hilton, while a strong international brand … it’s way overrepresented in that market. There are over 5,000 Hilton rooms in that marketplace and the Conrad was swallowed in all that.”

EAHG plans to invest $11 million into the hotel and introduce new food-and-beverage opportunities in the lobby and on the rooftop, which is currently occupied by tennis courts.

“What we’re trying to do is create a sense of home in hotels,” said Larry Korman, president of AKA. “There’s just this opportunity to buy these traditional hotels and reimagine them differently, to have different places and spaces on each floor that feel like home.”

The group is also speaking with architect Gene Kohn of Kohn Pedersen Fox, whose firm designed the building, and interior designer Michael Gabellini, on updating some of the design, said Korman. Currently, the layout is a bit disjointed. “We’re using them to reconnect all the spaces in a fluid manner,” Korman said.

While some beach and resort hotels in South Florida have fully rebounded, the hospitality industry is still hurting from the lack of business and international travel — both of which are just beginning to return.

“The corporate market has just started to come back, and there’s a lot of influx of expanding and new companies to Brickell, from New York and overseas and elsewhere. That’s just happening now; the second area we’re excited about is the return of the international traveler,” said Urban.

EAHG has its sights on another Miami property on the beach, though that deal is still under negotiation. It’s also actively looking for deals in New York, Washington, D.C., the West Coast and London.