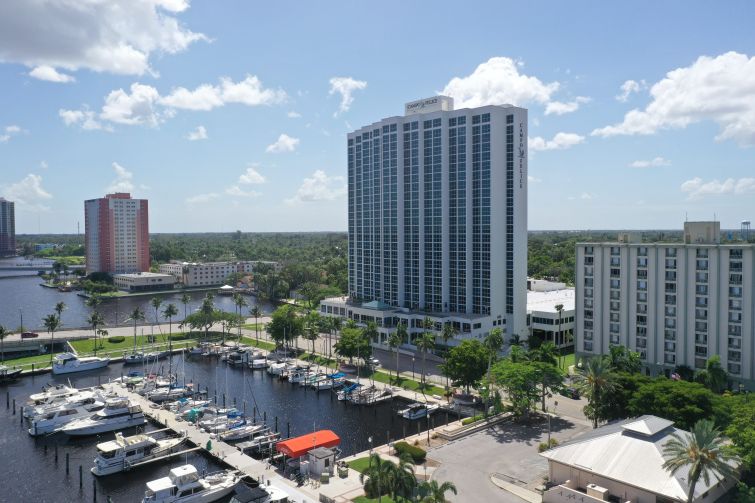 Ladder’s four-year, floating-rate acquisition loan allowed Westside to buy Campo Felice, a 24-story residential tower on the banks of the Caloosahatchee River near Downtown Fort Myers, for around $55 million from the previous lender on the asset in an off-market deal. The fresh acquisition financing was extended at a robust underwritten loan-to-value of 78 percent.

The purchase comes just two weeks after Westside made its first-ever splash in Fort Myers with its $71 million buy of the 32-story Oasis Grand II, which is located less than two miles from Campo Felice in the city’s downtown area.

Berkadia’s Charles Foschini and Christopher Apone — out of the firm’s Miami office — were responsible for arranging the full-term, interest-only financing for Campo Felice on behalf of the buyer. The pair had also worked with Westside in securing $58.7 million in acquisition financing for Oasis Grand II.

“The exceptional location of Campo is undeniable, and it didn’t take long to find a lender who agreed with the Westside’s future vision for the property,” Foschini said. “With a strong, capable operator and the backing of a well-crafted loan, this property will increase in value through an expertly executed transformation, benefiting both residents and investors alike.”

Campo Felice is situated on more than 3.2 acres at 2500 Edwards Drive in Fort Myers. It was originally erected in the late 1980s as a Sheraton Hotel, and it has most recently served as an independent-living, senior housing property, with 323 one- and two-bedroom apartment units.

Westside Capital will immediately launch a campaign to upgrade the property, while transitioning it from being primarily used for senior housing to a market-rate, multifamily high-rise, according to information from Berkadia and Westside Capital founder and President Jakub Hejl.

“Campo Felice is a landmark property with spectacular amenities in the beating heart of Downtown Fort Myers, which unfortunately never achieved its full potential,” Hejl said. “[The property will] immediately benefit from much-needed capital investment, operational expertise and professional management.

“Our first objective is to work closely with current residents to ensure that their needs are met,” Hejl added. “We are focused on making sure the transition of ownership yields only positive experiences for the senior residents currently occupying the building. At the same time, we’re also looking forward to working with our neighbors, nearby businesses and local officials, as well to ensure this property becomes a true asset to the broader Fort Myers community now and well into the future.”

The previous owner, The MacFarlane Group, acquired the property in 2015 and then moved to redevelop it into a luxury, senior housing project. The property has four food and beverage outlets, a swimming pool with a jet spa, a 2,200-square-foot fitness center, a 49-seat movie theater, a salon, a dog park and a ballroom, as well as more than 520 parking spaces.

In the summer of 2020, following the depths of the pandemic, The MacFarlane Group had run into issues with default on an existing mortgage on Campo Felice that had been provided by AllianceBernstein in 2018. Newmark was marketing for sale about $63.7 million in existing indebtedness in late August 2020, which had matured the previous month.

Berkadia fashioned this transaction for Westside Capital as an off-market “special situation” deal, seemingly relieving AllianceBernstein from ownership of what had been a troubled asset amid the pandemic.

A representative of Ladder Capital did not respond to a request for comment.

This story was updated to further clarify that Westside Capital Group bought the asset from previous lender AllianceBernstein in a REO sale.