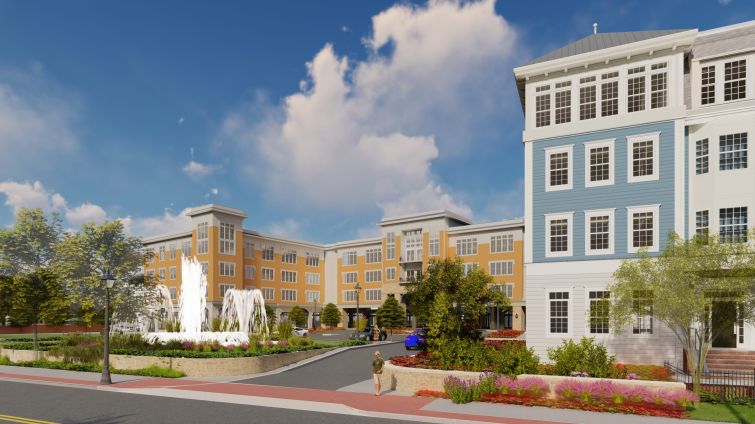 The financing package included a $113 million, four-year, floating-rate construction loan from Truist Financial Corporation (formerly SunTrust Bank) and Santander Bank for the ground-up buildout of the project, as well as $55 million in joint venture equity from “institutional investors advised by J.P. Morgan Asset Management,” according to JLL, which arranged the financing on behalf of Tritec.

It was not immediately clear which firms were brought in as joint venture partners in the deal, and JLL declined to comment on that information.

Officials at Tritec were not available to respond to an inquiry seeking more information on its new joint venture partners.

“This project is a unique opportunity to partner with one of Long Island’s most prolific developers in a dynamic residential development with scale in one of the nation’s highest barrier-to-entry markets,” Scandalios said. “There is growing demand for Class A multi-housing product in Long Island from young professionals and new families seeking a transition to a more suburban lifestyle, as well as from empty nesters downsizing from large single-family homes to luxurious rental properties.”

Bay Shore Residences will sit on more than 10 acres at 1700 Union Boulevard — on the former site of a Touro College campus — in Bay Shore, a hamlet located within the town of Islip on the southern coast of Long Island.

The wood-frame residential project will be built in two phases and, in total, will comprise 334 market-rate units and 84 affordable, workforce housing apartments, as well as nearly 1,700 square feet of retail for a food-and-beverage outlet.

In September 2020, Suffolk County officially approved a zoning change for the site that would allow for the project to move forward. And several months later, in March, Tritec received $2.5 million from the county, via an affordable and workforce housing program through its Department of Economic Development and Planning, to help pay for the affordable housing units that will be included in the development.

“This is an exciting opportunity to integrate a new mixed-use development in an area hungry for walkable transit-oriented communities,” Tritec Principal Bob Coughlan said, adding that his firm is “proud to be doing it with a group of high-caliber financial partners, including the team at JLL.”

The property will include 17,500 square feet of interior amenity space, including a fitness center, multiple clubrooms and lounges, a game room or billiards room, a coworking center, and a dog washing station. There will also be more than 30,000 square feet of exterior amenities for residents that will include a rooftop deck, a pool, barbecue and picnic stations, and a number of fire pits that will be situated among landscaped courtyard areas. About 630 parking spaces will be on-site as well, according to Tritec’s website.

Bay Shore Residences is a couple of blocks away from the South Shore University Hospital, as well as the Bay Shore stop along the Long Island Rail Road, which provides for about an hour-long trip into Manhattan’s New York Penn Station.

Representatives for both Truist and Santander did not respond to an inquiry prior to publication.