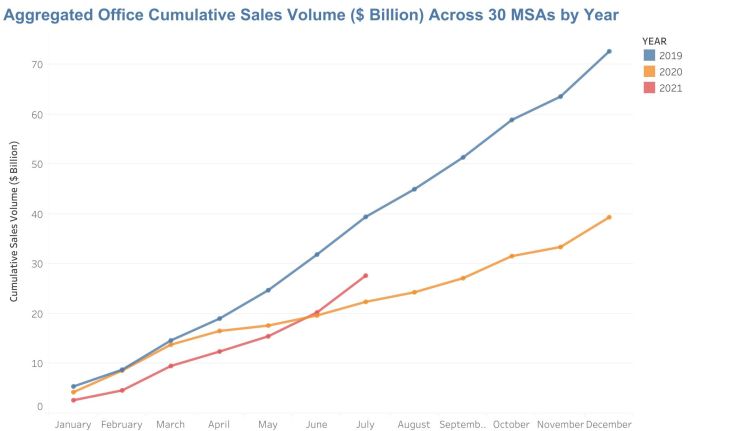 Office transaction volume is still down from 2019 levels but it's recovered significantly from the height of the pandemic in 2020. Image: Reonomy

The investment sales market for office buildings continues to struggle nationwide, with office sales volume in dollars still tracking 45 percent lower than 2019 numbers, according to new data from Reonomy.

Across the top 30 metropolitan markets in the U.S., the dollar volume of transactions has declined from $39.5 billion in July 2019 to $28 billion in July.

Meanwhile, D.C.’s office sales volume has decreased more than any of the other 29 cities that Reonomy tracks. The District has seen a 28 percent drop in office deals in the second quarter compared to the same time in 2019.

Seattle and San Francisco experienced similar drops — 23 and 28 percent, respectively — in the volume of office sales from the second quarter of 2019.

However, every single one of the markets that Reonomy tracks has rebounded from the height of the pandemic a year ago.

L.A. had the biggest bounce back, with a 104 percent increase in office building transactions from the second quarter of 2020, followed by Miami with a 101 percent increase. Boston saw a 92 percent year-over-year increase, followed by Chicago (89 percent), Austin (87 percent), San Francisco (78 percent), and finally New York, with a 68 percent jump in office deals from the second quarter of 2020.