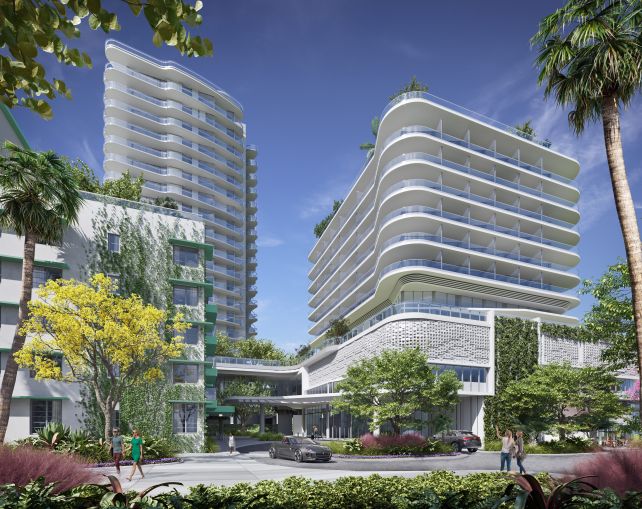 The City of Miami Beach Historic Preservation Board approved plans for the project on Monday, in the last public vote on the issue. Located between 74th and 75th Streets along famed Collins Avenue, the development will include a 20-story, 75-unit residential building with retail spaces, a 127-room hotel and a 5-acre public park.

The project, proposed by developer Sandor Scher of Ocean Terrace Holdings, has long been opposed by community members, primarily because of the site’s historic significance. Originally, Scher and his partner, Alex Blavatnik, wanted to demolish 11 historically protected, Art Deco-style properties — most of which sat vacant — and construct a condo tower, the Miami Herald reported.

Local residents voted to reject those plans in 2015, and developers and city commissioners reached an agreement three years later. Officials granted permits for the condo building to reach up to 235 feet high, almost double what zoning laws allowed. In return, Scher and Blavatnik would add a public park to the development and restore some of the historic structures.

One historic property has already been demolished and another is set to come down. Eight historic buildings will have their facades restored, while two additional properties, the Broadmore and Ocean Surf hotels, will be fully restored, said a representative for Ocean Terrace Holdings. Both buildings will be incorporated and attached to the Ocean Terrace’s new hotel development.

The project “will restore the street-level historic architecture, transform Ocean Terrace into a lushly-landscaped oasis and give new life to this cherished beachfront,” Scher said in prepared remarks.

Ocean Terrace Holdings will seek permits to begin construction with the aim of first completing the park — located between 73rd and 75th Streets on Ocean Terrace, which will cost an estimated $15 million — by 2022.