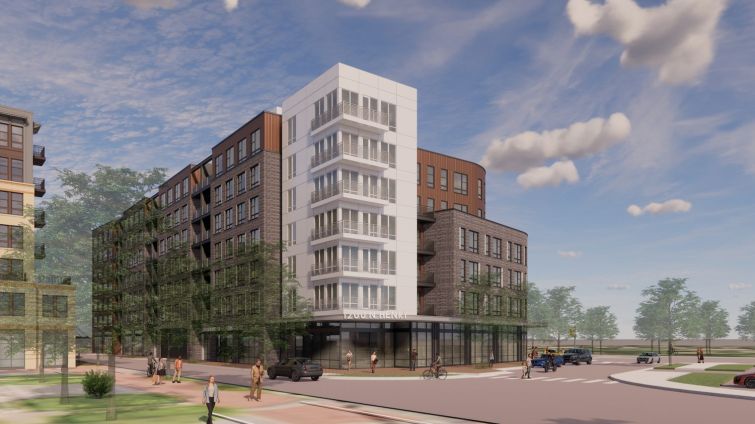 NOVO Properties has received $43 million in construction financing for the development of The Grayson, a 119-unit multifamily project located in Alexandria, Va., Commercial Observer has learned.

Avison Young facilitated the loan with EagleBank, which represented 60 percent of the total cost of the project. The terms of the loan were not revealed.

“This is a Class A product, with about 13 percent of the 119 apartments for affordable housing,” Ryan Riel, chief real estate lending officer at EagleBank, told Commercial Observer. “Data shows leading into this that vacancy rates were relatively low for multifamily product in the submarket. Competition has been increasing over recent years, but as new projects delivered, the vacancy rates and rental rates continue to suggest supply and demand were not at equilibrium and more demand was there.”

NOVO originally acquired the site in July 2019. Riel noted that after numerous attempts, this was the first opportunity for EagleBank to execute and close on a construction loan for the development company.

“We’re giving them enough time to build and stabilize the project, and then the intention is for them to take it to a more permanent lender,” Riel said. “Historically, EagleBank has not provided permanent debt on residential property. At this point in time, we will be bidders on that permanent debt when it’s ready for it.”

Named after Sarah Gray, a prominent African American educator in Alexandria during the late 1800s, The Grayson is located on Route 1 within blocks of the Braddock Road Metro Station, and within close proximity to Amazon’s new HQ2 headquarters at National Landing and Virginia Tech’s new campus at Potomac Yards.

“Old Town is a highly in-demand multifamily market with a relatively limited pipeline of future development,” Jon Goldstein, principal at Avison Young, told CO. “The Grayson is in a dynamic location. Renters will have quick and convenient access to some of the area’s biggest employment centers.”

The project is expected to break ground in October with an estimated completion date for fall 2023.

Avison Young’s team was led by Goldstein, Wes Boatwright and Mike Yavinsky, all principals in the firm’s Washington, D.C., office.