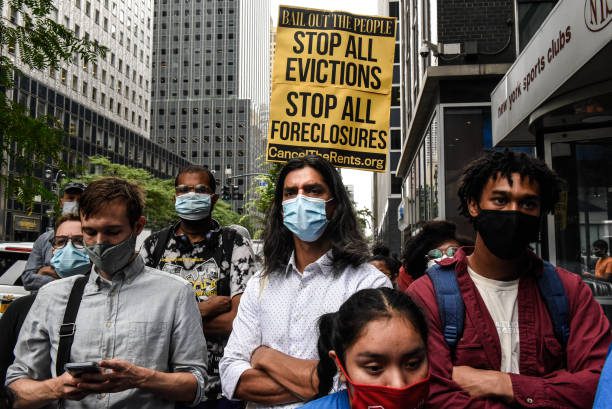 The Rent Stabilization Association (RSA) and a group of small landlords have filed a lawsuit in federal court to block the state’s new eviction moratorium, as they attempted to do with the previous version of the legislation.

The state legislature recently reworked the pandemic eviction ban in the wake of a new U.S. Supreme Court ruling that struck down a significant part of New York’s prior anti-eviction legislation. Under the old policy, tenants who were facing eviction cases could submit a filing to their landlords that attested they could not pay their rent because of income loss related to the pandemic. That allowed them, in most cases, to avoid a housing court hearing.

Once the Supreme Court ruled that this measure was unconstitutional and denied landlords due process in court, New York state legislators went back to the drawing board and crafted a new eviction moratorium. The updated version — which expires on Jan. 15, 2022 — allows landlords to contest tenants’ hardship filings in housing court.

RSA’s new court filing argued that the new eviction moratorium is essentially a continuation of the old, unconstitutional one.

“The latest extension of the residential moratorium law continues every single one of these deeply problematic features,” the organization’s lawyer wrote in the federal appellate court filing. “The central structure and mechanism is still an unsworn hardship declaration in which the tenant merely checks a box — without specifying what kind or type of hardship he or she claims, and without providing any documentation of the hardship — thereby blocking the filing or prosecution of eviction lawsuits and the issuance of eviction warrants.”

The filing argued that the new moratorium “continues to bar the courthouse doors to property owners by limiting them to initiating a court action only if the landlord first is able to swear ‘under penalty of perjury’” — as contrasted with the tenant’s unsworn hardship declaration — and that “the petitioner believes in good faith that the hardship certified in the hardship declaration does not exist.”

The Supreme Court also recently struck down the Centers for Disease Control and Prevention‘s national eviction moratorium, which opens the door to a new flood of evictions in states that don’t have bans in place.

RSA’s filing is a continuation of their previous lawsuit, and the plaintiffs includes a group of small landlords — Pantelis Chrysafis, Betty Cohen, Brandie Lacasse, Mudan Shi and Feng Zhou — who argue that they have been harmed by the inability to litigate eviction cases against tenants during the pandemic.

“No matter the spin by state lawmakers and Gov. Hochul, this is a reenactment of the previous law — completely disregarding last month’s U.S. Supreme Court decision and ignoring key elements of our complaint,” RSA President Joseph Strasburg said in a statement. “It continues the vague COVID hardship declaration, which enables renters who never lost their jobs or skipped a paycheck to continue using the eviction ban as a moratorium on paying rent.”