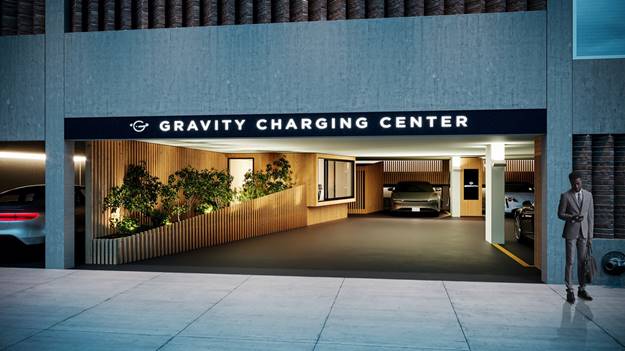 Gravity, an electric vehicle (EV) fleet and infrastructure proptech startup, is opening what it bills as Manhattan’s first parking garage site for fast electric vehicle charging, part of what the company hopes is the start of a major EV rollout in New York City.

Scheduled to open this fall in Manhattan Plaza at 401 West 42nd Street, the facility will offer 29 street-level charging ports for EV fleets and private electric vehicles, while also serving as a charging hub for Gravity’s new fleet of all-electric yellow taxis. The Related Companies-owned Manhattan Plaza is the first in a series of new partnerships with major commercial and residential owners, according to a statement from Gravity.

Vehicles usually take less than an hour to charge, allowing more than 600 cars a day to be charged at the 24-hour facility, said Moshe Cohen, CEO of Gravity. Users only pay for charging their vehicles, while the actual parking space is free. Charging is priced at the cost of providing the electricity without markup.

“Frankly, ConEd deserves a lot of credit,” Cohen said. “A lot of ConEd’s programs, which are critical to these buildouts, require people to not get charged twice for charging and parking.”

EV owners can use touchscreens to adjust and monitor their vehicle’s charging while they wait, or they can leave their vehicles with 24/7 attendants, allowing them the option to have their vehicle parked in the connected Manhattan Plaza parking garage after charging. Gravity’s charging spaces are all open to the public.

Gravity plans to rapidly scale its business to dozens of public parking garages across the city, including a portfolio of new designs that can adapt to even the most space-constrained site, Cohen said.

“What we’re doing is very much focused on full portfolios and scale,” Cohen said. “I’ve been spending a lot of my time literally going block by block, site by site, looking at all the places where cars are parked,” in Manhattan, Brooklyn and Queens. “Every possible site where we thought there could potentially be installations, we engage the parking operator and the owner and work to electrify it. I think, ultimately, there’ll be 100 [sites].

“They’re not all going to be like [Manhattan Plaza], which is a pretty special showcase, because it’s essentially a self-park off the street level in the middle of Midtown. That just doesn’t exist in current construction. We’re basically doing all the ones we can do by retrofitting existing structures. I think you’ll start to see design specifically around this in the near future. In Manhattan, we’re expecting within the next six months or so about five to 10 of these sites where you could have this true fast charging.”