Several South Florida gambling venues are encouraging, or anticipating a wave of development 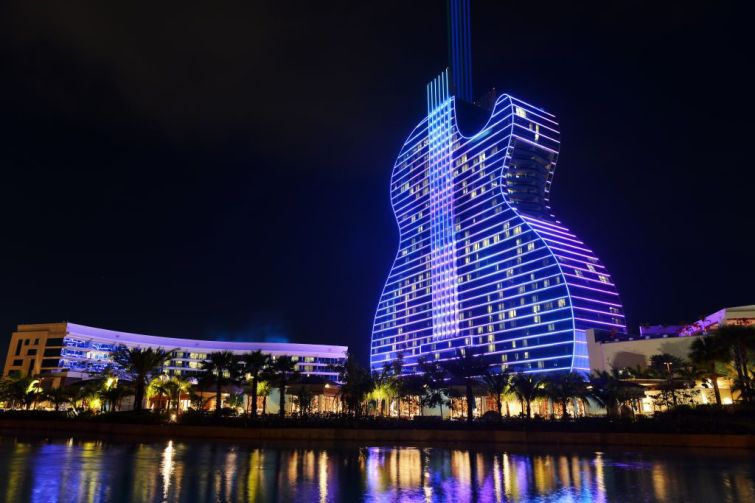 A 450-foot hotel in the shape of an electric guitar towers over western Broward County. The 638-room Guitar Hotel is the glitzy centerpiece of a $1.5 billion expansion completed in 2019 at the Seminole Hard Rock Hotel & Casino.

Nearby, real estate projects are sprouting in the long shadow of the Guitar Hotel as developers bet on proximity to the Seminole Hard Rock, which fronts busy U.S. Route 441 in Hollywood, Fla.

“That whole 441 Corridor is ripe for expansion,” said South Florida developer Lon Tabatchnick, who is co-developing 441 Roc, a mixed-use project with a Wendy’s, a Wawa, and rental apartments. “The Seminole Hard Rock is the whole reason we’re invested on 441,” Tabatchnick says. “They have 5,000 employees. I only need to fill 176 apartments.”

The Guitar Hotel is not the only South Florida gambling venue that’s encouraging a wave of development, or anticipating one. Several parimutuel permit holders in Broward and Miami-Dade counties are planning developments around their horse racing properties, which could spur peripheral real estate projects.

But developing near a casino is hardly a sure bet.

Veteran South Florida developer Allen Morris said development on the grounds of some parimutuels may make sense, but investing in income-producing properties around them is risky. “Casinos are intentionally designed to be internal cash generators, not external cash generators,” Morris said. “We saw it in places like Atlantic City, where people opened up businesses all around the casinos, and they all went bankrupt, because the casinos are designed to keep people inside.”

Gambling is already a draw in Florida, and Gov. Ron DeSantis is taking it even further. DeSantis negotiated, and state legislators approved, a 30-year compact with the Seminole Tribe that allows for the development of three more casinos in the vicinity of the Seminole Hard Rock. The compact also legalizes sports betting at Seminole casinos statewide and at parimutuels that provide such betting through the Seminole Tribe. In exchange, the Seminole Tribe will pay the state government at least $2.5 billion in the first five years of the 30-year term of the compact.

The deal was approved by U.S. Department of the Interior in early August, but faces some legal challenges.

The legislation follows previous efforts to expand Florida’s gambling options. Most gambling venues in the state are state-licensed parimutuel properties, where customers once could bet only on horse races, dog races, or jai alai games. But, thanks to state legislation and subsequent local-referendum votes, parimutuels started offering slot machines in Broward County in 2006 and in Miami-Dade County in 2009.

Since then, slot machines have become cash cows for horse tracks and other parimutuels, offsetting a steady statewide slide in parimutuel wagering. South Florida’s eight parimutuels together collected $277 million of net revenues from slot machines — or almost $35 million each, on average — after paying winning wagers and covering other expenses in the 12 months ended June 30, 2020, according to the Florida Division of Pari-Mutuel Wagering. Tallahassee takes a cut, of course: During the same 12 months, the state government collected a $157 million slice of slot revenues at South Florida parimutuels.

Betting on slot machines is just one of many ways to spend money at Gulfstream Park, a horse track and casino in Hallandale Beach, Fla. The owner has done more than any other South Florida parimutuel owner to develop commercial space around gambling property.

In November 2006, Gulfstream Park became the first of the eight parimutuels in South Florida to offer slot machines. About four years later, Gulfstream’s owner, Canada-based Stronach Group, opened The Village at Gulfstream Park, a cluster of retail stores and restaurants next to the track and casino. It now has municipal approval to build upon that retail space by adding hotels, condos and apartment buildings, said Ken Krasnow, vice chairman of institutional investor services in Florida for brokerage firm Colliers International.

Colliers worked with Stronach Group several years ago on a feasibility study to determine how many residential units and hotel rooms the company should develop, and on redesigning the retail portion. “Some of it works well. Some of it has been struggling,” Krasnow says of the retail. “It’s more of a design flaw than a problem with the underlying demographics.” Gulfstream is located just north of wealthy coastal communities, including Aventura, Sunny Isles Beach and Golden Beach. (Stronach Group did not respond to requests for an interview.)

The idea is to leverage the popularity of the racetrack and casino to create a community around it, said Krasnow. But further development at Gulfstream Park may not proceed without a resolution of disputes among Stronach family members, who have sued each other over control of the family business. “They’ve got bigger issues to work out,” Krasnow said, “like who’s in charge and who’s going to make those kinds of decisions.”

In Broward County, Las Vegas-based Caesars Entertainment plans to redevelop Isle Casino Pompano Park, a 232-acre parimutuel property on the west side of Pompano Beach. About a year ago, Caesars won city approval of a mixed-use master plan to build as much as 1.5 million square feet of industrial space and 1.35 million square feet of office space next to Isle Casino’s multi-level casino. Other maximum entitlements in the master plan include 950 hotel rooms and 4,100 residential units.

With about 1,400 slot machines that generated $54 million of net revenue in the 12 months ending in June 2020, Isle Casino is one of the most profitable in slot-machine venues in South Florida. The property has a harness horse racing track, but has said that it’s 2021 season was its last.

In Miami-Dade County, a new public charter school and 343 rental apartments are planned as the first phase of a development around the casino and horse racing track at Hialeah Park, a largely vacant, 200-acre property in the middle of the county, about six miles north of Miami International Airport. Hialeah Park’s owner, Bal Bay Realty, is leading the educational and residential real estate projects in partnership with Miami Lakes-based developer Prestige Companies and Hialeah Gardens-based Mater Academy Inc., which will operate the charter school.

Not all casinos are created equal, though. East of Interstate 95 in Hallandale Beach, a parimutuel called the Big Easy appeals to developers not for what it is but what it might become. Real estate billionaire Jeffrey Soffer acquired the Big Easy in 2018, raising unmet expectations that he somehow would transfer its parimutuel gaming permit to his Fontainebleau Miami Beach hotel.

The Big Easy is “a very big piece of property that most likely, eventually, is going to get redeveloped,” said developer Daniel Chaberman. “Maybe in the medium term, it could become something much bigger than it is right now.” His firm, Grupo Eco, paid a total of $22 million in 2015 and 2018 for land just east of the Big Easy on Federal Highway to develop Atlantic Village, a mixed-use commercial property.

Another developer, Leon Ojalvo, said the current condition of the Big Easy didn’t drive his decision to build an 81-unit apartment complex just north of the casino and a defunct dog racing track surrounded by surface parking. “What it might be in the future was a driving factor,” he said, but it didn’t affect his business plan. “I don’t view it as a positive or a negative. I just view it as a big piece of land that is underutilized.”

Legalization of sports betting, via the state’s newly approved Seminole Compact, could make Florida an even bigger gambling destination. The Havenick family, owners of a Miami parimutuel called Magic City Casino, filed a federal lawsuit, charging that the 30-year compact violates the Indian Gaming Regulatory Act. The suit asks the court to enjoin the launch of sports betting in Florida.

Assuming it survives legal challenges, however, the compact could benefit certain South Florida property owners. Developer Russell Galbut, for example, has planned a mixed-use development in the Edgewater neighborhood, just north of Downtown Miami, that would include a jai alai fronton and a poker room. In approving the development by Galbut’s company, Crescent Heights, Miami city commissioners prohibited other types of gaming there, but allowed sports betting if legalized.

Donald Trump could benefit, too. The compact requires written consent from the Seminole Tribe to open a casino in Miami-Dade or Broward within 15 miles of a Seminole gaming location. This restriction has raised the possibility of a casino opening at the Trump National Doral Miami, a golf resort slightly more than 15 miles south of the Seminole Hard Rock Hotel & Casino in Hollywood.

A casino could revive Trump National Doral, which has struggled financially due to the COVID-19 pandemic and Trump’s controversial presidency.

The risk of direct competition with casino operators hasn’t deterred Sharon Sharaby, one of the developers behind a project to build a kosher hotel directly across U.S. 441 from the Seminole Hard Rock.

Sharaby is planning an October 2022 grand opening for his six-story, 100-room Wyndham Dolce Kosher House Hotel, now under construction. Among other features, the hotel will have a kosher restaurant and a “Sabbath elevator” that automatically stops on every floor, negating the need to operate it. He said the Seminole Hard Rock will complement, not compete with, his lower-priced hotel: “We’re a fraction of the price. So, my guests are going to sleep at my hotel and go gamble at the Hard Rock. I’m not a casino.”

The Seminole Hard Rock is a casino and much more. The hospitality and entertainment complex has 1,271 hotel rooms and 194,000 square feet of gaming space for slot machines, card tables and other betting paraphernalia, plus more than 150,000 square feet of meeting space, a 13.5-acre pool and lagoon area with cabanas, and a 7,000-seat theater that draws such performers as Dave Chappelle, Eric Clapton, Kevin James and Alicia Keys.

Sharaby plans to leverage the allure of the Seminole Hard Rock by developing a second kosher hotel under the Wyndham Grand brand, on a two-acre development site on U.S. 441, just north of the first one. The proximity of the Wyndham Grand and the adjoining condo to the Seminole Hard Rock will appeal to fervent casino fans, Sharaby said. “There are people who look at the casino like the ocean: They want to wake up in front of a casino.”

By Gary Tarnoff and Jeff Mulligan