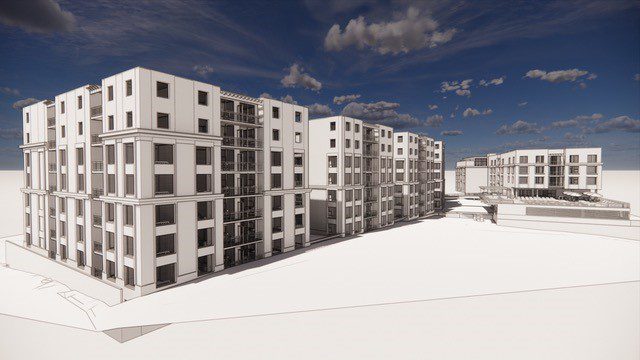 A rendering of the planned development at 1701 East Boulevard in Charlotte. Courtesy: S3 Capital

The loan will facilitate the buildout of a project that will be located at 1701 East Boulevard in the Dilworth area of Charlotte — within a prime area just south of the city’s downtown, bordering the sizable Atrium Health Carolinas Medical Center — and will sport 334 units, along with a 437-space underground parking garage, sources said. The deal closed on July 27.

“Charlotte is one the most dynamic cities in the nation, with extraordinary population growth and development activity,” said S3 Capital co-founder and Principal Joshua Crane. “We anticipate tremendous leasing momentum for this project, which offers a superior-quality tenant experience with abundant amenities and an ideal location.”

East Boulevard Development Company LLC is an entity registered with the state of North Carolina that is controlled by developers Brian Phillips and Jim Gross, according to information filed with North Carolina’s State Department. Gross has a history developing real estate in the area.

In January 2020, the company acquired a handful of parcels spanning 1.8 acres at the corner of East Boulevard and Lombardy Circle for just $7 million, with initial plans that considered four new buildings, including three, eight-story condominium properties and a five-story office asset that would have ground-floor retail space. Those plans also outlined a courtyard area that would sit above a four-level, subterranean parking garage, the Charlotte Business Journal reported at the time, citing Mecklenburg County records.

The 392,000-square-foot project, though, will be built on top of 13 parcels, which were assembled by Jim Gross Development Company, and is expected to wrap up and be delivered to market in the summer of 2023, according to sources with knowledge of the deal.

The property’s location next to the major Atrium medical center provides it access to one of the city’s leading employers, and the asset will also benefit from a variety of shopping that is only a couple blocks away. Nearby, there are three grocery stores — Harris Teeter, The Fresh Market and Food Lion — and a bevy of restaurants.