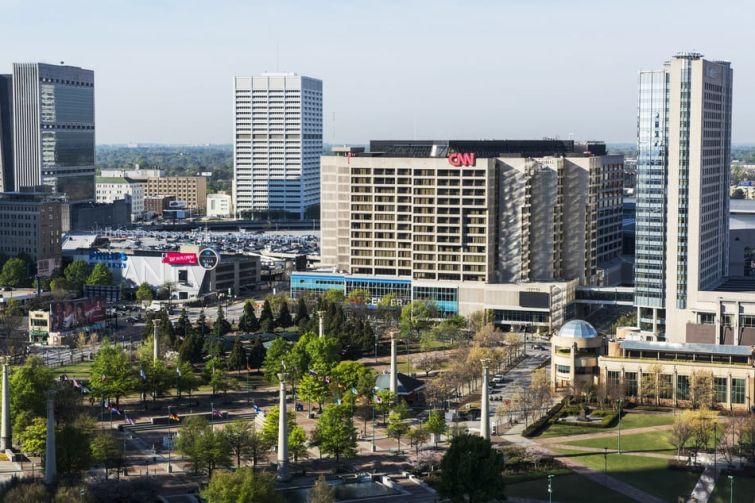 CP Group Acquires One CNN Center in Downtown Atlanta, GA, making one of the country's premier owner-operators and developers of commercial real estate the second-largest office landlord in Georgia jechikson

After trading Miami office towers, CP Group and Rialto Capital Management are back on the prowl, purchasing the massive One CNN Center office building in Downtown Atlanta, Ga.

CNN’s parent company, WarnerMedia, sold the 1.2 million-square-foot property for an undisclosed amount, but will keep a presence at the building.

As CNN centralizes its operations to its Techwood campus located two miles north, the news network will lease back the building from where it shot many of its programs for a “number of years,” according to information from CP Group.

Located at 190 Marietta Street NW, the iconic CNN Center is surrounded by some of Atlanta’s most popular attractions, such as the Mercedes-Benz Stadium, the World of Coca-Cola museum, and the Center for Civil and Human Rights.

“Atlanta is uniquely positioned for success in the coming years… Thanks to corporate relocations and expansions,” CP Group partner Chris Eachus said in prepared remarks.

Down south, in Miami this week, CP Group and Rialto — along with a third partner — bought the 38-story One Biscayne Tower for $225 million; the week before that, CP Group sold its 90 percent stake in the Citigroup Center, one of the largest office buildings in Miami, for $300 million.

Headquartered in Boca Raton, Fla., CP Group — formerly Crocker Partners — is one of the largest office real estate owners in the Southeast and Southwest, the company says. Since its inception in 1986, the company has acquired and managed more than 158 properties, totaling 50 million square feet, worth an estimated $6 billion.

Led by CEO Jeff Krasnoff, real estate investment firm Rialto is based nearby in Miami.

Representatives for CP Group and WarnerMedia declined to divulge the sale price and any mortgage details. A spokesperson for Rialto Capital Management could not be reached for comment.