Should the federal government officially embrace cannabis, it would be a boon for banking and real estate 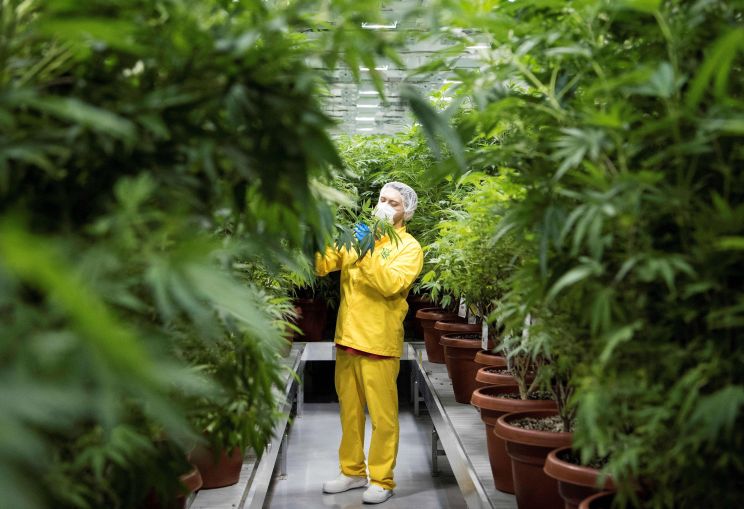 On Wednesday, U.S. Senate Majority Leader Chuck Schumer and Senators Cory Booker and Ron Wyden introduced a draft bill that would decriminalize cannabis at the federal level, a move that would open the floodgates to financing and real estate opportunities. Photo: ROBERT ATANASOVSKI/AFP via Getty Images

In a speech on April 20 — cannabis’ unofficial holiday — and on the heels of his state signing monumental legal recreational cannabis legislation into law, U.S. Senate Majority Leader Chuck Schumer (D-New York) expressed the need for the federal government to embrace cannabis and said that legislation was on the way to make that happen.

On Wednesday, Schumer unveiled legislation that would decriminalize cannabis at the federal level, and establish a system for regulating and taxing interstate and international cannabis trade, among other initiatives.

That’s good news for the nation’s budding cannabis businesses, as well as real estate professionals and financiers looking to broker and fund deals for these companies.

The draft bill — co-authored by Schumer, Sen. Cory Booker (D-N.J.) and Sen. Ron Wyden (D-Ore.), the chamber’s finance chair — is called the Cannabis Administration and Opportunity Act. It would remove marijuana from the Controlled Substances Act and authorize the Federal Drug Administration (FDA) and the Treasury Department’s Alcohol and Tobacco Tax and Trade Bureau to oversee the production, distribution and sale of cannabis, effectively withdrawing the Drug Enforcement Administration from its role in policing it.

States would still be allowed to enforce their own laws around cannabis. The bill also calls for expunging nonviolent cannabis-related convictions from federal records, and directing fresh tax dollars generated from the new law toward supporting communities that have been negatively affected by federal cannabis prohibition and the war on drugs.

In February, Schumer, Booker and Wyden pledged to advance meaningful cannabis legislation in this congressional term. All three have been advocates for loosening or eliminating federal cannabis prohibition.

“It’s past time to bring our nation’s outdated, racist cannabis laws into the 21st century and ensure equal justice for Americans hurt by the failed war on drugs. Our legislation will do just that,” Wyden tweeted today. “[Schumer], [Booker] and I are all in to get this across the finish line in the next year. Voters across the country agree that it’s time to end federal prohibition. We’ll be working around the clock until we succeed.”

For years, the legal cannabis sector has been starved for cash to grow.

Traditional bank lenders that actually finance real estate occupied by cannabis businesses are typically very buttoned up about their activities — due to its federal illegality — and only reserve a limited amount of capital to deploy into the sector.

Nevertheless, over the last few years, cannabis financing has become more institutionalized as more and more states have moved to legalize medicinal and/or recreational use.

The growth prospects for the legal cannabis sector are immense. Legal sales in 2020, despite the COVID-19 pandemic, were more than $19 billion, and by 2025, annual sales in the U.S. could surpass $35 billion, according to information from New Frontier Data, which projects that the total U.S. market opportunity for legal sales from 2020 to 2025 sits at around $172 billion.

And, in a sign that financiers are becoming more aggressive in trying to get in on the strong returns that cannabis can generate, fundraising in cannabis more than tripled through May 2021, reaching about $6 billion, according to a mid-year 2021 report from New Frontier Data.

Despite broad support from American voters and eagerness from investors, cannabis reform has long been a nonstarter in Congress, mostly driven by a lack of support from Republicans. In December 2020, the MORE Act, a sweeping, progressive bill to decriminalize cannabis federally, passed through a Democrat-controlled U.S. House of Representatives, only to fizzle out. It was the first time that either chamber of Congress had supported the legalization of cannabis.

A whopping 91 percent of adult Americans think that cannabis should be legal, either for recreational and medicinal uses, or for medicinal alone, according to an April 2021 survey from the Pew Research Center. President Joe Biden himself has supported decriminalization, but not full-scale legalization. And about 43 percent of the adult population in the U.S., or around 141 million people, live in the 18 states that have legalized adult-use cannabis, according to New Frontier’s 2021 mid-year report.

Schumer, Booker and Wyden’s new push comes amid a flurry of recent legalization efforts and commentary about the U.S.’s flimsy approach to cannabis prohibition.

Last month, U.S. Supreme Court Justice Clarence Thomas — the longest-serving member of the court — criticized the federal government’s inconsistent approach to cannabis, after SCOTUS declined to hear a case from a lower bench that involved a medical cannabis dispensary in Colorado that was seeking to take advantage of federal tax breaks.

Justice Thomas’ comments came via a written statement, where he called out the government’s “mixed signals,” saying that “the federal government’s current approach is a half-in, half-out regime that simultaneously tolerates and forbids local use of marijuana. This contradictory and unstable state of affairs strains basic principles of federalism and conceals traps for the unwary.”

If the Senate legislation passes and Biden signs it, the U.S. would become only the third country in the world to fully legalize marijuana, behind Canada and Uruguay.