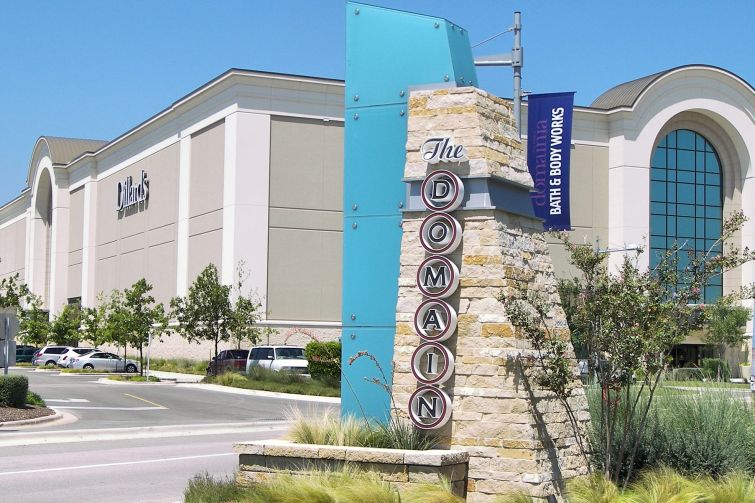 An image of one section of Simon Property Group's The Domain, with Dillard's in the background. Image: Larry D. Moore/ via Wikimedia

Bank of America and Goldman Sachs have co-originated $210 million in debt to refinance Simon Property Group’s sprawling retail and office development, The Domain, in Austin, Texas, according to analysis from Fitch Ratings.

The loan, originated on June 16, will pay interest to investors at a rate of 3.09 percent. Bank of America is contributing a $50 million portion of the financing to the Morgan Stanley-led MSC 2021-L6 conduit securitization; the remaining balance of the loan is expected to be contributed to other conduit deals in the future.

The open-air shopping center was valued by the lenders at around $452 million, meaning the mortgage was extended at a rather conservative loan-to-value of just 46.5 percent, per Fitch, whose analysis did not indicate that there was any subordinate financing included in the deal.

The Domain was built in 2007 and was renovated about three years ago. As of last month, the property — located at 11410 Century Oaks Terrace in Austin — is just over 93 percent leased out to a whopping 120 office, retail and restaurant tenants, per Fitch. Retail and restaurants make up about 82.4 percent of gross potential rent (GPR), and the office tenants make up nearly 18 percent of GPR.

The property’s location about 12 miles north of Downtown Austin and near major interstate thruways, strong leasing and retail sales fundamentals, and its granular rent roll are strengths of the mortgage, per Fitch. The Domain is surrounded by the presences of the likes of Apple, Amazon, IBM and Facebook, as well as multiple hotels and close to 1,000 multifamily units.

The Domain is anchored by prototypical clothing and sporting goods stores, like Macy’s, Dillard’s, Dick’s Sporting Goods and Neiman Marcus, as well as cinema chain IPIC Theaters, which provides unique amenities for viewers not found at the usual movie theater, such as plush seats, cocktails and in-theater service. Other retailers include Tesla, Louis Vuitton, Lululemon, Tiffany’s, and designer jewelry company David Yurman. It also has 20 food and beverage outlets, ranging from fine dining to fast casual.

The three largest tenants — Dick’s, Neiman Marcus, and medical office tenant Hanger (formerly known as Hanger Orthopedic Group) — take up about 27 percent of the asset’s net rentable area, while no other tenant occupies more than 4.2 percent of the space. Since 2014, the retail and office components of the property have sported average occupancy figures of 94.2 percent and 96.5 percent, respectively.

There are 59 CMBS loans on malls in Fitch’s ratings universe that are sponsored by Simon, and 10 of them are in special servicing. It was mostly the Class B malls and retail assets in oversaturated or secondary markets that felt the most heat from COVID-19.

The Domain’s pre-pandemic in-line sales per square foot was $625, which underscores its strength and the confidence CMBS lenders must have around including these types of properties in conduits. The shopping center closed for nearly two months before it reopened on May 1, 2020, and it did not necessarily wilt under the weight of the pandemic, given its Class A profile and location.

From April 2020 through the end of the year, Simon was able to collect about 71 percent of its rents at The Domain. Collections so far this year have come back healthy and are over 85 percent, per Fitch.