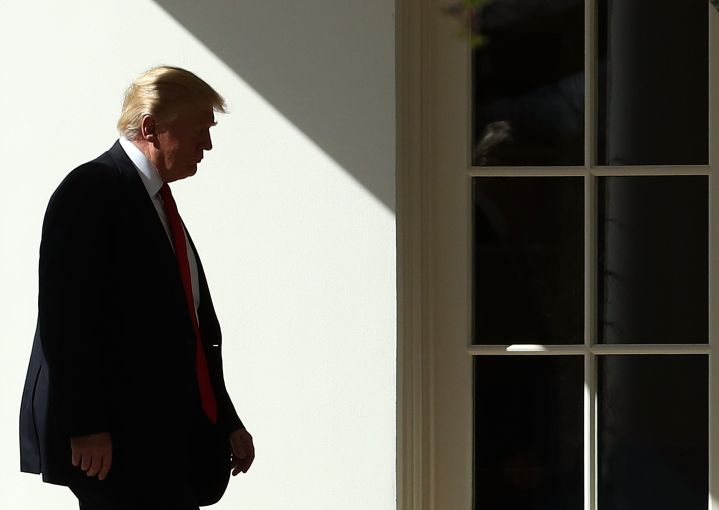 President Trump at the White House in 2017. Mark Wilson/Getty Images

The Wall Street Journal reported this morning that the Trump Organization and its chief financial officer, Allen Weisselberg, will be indicted Thursday by the Manhattan district attorney‘s office on tax-related charges.

Former President Donald Trump himself is not expected to be charged Thursday, WSJ reported. Weisselberg and his attorneys have yet to comment publicly about the investigation that has led to the likely charges. That investigation has hinged on Weisselberg allegedly evading taxes on fringe benefits that the Trump Organization provided him.

Trump, for his part, has blamed politics for the investigation by the office of Manhattan District Attorney Cyrus Vance, a Democrat.

“Having politically motivated prosecutors, people who actually got elected because they will ‘get Donald Trump,’ is a very dangerous thing for our Country,” Trump said in a statement Monday, one that also called the benefits that his firm allegedly gave Weisselberg “standard practice throughout the U.S. business community, and in no way a crime.”

The charges would be but the latest in a line of business woes for Trump and his company. After his supporters stormed the U.S. Capitol to try to overturn the 2020 election, Deutsche Bank, Trump’s largest conventional lender, announced it would no longer do business with him. Trump owes Deutsche $340 million, too — some of it personally guaranteed and all of it due within the next few years.

Signature Bank also dropped Trump not only as a business client, but also closed his personal accounts.

New York City itself moved after the Jan. 6 insurrection to get out of its contracts with Trump, including at the Wollman and Lasker ice-skating rinks in Central Park. And the company’s business, like a lot of firms tied to hospitality, sank like a stone during the pandemic, with revenues declining nearly 38 percent in 2020, to $278 million, according to financial disclosures at the time.

What’s more, several companies, including such real estate brokerages as Cushman & Wakefield and JLL as well as service vendors, followed the banks’ lead and dropped Trump as a client, either entirely or on specific projects. Even the literal “Trump” name is disappearing from properties in Florida and New York.

Still, Trump’s steepest business challenge might be the damage that his conduct over the past few years has done to his and his company’s brand. Carefully cultivated over decades as a kind of aspirational luxury, with a bit of swagger thrown in, “Trump” now means something else entirely.