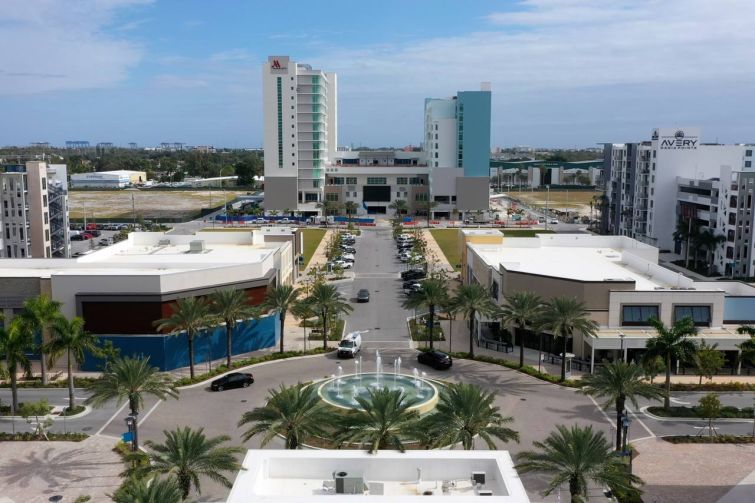 The Google descriptions say it all.

Both centers happen to be owned by New York-based Kimco Realty Corp., one of the nation’s largest owners and operators of open-air shopping centers. Watching Kimco juggle the two properties — one a lumbering center that’s getting ready for a face lift, and the other a fresh-to-the market, high-performing asset — offers an interesting case study on how retail landlords are navigating the changing terrain.

The firm picked up the complexes about five years ago, taking control of the 1990s-era, 112-acre Oakwood Plaza and the newly-constructed, 102-acre Dania Pointe, which opened its doors in 2018. Dania Pointe is pursuing a live-work-play strategy, with a mix of retailers, restaurants, a grocery store, apartments, hotel and office space in the works. Meanwhile, Oakwood Plaza is gearing up for its own revamp into a mixed-use center, and it appears to be taking cues from its flourishing neighbor across the street.

Kimco did not respond to a request for an interview to discuss possible scenarios for redeveloping Oakwood Plaza. But the company has proposed a regulatory land-use change for Oakwood Plaza that shows a commercial tilt in the property’s pending redevelopment.

The land-use change would set maximum amounts for four types of property uses at Oakwood Plaza: 1.8 million square feet of office space, 1.2 million square feet of retail space, 3,800 residential units and 625 hotel rooms. How much of each Kimco will include in its redevelopment will become clearer when the company proposes a site plan for approval by the City of Hollywood. A site-plan proposal would follow final approval of the land-use change, which requires the county and state governments to concur, a process that usually takes months to complete.

“Right now, when I think of Oakwood Plaza, I think of Home Depot and other big-box retailers. I go there when I have to do chores,” said Jaime Sturgis, CEO and founder of Native Realty, a brokerage firm in Fort Lauderdale. Kimco’s redevelopment of Oakwood Plaza is “an opportunity to create retail destinations that are more experiential, versus chore- or hobby-related.”

During a first-quarter earnings conference call in April, Kimco executives, while not mentioning Oakwood Plaza by name, made comments suggesting how such a property might evolve from a traditional shopping center to a mixed-use center. For example, food may loom large in a makeover of Oakwood Plaza. Its future tenant lineup may include a bigger selection of restaurants, similar to the choices diners have at Dania Pointe, as well as a grocery store.

Dania Pointe has been successful in recruiting Sprouts Farmers Market to its center. (Lucky’s Market had planned to become Dania Pointe’s grocer before the Colorado-based chain declared bankruptcy.)

“There is no doubt that the grocery-anchored shopping center is still the most in-demand category of retail, and continues to command the most aggressive pricing and the lowest cap rates,” Ross Cooper, president and chief investment officer of Kimco, said during the earnings call.

The pending makeover of Oakwood Plaza will retain at least part of its current big-box look, because Kimco has recruited a major tenant to occupy a former Kmart store there. City Furniture has leased the 114,764-square-foot store, and the Fort Lauderdale-based furniture retailer expects to finish remodeling the former Kmart in October, said Susan Brudzinski, managing director of store design at City Furniture.

City Furniture’s future location is near Oakwood Plaza’s Home Depot, one of the shopping center’s leading attractions. “That’s one of the largest Home Depots in volume, so it’s a great space for us,” said Brudzinski. “We’re right on Interstate 95, so we’ll be a huge draw for them, too.”

Asked how Kimco should redevelop Oakwood Plaza, Brudzinski said she hopes “they modernize the look and make it consistent with other new plazas.”

The shopping center’s vacant space in late April totaled 52,275 square feet across nine spaces ranging in size from 3,000 to 15,000 square feet. That equated to a vacancy rate of 5.7 percent. It would have been about 18 percent if Kimco had not found a new tenant for the old Kmart store.

The residential component of the redevelopment of Oakwood Plaza “will help to create the live-work-play component found to be so successful in the urban environment in South Florida, which is traditionally east of 95,” Sturgis said. “It could change the retail landscape there.”

While big-box stores still play an important role at retail centers, “there is more of an emphasis on smaller, more regional retailers and mom-and-pop shops,” Sturgis said.

Kimco has an ongoing program to redevelop and re-tenant its properties through projects that include large-scale demolition and construction and the subdivision of large anchor stores into multi-tenant layouts, according to the company’s 2020 annual report on file with the U.S. Securities and Exchange Commission.

Simply having a location in spendthrift South Florida is a retail advantage, said Andrew Hellinger, developer of River Landing Shops & Residences, an open-air, mixed-use center on a riverfront site in Miami.

“South Florida is a consumer environment,” he said. “We’re not big savers. We spend.”

Spending at River Landing Shops & Residences is anchored by a ground-floor Publix supermarket and a Hobby Lobby store on level two. Other tenants at the property along the Miami River include three apparel retailers that also have stores totaling about 86,000 square feet at Oakwood Plaza: Burlington, Old Navy, and Ross Dress for Less.

Hellinger said Kimco is likely to try to ensure that such retailers remain long-term tenants of Oakwood Plaza because they resist competition from online shopping sites. These tenants “are not online shopping vehicles,” he said. “You have to go to their store to see what item you can buy at a discount.”

After a lull in shopping and dining at Dania Pointe during earlier stages of the COVID-19 pandemic, “demand is really starting to build back,” Cooper said during the earnings call.

Two hotels at Dania Pointe — one bearing the Marriott brand, the other under Marriott’s AC Hotel brand — “will be opening in summer of this year,” Cooper said. Regal Cinemas, meanwhile, is holding onto its multi-screen theater at Oakwood Plaza while preparing to open a larger one at Dania Pointe this fall, and “we anticipate that to be a big draw.”

Also under construction at Dania Pointe is the new headquarters of Spirit Airlines, now based farther west in Miramar, a city in southwest Broward County. Next year, Spirit plans to move about 1,000 employees from the Miramar location to Dania Pointe after the $250 million development of its corporate campus is completed.

Meyers Group is planning to break ground in August for construction of the second phase of a 600-unit apartment complex at Dania Pointe, bearing the firm’s Avery brand. Aventura-based Meyers Group has leased about 80 percent of the 264-unit first phase of Avery Dania Pointe, said Alan Losada, president and chief operating officer of the multifamily and mixed-use development firm.

Young professionals, couples and families are renting apartments at Avery Dania Pointe at price points that start at $2.30 per square foot and will rise to $2.50 in phase two of the multifamily development, Losada said, citing higher construction costs. Many of the tenants work at nearby Fort Lauderdale-Hollywood International Airport and Port Everglades, he said, and, in addition, “we have a good number of people who work right there at Dania Pointe, like store managers and so forth.”

Meyers Group got a ground lease from Kimco for its apartment development site on the north side of Dania Pointe, and Losada said he has held off-and-on discussions with Kimco executives for more than a year about leasing land at Oakwood Plaza for a multifamily development with an indeterminate number of apartments.

“We are talking to them, but not about the number,” Losada said. “It’s kind of a natural move. We’re really happy at Dania Pointe with what it has become already, and fortunately, they’re happy with us as well.”

As mass vaccination against COVID-19 has progressed and economic growth has picked up, the leisure-time tenants at Dania Pointe are getting a boost from increased foot traffic.

“It’s really alive. On the weekends, it gets packed at the restaurants and bars,” Losada said. “We are happy. We thought it was going to be a slower recovery.” 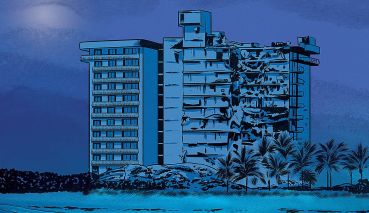 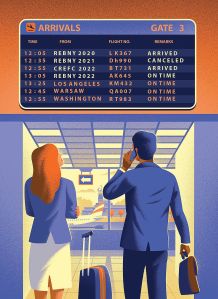