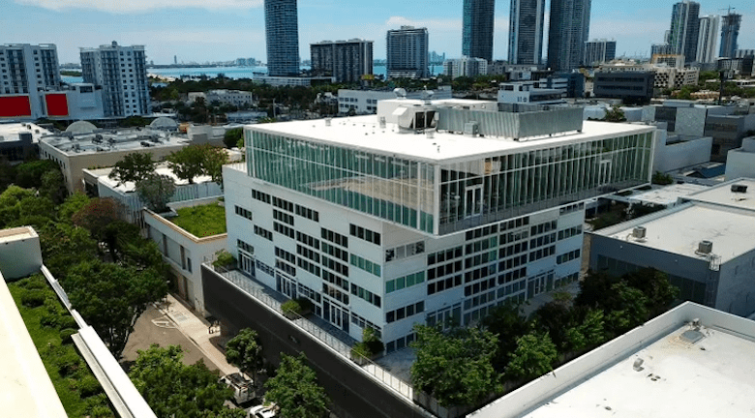 The company plans to open a flagship showroom and office on the top floor of the seven-story boutique building. It’s currently building out the space, which boasts 17-foot, floor-to-ceiling windows.

Frank Begrowicz of Cushman & Wakefield, who represented the tenant, declined to comment.

The deal closed at one of the highest office rents in the city, Arellano said, though he declined to share the exact rate. Office rents in the Biscayne submarket, which includes the Design District, experienced the largest hike in Miami-Dade County, jumping 15.4 percent to $51.14 per square foot between the first quarters of 2020 and 2021, according to C&W data.

Design 41 is a rarity in the Design District. “Most of what was office has been converted to retail,” Arellano explained. “This is one of the few examples of a true office building in the Miami Design District. The pricing reflects that.” (He declined to name the other tenants in the building).

Situated at 112 NE 41st Street, Design 41 sits in the heart of the trendy Design District, which is known for its sleek, modern architecture and luxury retail brands. Off-White and Gucci boutiques are located just across the street from BSH’s showroom.

The neighborhood’s popularity has grown over the past year as wealthy northerners, often working in tech and finance, have relocated to Miami. Consumers have also flocked to the open-air shopping districts, instead of indoor malls, to avoid COVID-19.

BSH will fit right in the swanky environment of the Design District. Gaggenau appliances are considered some of the most high-end on the market. In fact, all kitchens in Jeffrey Soffer’s new, uber-luxurious residential tower — Turnberry Ocean Club — in Sunny Isles Beach are decked out in Gaggenau ware.

BSH will also join high-end, home furnishings company Restoration Hardware. The retailer recently signed a lease for a property on the west end of the neighborhood, The Real Deal reported.

Headquartered in Munich, Germany, BSH Home Appliances is a subsidiary of BSH Hausgeräte GmbH, one of the largest European home appliances manufacturers.

The German firm has already made inroads in South Florida. It’s developing merchandise with Plum, a smart-kitchen appliance company based in Dania Beach, the South Florida Business Journal reported.

Update: This story has been updated since publication to reflect Thermador’s presence in the showroom.