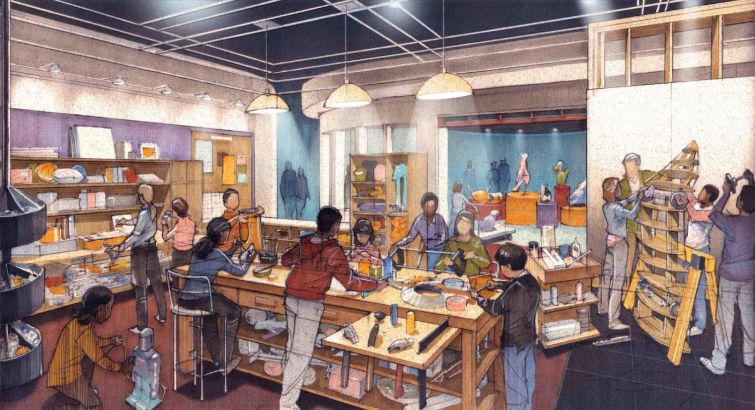 KID Museum is vastly expanding its footprint in Bethesda, Md.

The educational and experimental museum has signed a 10-year, 28,000-square-foot lease at 3 Bethesda Metro Center with landlord Brookfield Properties.

The museum will operate on the first floor of the 380,000-square-foot building, and will take control of the space in early 2022. It currently occupies 7,500 square feet in the Davis Library at 6400 Democracy Boulevard, also in Bethesda.

The space, which was previously used as an office, will be transformed into a studio that will offer programs in coding, robotics, electronics, textiles/fiber arts, 3D printing and more.

“The new space allows us to both go where the greatest need is, and build an accessible, dedicated space for hands-on, maker learning that engages youth of diverse backgrounds,” Cara Lesser, KID Museum’s founder and executive director, said in a prepared statement. “Our new space will emphasize how important it is to invest in our mission, which fuses STEM and social-emotional learning and helps build skills for the future.”

The new museum will also provide areas for KID Museum educators to collaborate with local schools and community partners.

Located steps away from the Bethesda Metro Station, the office building features a plaza and a 16-story atrium.

Construction is slated to begin later this summer, with an expected grand opening early next year. Other tenants in the building include RLJ Lodging Trust, Wells Fargo and Regus.

“We look forward to welcoming families to KID Museum’s new innovation hub at 3 Bethesda Metro Center,” Greg Meyer, Brookfield Properties’ executive vice president and head of the greater D.C. region, told Commercial Observer. “Now, more than ever, we are proud to support the museum’s growth plans and provide a new, accessible facility located just steps away from the metro that will enliven and activate this downtown hub with dynamic, educational programming for communities from across the D.C. region.”