Bringing the Flatiron Building Into the 21st Century 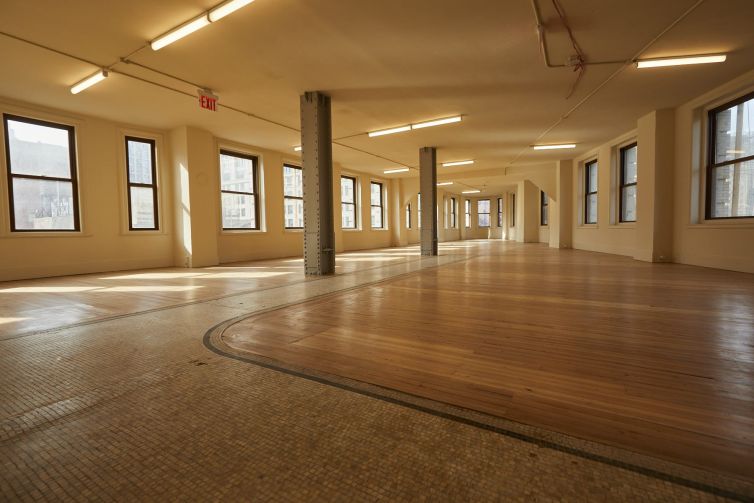 The lower floors of the Flatiron Building are being slowly renovated with their original floors intact, including mosaics meant to depict original common hallways. Photo credit: Emily Assiran for Commercial Observer 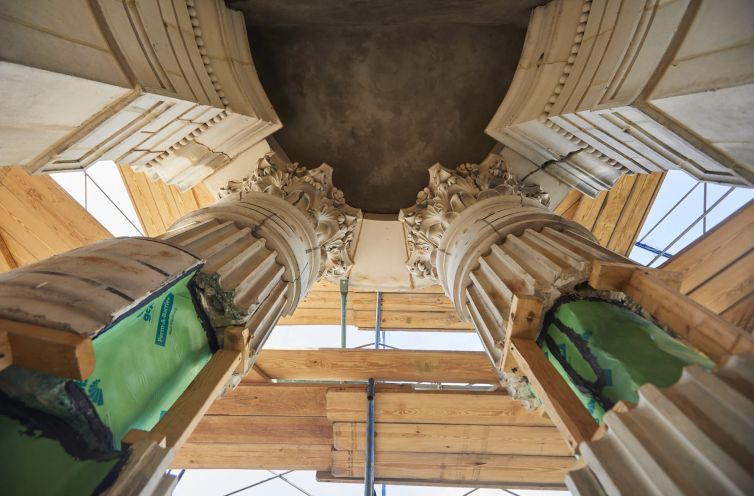 A look at the restoration of the sculptural columns that jut out onto the "prow" of the building on the 29th floor. Photo credit: Emily Assiran for Commercial Observer 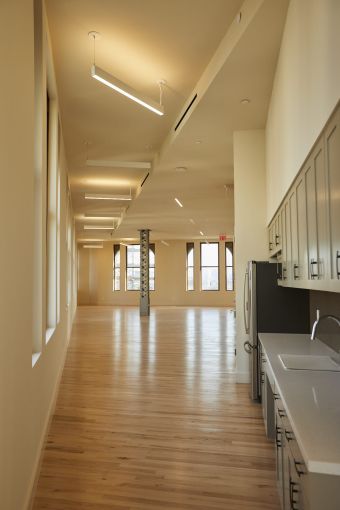 The 19th floor has been renovated into a marketing center with a modern gray and black office kitchen. Photo credit: Emily Assiran for Commercial Observer 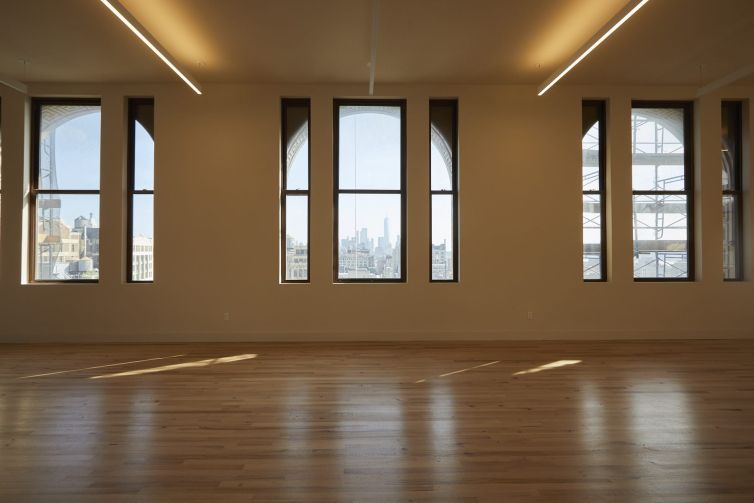 A look at the semicircular windows on the 19th floor. Photo credit: Emily Assiran for Commercial Observer 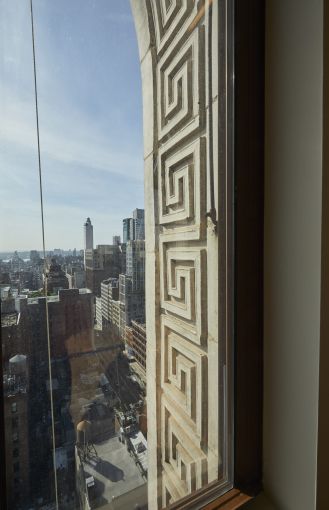 The half-moon windows are set into carved plaster and terra cotta elements that are being restored. Photo credit: Emily Assiran for Commercial Observer 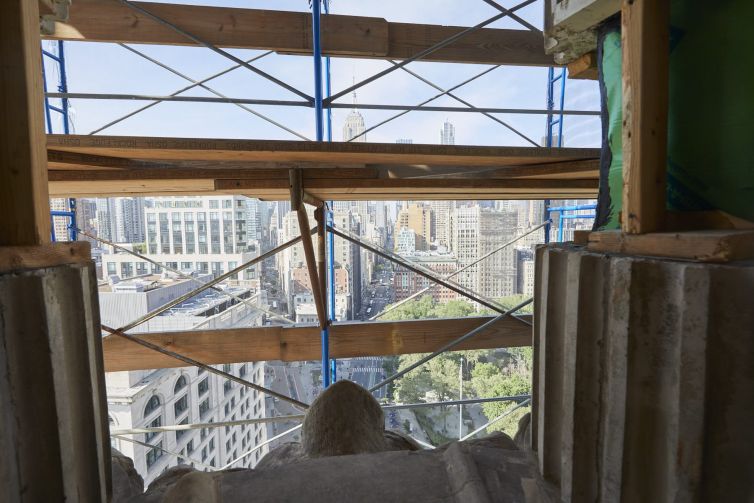 The view down Broadway from the 19th floor of the Flatiron Building. Photo credit: Emily Assiran for Commercial Observer 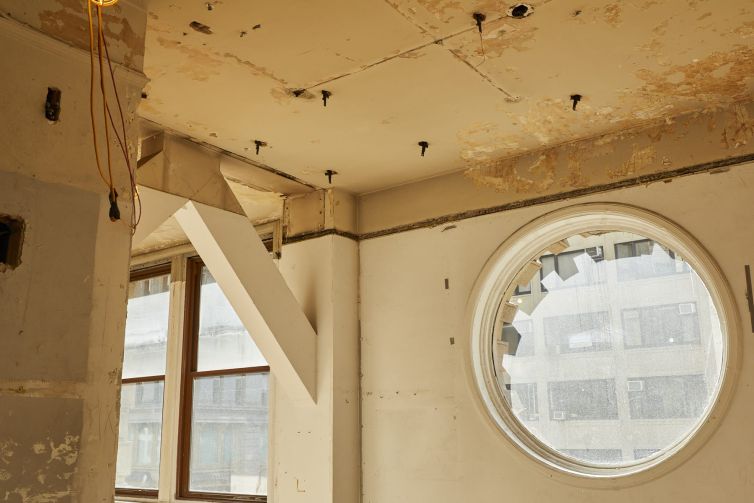 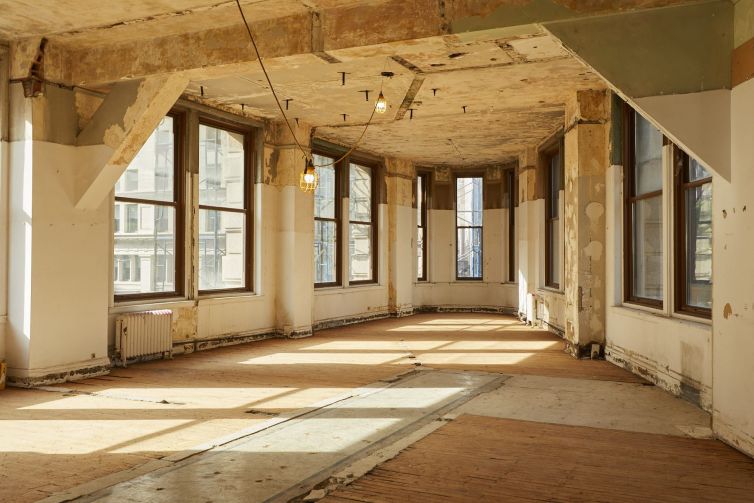 Another look at one of the less restored lower floors. Photo credit: Emily Assiran for Commercial Observer 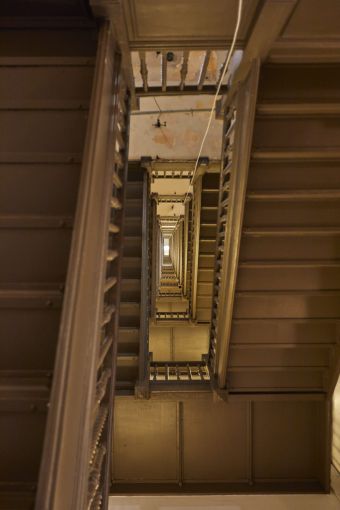 The staircase in the Flatiron is being completely disassembled as part of the renovation, because it's the only stairway that allows workers to exit in the event of a fire. The reconfigured core will include two staircases, new bathrooms on each floor and new destination dispatch elevator systems. Photo credit: Emily Assiran for Commercial Observer 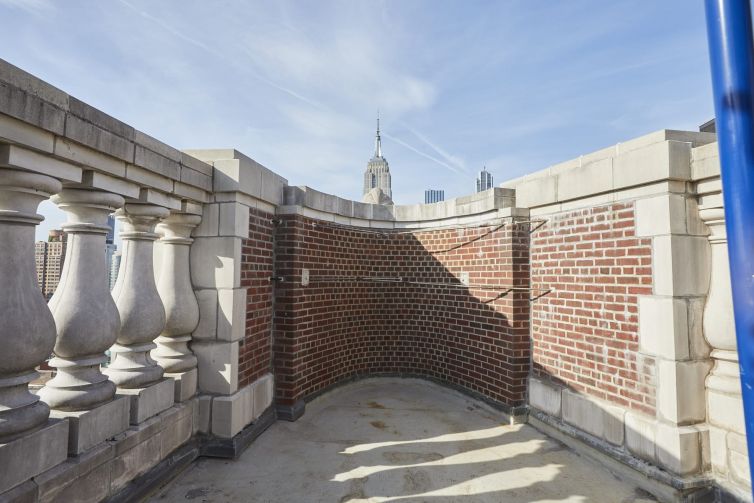 The top floor outdoor space is being converted into a private roof deck. Photo credit: Emily Assiran for Commercial Observer
Previous Next

When Macmillan Publishers decided to move its offices out of the Flatiron Building two years ago, the iconic curved structure on 23rd Street was completely vacant for the first time since its completion in 1902. Constructed and developed by pioneering general contractor George A. Fuller Company, the 22-story, Daniel Burnham-designed building was one of the first steel-framed high-rises in New York City.

Macmillan occupied the landmarked building continuously for nearly 70 years, signing its first lease in 1956 and quickly growing to become the 205,000-square-foot property’s only tenant.

That progression was understandable. The Flatiron Building’s relatively small 10,400-square-foot floor plates made it difficult to renovate while workers were in the building, which meant that it lacked a modern heating and cooling system. For decades, the beautiful terracotta facade was dotted with unsightly window air conditioners, and in the winter, the building was heated with radiators, powered by massive boilers in the basement.

Even basic plumbing was a challenge; so each floor only had a single-gender bathroom, either for men or women. The Flatiron also had hydraulic elevators until the early 1990s, powered by water heated in the basement.

When the building’s owners, GFP Real Estate, the Sorgente Group, Nathan Royce Silverstein and ABS Partners, decided to renovate the property two years ago, they quickly realized that it needed an $80 million soup-to-nuts upgrade. The architects at Beyer Blinder Belle, with help from CBRE, are restoring much of the historic facade, which has gotten chipped or broken over the years. Restorers in upstate New York are recasting 1,000 pieces of terra cotta from the exterior, so that the sculpture and tile will look original to the building when the construction scaffolding finally comes down.

BBB’s designers even researched Burnham’s buildings elsewhere in the country in order to design a new, historically appropriate lobby, because the current entryway is more 1980s than 1910s.

The Flatiron is also getting new destination dispatch elevators, new elevator cabs, new stairways, and new restrooms. Most of the windows have also been replaced, except for the curved ones at the corners of the facade, because they are difficult and expensive to manufacture. The original curved windows will remain for now, in their copper frames.

The new heating and cooling system will be an energy efficient variable refrigerant flow (VRF) setup, which allows temperature control on each floor. The original wooden floors and stone mosaics that line the main corridors of most of each floor are being stripped and restored when possible.

“We thought it was important to keep using the wood to maintain the authenticity of this building,” said Brett Shannon of CBRE, who is helping oversee the property’s leasing and redevelopment. “Because, imagine coming in here with these windows and everything, and then there’s a poured concrete floor like it’s an industrial building. That would be so sad, right?”

While most of the building is mid-renovation, the 19th floor has been converted to a marketing center. The wood floor gleams, the walls and ceiling are newly plastered and white-boxed, and a new gray-and-black office kitchen has been installed. The floor has large semicircular windows set back into elaborately carved openings. Upstairs, the 21st floor, which has six-foot-tall sculptural balustrades made of concrete, is being turned into a private roof deck.

As part of the renovation, 600 window air conditioners have been removed and stacked in the basement. The main cellar level is surprisingly large, extending past the building’s footprint and out into Fifth Avenue. The tracks of the N, Q and R trains run just on the other side of the basement wall. The subterranean space once held a tavern, and later a speakeasy that hosted jazz bands and could seat as many as 1,500 people. Shannon said he and his team hope to lease the basement to a high-end restaurateur.

Asking rents for the office space, which hit the market in March, range from $95 to $125 a square foot. Despite the building’s small floor plates, Shannon feels that larger companies might like the building if they wanted to put different divisions on different floors, like Macmillan did.

“We think there’s a market for larger tenants if they want to align their brand with the Flatiron Building and the recognition that comes with it,” he said. “Or something like a record label with all different smaller units, or venture capital or private equity with portfolio companies, where they all want to have one location. There’s a way to make these floor plates work for that, because they’re all acting as their own standalone companies.”